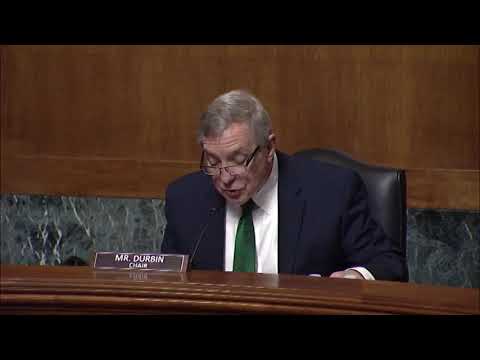 I caught a little of bit of today’s Senate Judiciary Committee hearing on the Equality Act. I did a brief post on it this morning after I learned about a constituency of Black Christian leaders who reject the Act and support Fairness for All.

The Fairness for All bill was put forward in the House last month by Rep. Chris Stewart (R-Utah). It is modeled on the 2015 measures adopted in his state, and its backers say their approach is the only one that will succeed in a deeply polarized Congress. Right now, the Equality Act has no Republican sponsors, and Fairness for All has no Democratic co-sponsors, though it does have the support ofsome more theologically conservative Democrats such as Michael Wear, who ran faith outreach for President Barack Obama.

“If you don’t see a logical, reasonable path forward to get what you want, and there are genuine concerns LGBT people are suffering without protections, isn’t there a way to try to get what you can now and come back for more later? Will we get something in a way that compromises, or will we be satisfied with these zero-sum approaches that empower Trumpian forces and don’t get anything done?” said Wear.

Troy Williams, executive director of Equality Utah, supports the Equality Act but says the deal struck in his state actually softened bias and led to other wins, including a ban on conversion therapy.

Critics of Fairness for All contend it’s worse than a compromise because they say it gives LGBTQ people less status in federal civil rights law than other protected classes such as race. Yet that is how some conservatives feel things should be.

In its primer on the act, the U.S. Conference of Catholic Bishops put quotes around “LGBT people” and say they are not subject to the kind of widespread discrimination that prompted the initial Civil Rights Act. “On the contrary, ‘LGBT’ people today are often held in high regard in the market, as well as the academy, local governments, and media. Some studies suggest that people who identify as homosexual earn higher incomes than the national average,” the group says.

It’s not clear what would happen if the Equality Act passed, whether conservative religious organizations would change their policies or choose to stoppartnering with the government.

“I think this moment presents a real challenge for Catholic groups. We need to walk that walk, to continue to serve everyone,” Balserak said. “I don’t think the concern is losing massive amounts of money. It’s being punished for the beliefs we hold.”

I have been getting up to speed on what I missed at today’s hearing from reading journalist Kelsey Dallas‘s live tweets from the hearing. Illinois senator Dick Durbin’s closing remark caught my attention:

By comparing religious organizations that uphold traditional views on marriage and sexual ethics to the Ku Klux Klan, Durbin is fanning the same flames that Ted Cruz, Josh Hawley, Tom Cotton, and other conservative senators fanned at this hearing. As I recently told CBS News, there are no simple solutions to this debate. It pits the 14th Amendment (civil rights for all Americans) against the 1st Amendment (religious freedom). It seems like both sides are too often talking past each other. I want the supporters of the Equality Act to say more about how it will influence Christian organizations that uphold traditional views on sexuality. I want the opponents of the Equality Act to talk more about LGBTQ rights.

Watch the hearing and decide for yourself:

Just to be clear, historic Christianity teaches that God created human beings male and female and the dignity and worth of all human beings. Samuel Rodriguez does not seem interested in this kind of nuance or complexity.