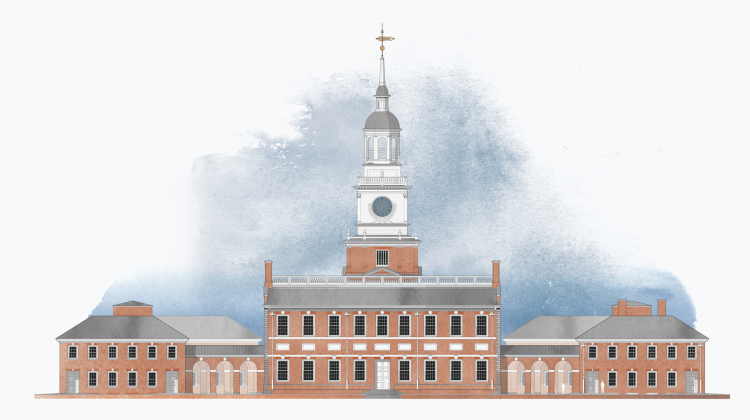 The building will house the Morris Family Center for Law and Liberty. It will open on July 4, 2022. This is a serious investment in God and country.

The Morris Center “is dedicated to the preservation and promotion of American Founding principles, limited government and liberty.” The plan is for the Morris Center to “evolve into an active public policy think tank.”

The Center for Law and Liberty at Houston Baptist University started as an academic initiative in 2013 to teach students American history, particularly the history of the U.S. Constitution and Revolutionary War. Now, thanks to a $10 million-plus gift from Stewart Morris, the university is adding new buildings for the center, including one partially modeled after Independence Hall in Philadelphia.

Morris’ 2018 gift, one of the largest in HBU’s history, will fund nearly half of the $23 million center. The remaining $13 million for the project comes from additional funds from Morris, other donors and university bonds. The four new buildings, totaling 37,726 square feet over 2 acres, will include the Independence Hall building, two attached side buildings and an unattached classroom. Another classroom building is being planned.

Christopher Hammons, rector of the center and a political science professor at HBU, said that the center was created when faculty saw that incoming freshmen didn’t have a solid understanding of early U.S. history. As the new center bloomed from an academic initiative to one that provided extracurriculars, faculty lectures, off-campus events, teacher workshops and more, Hammons and other center faculty found that they needed additional space.

“We started talking about what would a new building look like. Since we’re so devoted to this mission of teaching our nation’s history and our nation’s founding principles, a classroom building modeled after Independence Hall seemed like a natural sort of fit. Thematically, it fits what we’re trying to do. It sends an outward visible reminder of the mission of the Morris Family Center for Law and Liberty,” Hammons said.