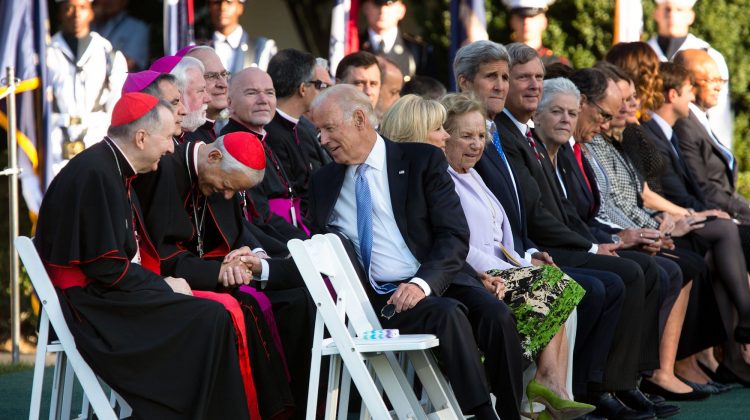 Or does Biden have a Catholic problem?

Green: When Kathleen Sebelius, who is Catholic, was the governor of Kansas, you asked her not to receive Communion. Is this something you have done with other public officials?

Naumann: I had several conversations with her over a couple-year period about this issue, wanting to make sure she understood its gravity. At some point, I said, “Governor, we have to bring some closure to this.” I said, “I don’t really want to publicly embarrass you, but I ask that you don’t do this, because it’s what we would call ‘scandal in the Church,’ which means she could lead others into error by her actions.” Obviously Governor Sebelius wasn’t happy with that. Some months later, one of our priests called me and said she had been at a Mass and had come to Communion. So I chose to make it public that I had made that request to her. I’ve talked to other legislators about this issue. We haven’t taken the same actions at this time with others.

President Biden is not my parishioner. Governor Sebelius was. But obviously the president impacts us all. I want to protect my people from being misled. His actions, right now, do mislead. They do create confusion for people in terms of what the Church believes and teaches.

Green: Do you believe the bishops should more widely discourage elected officials who support abortion from taking Communion, and should forbid priests from offering it to them?

Naumann: I do believe that we have an obligation as pastors to try to work for their spiritual good. If it’s a member of public life doing things that are moral evils, then I or their pastor need to help them be aware of the seriousness of what they’re doing.

Green: As I’m sure you know, American Catholics are split on abortion, on birth control—or, for that matter, on issues like the death penalty, which the pope has condemned in stark terms.

I wonder whether a public effort to deny Communion to the most visible Catholic in the United States, Joe Biden, could be hurtful to those Catholics who don’t line up perfectly with the Catholic Church.

Naumann: Why is the abortion issue so morally important to us? The bishops of the United States recently ratified a statement in which we called it the preeminent issue of our time. It attacks innocent human life when it’s most vulnerable. It happens within the context of the family and attacks the most precious of human relationships: that between a mother and a child. And the sheer numbers of abortions—there’s no other issue in terms of the numbers of lives destroyed. So that’s why. It’s not the only issue for us, obviously, but it’s one that we consider preeminent.

Biden has changed significantly over the years abortion. In 1977 he told the Syracuse Post-Standard that “it is outrageous to control a family’s overpopulation or convenience problems, yet that’s what has happened.” As a result, Biden concluded, the strength of the American family “is crumbling beneath our eyes.”