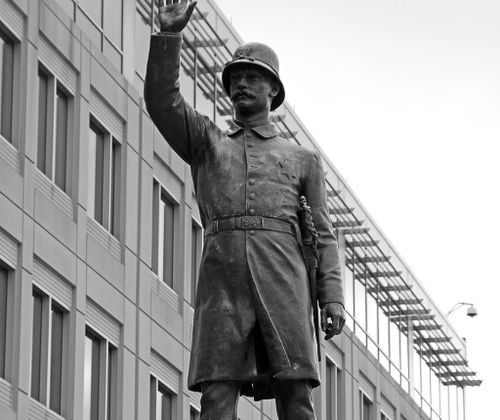 Last week we published a post on Chicago’s decision to consider removing some of its monuments. A city-sponsored group known as The Chicago Monuments Project have identified 41 monuments for public discussion because of the following issues:

In today’s Chicago Tribune, labor historian Timothy Messer-Kruse wonders if the Haymarket Riot monument belongs on the list. Here is a taste:

…the monuments committee went further and also red-tagged those statues that they deemed to represent “over-simplified, one-sided views of history” or that did not “sufficiently” include “other stories” of “women, people of color, and themes of labor.” They then created a paradox of Orwellian proportions by adding a final standard for public monuments: that monuments not create “tension between people who see value in these artworks and those who do not.” Apparently, the committee members didn’t appreciate that the less a memorial was “over-simplified” and “one-sided” the more “tension” it would inevitably generate.

One statue included in the committee’s target list highlights the difficulty of applying these standards, the Haymarket Riot Monument, which apparently made the list by breaking rule 4 (being one-sided), rule 5 (for not sufficiently including the story of labor) and certainly breaking rule 6 (by creating tension) since it has been bombed twice. The committee describes it as “a symbol of the polarized debate around labor activism and policing.” (It is unlikely the statue is condemned on the grounds of advancing white supremacy as Chicago was one of the first Northern cities to hire a Black police officer in 1872 and by 1930 had the second-largest number of Black police officers behind only Philadelphia.)

Cast in bronze by the Danish sculptor John Gelert in 1889, the Haymarket Monument was intended to honor the seven Chicago police officers killed by an anarchist bomb three years earlier. Gelert chose officer Thomas “Toon” Birmingham as his model for Toon’s slightly plump ordinariness (perhaps as a protest against his patron’s rejection of his original lyric design of a woman holding a law book above her head). Leaders of the Union League that raised the funds later complained that Toon looked “too Irish.”

Toon Birmingham was promptly forgotten, the target of pigeons rather than violent protest. In 1896 a newspaper editor bemoaned that the great monument was neglected to the point of ruin. There was surprisingly little opposition when, at the urging of Haymarket Square business owners, it was relocated miles away to the entrance of Union Park. In 1958 after being knocked over by a streetcar, it was returned to its original site in Haymarket Square, where it stood peacefully and uncontroversially until 1969 when it was blown up (twice) by the Weathermen. Rather than risk a third attack, Mayor Richard J. Daley moved Toon Birmingham to the well-guarded lobby of the police training center.

The dynamite bomb that toppled Toon Birmingham was cooked up from household chemicals following instructions provided by DuPont in a helpful publication they sent to anyone for $6, “The Blasters’ Handbook” (whose first page was emblazoned, “From America’s oldest explosive company come the newest explosive ideas!”). One of the Weathermen later explained that they wanted to blow up the Haymarket statue because to them it was a symbol of police repression of free speech and government injustice.

There is an analog of our present moment to be found in this history. How this forgotten statue that neither its creator nor its sponsors particularly liked suddenly became charged with meaning amid mass public protests (in this case the Days of Rage rather than Black Lives Matter) should remind us that monuments don’t possess meaning — they only mean what the living think of them as meaning. To the generation that erected the Haymarket Monument it was meant to memorialize the slain officers and the importance of the rule of law. To the youth of the 1960s, it represented police repression of protest, a problem with which they were well acquainted.

When the Haymarket Monument was dedicated in 1889, most Chicagoans had little doubt that the fallen police officers were victims of an anarchist plot to overthrow the republic. In 1969, a new historical consensus coalesced that viewed the four anarchists hanged for the Haymarket bombing as innocent victims of the nation’s first red scare. Both perspectives contained large portions of both truth and myth. Given the complexity of the events that created it, the Haymarket statue cannot easily be labeled as “selective,” “over-simplified” or “one-sided”.