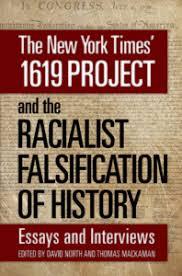 Here are the endorsements, including one from yours truly:

“The controversy over the serious flaws in the 1619 Project’s accounts of American history began with the WSWS’s interviews of numerous highly distinguished liberal and left scholars. Their calm and precise critiques and others met with no rebuttal, only evasive dismissal by the project’s overseers. Even now, despite ‘clarification’ and silent editing, glaring factual errors remain in the project’s materials. This volume vindicates W. E. B. Du Bois’s condemnation of propaganda disguised as history.”
— Sean Wilentz, Princeton University, Bancroft Prize-winning author of The Rise of American Democracy: Jefferson to Lincoln

“Although not everyone will agree with all of its arguments, this volume presents a powerful critique of the New York Times’ 1619 Project and deserves a wide readership. The contributors to that Project incorrectly maintain that slavery was a uniquely American evil, that a principal motive of those who engaged in the American Revolution was to defend slavery, that virtually no white Americans opposed slavery, and—ignoring the extensive attention of scholars during the past half century—that slavery and antiblack racism represent the ‘suppressed history’ of the United States. The Project’s authors essentialize race, arguing that throughout American history virtually all white Americans have displayed an unchanging antiblack racism that ‘runs in the very DNA of this country.’ In essays first published on the World Socialist Web Site, and in interviews with several prominent historians, these arguments receive convincing refutation.”
— Peter Kolchin, University of Delaware, Bancroft Prize-winning author of Unfree Labor: American Slavery and Russian Serfdom

“This book is essential in two ways: it helps you realize how historically inaccurate the 1619 Project is and how fundamentally reactionary its politics are. Everyone interested in understanding what actually happened then and what’s actually happening now needs to read it.”
— Walter Benn Michaels, Department of English, University of Illinois Chicago, author of The Trouble with Diversity: How We Learned to Love Identity and Ignore Inequality

“Fears of association with Trump and his white-supremacist allies can inhibit leftist criticism of the 1619 Project. But from a bold socialist-revolutionary perspective, Mackaman’s and North’s volume argues cogently that the 1619 Project misinterprets historical causes and effects by positing eternal and immutable cultural or ‘racial’ identities that deny past—and preclude present and future—collective action against capitalist and imperial power.”
— Kerby Miller, University of Missouri, Pulitzer Prize finalist author of Emigrants and Exiles: Ireland and the Irish Exodus to North America

“The breadth and lucidity of its arguments, paired to its intelligent defense of the great revolutionary and democratic traditions of the United States, should commend this book to the broadest readership in ordinary times. But the publication of this extraordinary volume in today’s climate of accelerating crisis signals, at last, the beginning of a struggle against the complacent, racialist, disingenuously ‘intersectional,’ and unalloyedly reactionary conceptions dominating academia and the broader political discourse.”
— Emanuele Saccarelli, Department of Political Science, San Diego State University

“The publication of the 1619 Project has prompted a robust conversation about the relationship between slavery, racism, and the American founding. David North and Thomas Mackaman have been important players in this conversation. They have gathered an impressive array of American historians to critique the 1619 Project, making this book essential reading for anyone interested in a nuanced and informed take on an issue that is central to our democratic life.”
— John Fea, Messiah University, author of Why Study History: Reflecting on the Importance of the Past

“The New York Times’ 1619 Project and the Racialist Falsification of History is a brave and necessary response to the errors in fact and interpretation that characterize the 1619 Project. It may be that the survival of the historical profession as a legitimate enterprise depends on this critique being heard.”
— William E. Weeks, Department of History, San Diego State University, author of Building the Continental Empire

“[A] frank, refreshing, and unrelenting critique of the 1619 Project. In the age of cancel culture, identity politics, Twitterstars, and the toxic Trump nightmare, much of academia has fallen silent as the 1619 Project wrenched the American Revolution and the institution of slavery from their global historical context, dismissed Abraham Lincoln as a run-of-the-mill racist, and skipped like a river rock over the abolitionist movement, Civil War, and more than fifty years of historiography. The spell that the 1619 Project cast on academia makes the publication of this book all the more timely and important.”
— Gregg Andrews, Department of History, Texas State University, author of Thyra J. Edwards, Black Activist in the Global Freedom Struggle

“This is a conscientious collection of criticisms of the New York Times’1619 Project. It includes interviews with eminent historians; especially valuable is that of Richard Carwardine, who provides a perspective from overseas. The documents expose the shortcomings in the Project and the extent to which the Times has withdrawn and minimized the most exaggerated aspects of the 1619 Project. The collection would be even more valuable if it included documents from the New York Times as well as from its critics.”
— Daniel Walker Howe, University of California, Los Angeles, Pulitzer Prize-winning author of What Hath God Wrought

“You don’t have to agree with the historical interpretations of Leon Trotsky’s old Fourth International to respect and benefit from the institutional stance it has taken—almost alone—against the false statements printed, and sensationalized, by the New York Times in the introduction to its ‘1619’ series. All who care about this nation’s history of slavery and racism, and all who reject the efforts of powerful institutions to falsify that history, should read the interviews of eight reputable scholars reprinted here. Those eight interviews—along with public statements made elsewhere by historians Leslie Harris and Peter Coclanis—call the New York Times to account for its dishonesty. They show that we can still rely on some academic professionals—if only these ten—to demand and defend the truth about our racist past. The historians’ profession as a whole declined to hold ‘the’ Times responsible for its falsehoods—even as that once distinguished paper began to hype its false mythology as a pre-fab curriculum for unsuspecting public schools. ‘1619’ boosters are still offering the curriculum as a magical way for schools to inoculate themselves against charges of racism. Most of the historical profession continues to temporize, prevaricate, or remain conspicuously off the record. Thus the profession enables the Trump administration’s equal and opposite mythology, ‘1776,’ to occupy the only alternative space in the broad public view of our mass-mediated world. The alleged paper of record could have discreetly retracted its mistakes, in time-honored fashion, and moved on. Instead, it insisted it had nothing to apologize for. It presents itself, almost unchallenged, as the authority best equipped to reform America’s history curriculum and, more hilariously, as the vanguard of a new mass movement of opposition to racism. This book contains enough material to show that honest students of the American past, and honest journalists, can do better. Interested readers can get the honesty they deserve, if they are willing to demand it. I’m dropping my subscription to the NY Times long enough to pay for this book.”
— David Chappell, University of Oklahoma, author of A Stone of Hope and Waking from the Dream

Listen to my interview with Thomas Mackaman at episode 63 of The Way of Improvement Leads Home Podcast.