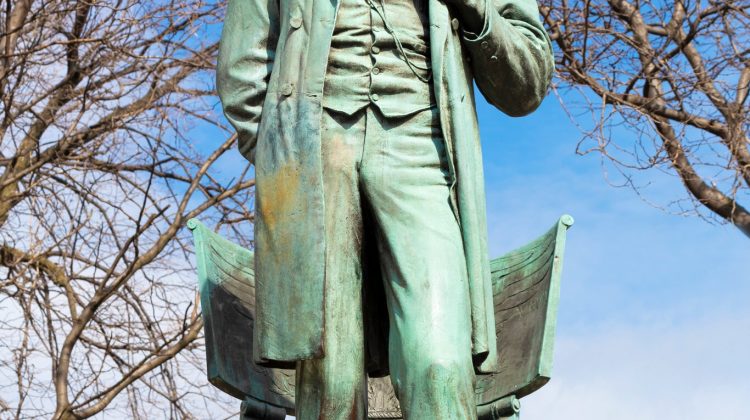 The city of Chicago recently launched a group called The Chicago Monuments Project. Here is the project’s mission statement:

The Chicago Monuments Project intends to grapple with the often unacknowledged – or forgotten – history associated with the City’s various municipal art collections and provides a vehicle to address the hard truths of Chicago’s racial history, confront the ways in which that history has and has not been memorialized, and develop a framework for marking public space that elevates new ways to memorialize Chicago’s history more equitably and accurately.

The project has four main objectives, including:

The project has identified 41 statues, including five Abraham Lincoln statues, that are “worthy of conversation.” Mayor Lisa Lightfoot’s administration has asked the public to review the monuments that have been identified and share their opinions on the role of monuments in Chicago’s public spaces.

Here is more from the Chicago Tribune:

But as the nation continues to face a racial reckoning sparked by protests that began with last year’s police killing of George Floyd in Minneapolis, many long-revered figures of American history, and the monuments honoring them, have come under fresh scrutiny. Lincoln is no exception.

“Lincoln is without a doubt … the most famous Illinoisan. He is a president from Illinois who helped preserve the union. His importance to the state of Illinois is undeniable,” said Jacob Friefeld, a historian at the Abraham Lincoln Presidential Library in Springfield. “Each community, though, has to decide if Lincoln is the person they want representing their community.”

Lincoln is revered for abolishing slavery in the South, but his policies that harmed Native Americans are a primary concern for his legacy, said Adam Green, a member of the Chicago Monuments Project advisory committee and professor of American history at the University of Chicago.

“Lincoln is, both as a citizen and as a president, a complicated figure,” Green said. “At the same time that Lincoln was engaged in the policies that he followed as president in relation to the institution of slavery and its eventual impact on African Americans, Lincoln was also someone who was very committed to the policy of Indian removal.”

While waging war and working to end slavery, Lincoln also sought to build a more powerful nation and government through expansion.

“Many of those positions precisely required his commitment to a policy of active, aggressive, and at times violent Indian removal” in order to distribute land to white settlers, Green said.

In a particularly egregious case, 38 men of the Dakota tribe were hanged as a result of actions they were accused of during the Dakota War of 1862. Though Lincoln reduced the death toll by commuting over 200 sentences, his enforcement of capital punishment resulted in the largest mass execution in American history.

Over at the Trotskyist World Socialist Web Site, historian Tom Mackaman has entered Lightfoot’s conversation on the side of preserving the Lincoln statues. Here is a taste of his piece:

Historical ironies abound. Lincoln would surely not recognize today’s Republican Party as his own. The attempted fascist coup of January 6, and the Republicans’ refusal to recognize the outcome of the election, finds a parallel instead in the actions of the southern Democrats in 1860, who made war “rather than let the nation survive” in response to his own election, as Lincoln put it in his Second Inaugural.

But Lincoln would recognize something of today’s Democratic Party. In his own time, he tangled with the period’s foremost Democrat, Stephen A. Douglas—whose statue in Chicago is not on Lightfoot’s list—in their famous series of debates in small Illinois towns in 1856 and going forward to the election of 1860, in which Douglas stood for a Democratic Party that had been split, North and South.

Lincoln’s struggle against Douglas followed a pattern. Lincoln wanted to talk about slavery. Douglas wanted to talk about race. Lincoln wished to mobilize the electorate against the further expansion of slavery, a system of extreme labor exploitation that denied the most fundamental right to self-ownership and offended the founding American principle of equality. Douglas, in turn, sought to obscure slavery through the promotion of the idea of permanent racial differences.

When Douglas said, for example, that Lincoln wanted to end slavery so that he could “amalgamate” the races and take a black wife, Lincoln understood Douglas’ method as an appeal to racism. But Lincoln nonetheless insisted, of the hypothetical black woman, that “in her natural right to eat the bread she earns with her own hands without asking leave of any one else, she is my equal, and the equal of all others.”

One-hundred-and-seventy-five years later, a black woman is mayor of Chicago and heads up its Democratic Party, an outcome made possible by the Civil War—and one which Douglas in his most fevered rhetoric never could have imagined. But in a more fundamental sense Lightfoot is Douglas’ direct political descendent.

Like Douglas in the 1850s, Lightfoot does not want any discussion of labor exploitation. The mayor has just sent tens of thousands of workers—teachers and staff—back into unsafe classrooms in the middle of the COVID-19 pandemic, which scientists warn is on the verge of its deadliest explosion yet. There are 500,000 Chicagoans who live below the official poverty line, and, according to one food charity, the city is experiencing its “biggest hunger crisis ever,” with 800,000 people not having enough to eat. Meanwhile, some $60 billion in wealth is horded by Illinois billionaires, a group headlined by Lightfoot’s Chicago allies Oprah Winfrey and the Pritzker family. Naturally enough, just as Douglas did before her, Lightfoot wants to talk about race, not class. This is the real aim of her Monuments Project.