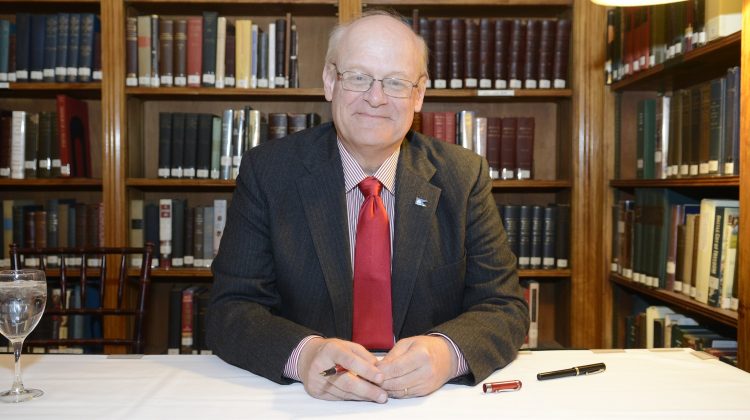 Deborah Yaffe just published a great feature on American historian Allen Guelzo, Director of the Initiative on Politics and Statesmanship at Princeton’s James Madison Program. The piece, published at the Princeton University alumni magazine, covers Guelzo’s role in the rollout of Donald Trump’s 1776 Commission and his efforts to break into academia with degrees from Philadelphia College of Bible (my alma mater, now Cairn University) and Reformed Episcopal Theological Seminary.

Here are a few snippets from the piece:

Initially, Guelzo says, he saw nothing unusual about his decision to attend the conference: After all, he had served on the National Council on the Humanities during both the Obama and George W. Bush administrations and, in 2010, had been appointed by Speaker Nancy Pelosi to the committee seeking a replacement for the historian of the House of Representatives. When the Trump White House called a week before the conference, Guelzo says he saw only a chance to talk about a pet concern: the problematic state of history education in the United States, at both the college and pre-college levels. “If this had been billed to me as a Donald Trump reelection event, I would have said no,” Guelzo says. “I don’t do reelection events. I do history.”

To critics, however, the conference’s partisan nature seemed obvious. “I think I speak for all of us when I say how blessed we are to have a leader like President Trump,” Ben Carson, the secretary of Housing and Urban Development, said in his opening remarks. Two other panelists described the summer’s police-brutality protests as “riots” and linked the violence to leftist bias in the teaching of history. “There have been times when the main political forces in both parties were friendly to educational reform and decentralization,” said moderator Larry P. Arnn, the president of Michigan’s Hillsdale College. “This is not such a time, so we have some big decisions to make in the next few weeks.”

Guelzo’s own remarks lasted just over 10 minutes, and in the cavernous, echoing rotunda of the National Archives, he says he could hear little of what his fellow panelists were saying — and, in any case, doesn’t necessarily endorse the views of everyone with whom he shares a stage. “I will take the opportunity of any platform offered me short of outright tyrants, depraved fools, and genocidal murderers to talk about American history,” he wrote in a defense of his appearance published weeks later by the online History News Network.

School provided a welcome escape, but finances limited his college choice to a small Christian school, Philadelphia College of Bible. “It was either that or I was going to become a paper-hanger like my grandfather,” Guelzo says. Initially, he trained for the ministry, earning a bachelor’s degree in pastoral studies and then a master’s in theology, the equivalent of ordination, from the Pennsylvania seminary of the theologically conservative Reformed Episcopal denomination.

Throughout, history remained a passion. “Always loved history. Never understood why people said, ‘Oh, history — that’s so boring,’ ” Guelzo says. “I thought, ‘Boring? How could that be boring? It’s like a constant movie going on in your head.’”

As Guelzo embarked upon his professional history training, however, his religious background repeatedly seemed to confound the denizens of secular academia. Concerned about enrolling a student from a little-known Bible college, faculty at the University of Pennsylvania conditioned his admission to their history doctoral program on his grades in master-level coursework. When Guelzo aced those courses, says Alan Charles Kors ’64, a now-retired Penn historian, a faculty gatekeeper unsuccessfully argued against passing Guelzo on to the Ph.D. program — what was the point, if he was going to end up teaching at a Bible college? And when Guelzo — by then a graduate of two Christian institutions and the author of a dissertation on the 18th-century theologian (and, briefly, Princeton president) Jonathan Edwards — began looking for an academic job, a Penn faculty member warned him that “the slightest whiff of religion on your résumé is the kiss of death,” Guelzo says.

Finally, here is a section of the piece on Guelzo’s dramatic lecture style:

In person — or, at least, in person via Zoom — Guelzo, 68, comes across as affable and preternaturally articulate. He quotes Lincoln-related sources from memory, reels off polished historical anecdotes, and riffs knowledgeably on the role of the double bass in orchestral music. Colleagues describe someone with a sharp sense of humor, a prodigious memory for historical and cultural arcana, and a forceful personality. “He is no wallflower,” says Lucas Morel, a fellow Lincoln scholar who heads the politics department at Washington and Lee University. “At parties, he’s got more than one story to share. He’s got a bit of a dramatic flair to him.”

Guelzo puts that dramatic flair to use in a sonorous, theatrical mode of public presentation that Gary W. Gallagher, a retired professor of history at the University of Virginia, calls a “spread-eagle style of lecturing.” On stage, Guelzo is a commanding presence, standing 6 feet 4 — the same height as Lincoln — and, with his balding dome, high forehead, and deep-set eyes, bearing a slight resemblance to the actor Kelsey Grammer. Guelzo “has a great voice for radio, and he uses gestures, and he moves around,” Gallagher says. “It’s a kind of 19th-century style of speaking.”