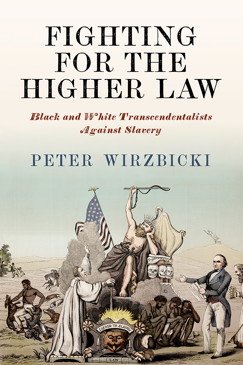 Peter Wirzbicki is Assistant Professor of History at Princeton University. This interview is based on his new book, Fighting for the Higher Law: Black and White Transcendentalists Against Slavery (University of Pennsylvania Press, 2021).

JF: What led you to write Fighting for the Higher Law?

JF: In two sentences, what is the argument of Fighting for the Higher Law?

JF: Why do we need to read Fighting for the Higher Law?

PW: I hope you will read Fighting for the Higher Law for two main reasons. First, I hope it will convince you that American Transcendentalists were crucial figures in American political thought and the development of American democratic ideals. Recent work on the intellectual origins of American democracy emphasize the balance and moderation of the Scottish Common Sense School or the epistemological humility of the Pragmatists, and too often leave out the idealism, utopianism, and moral radicalism of the abolitionist generation. Thanks to the influence of Transcendentalism, antebellum radicals developed what I call the Higher Law ethos, an approach to politics that was central to the abolitionist movement and helped shape later activist groups, from labor organizers to the Civil Rights movement. Second, in my book you will see important connections between black abolitionists and canonical American literature. You will see moments of interaction between black abolitionist like William C. Nell, Lewis Hayden, and Charlotte Forten with more famous white thinkers and writers.

PW: I guess I always liked thinking historically. I grew up in Connecticut in a house that was built in 1792. I loved visiting battlefields as a kid. But also, a great deal of credit must go to my college professor, Bruce Dorsey, who took a chance and hired me as a research assistant after my junior year of college. I just needed a job! But I spent the summer poring through old newspapers in dusty archives and came to love it. To me, the most wonderful thing about history is that when done well, it’s an exercise in radical empathy, in trying to get inside the heads of people who lived in completely different times and places, to do our best to try to understand how and why people thought and acted as they did under such different circumstances than we do today.

PW: I am working on a project on political philosophy in the age of the Civil War and Reconstruction. What comprised the mixture of ideas, thinkers, and activists who shaped the ideological origins of Reconstruction? These are mostly Northern thinkers that wrote about questions of democracy, sovereignty, nationalism, and race in the era of the Civil War. I’m trying to see Reconstruction as its own moment in intellectual history—not as simply fulfillment of antebellum ideas nor as prelude to Gilded Age liberalism. Rather I think there is a real flowering of quite robust ideas about democracy in the period that shaped, in quite meaningful ways, the remaking of American political life.