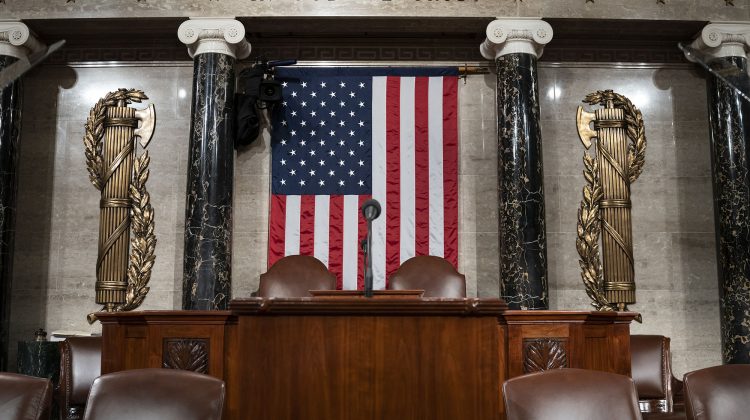 Conservative Christians are irate about what happened recently on the floor of the House of Representatives. During a debate on the Equality Act, Florida congressman Greg Steube argued against the act by reading Deuteronomy 22:5 and a passage from a commentary written by popular evangelical preacher Tony Evans. When Steube finished with his speech, New York Congressman Jerry Nadler said, “What any religious tradition describes as God’s will is no concern of this Congress.” Watch:

As might be expected, Family Research Council president Tony “Mulligan” Perkins seized on this. In an interview with Perkins, Steube doubled-down. He said he was not representing a “religious tradition” (as Nadler said), but the “word of God.” Watch:

Steube has every right to believe the Bible is the word of God. He is free to believe Tony Evans’s interpretation of Deuteronomy 22:5. He is even free to be personally opposed to the Equality Act based upon his religious convictions.

But the United States is not a Christian nation. This means that when Steube enters public discourse he must make an argument that appeals to all human beings–those who believe the Bible is the word of God and those who do not. This is why the founders believed in the separation of church and state. They created a nation built upon the principles of the Enlightenment, a culture in which arguments must be made from evidence-based reason or universal principles. (Many conservative Catholics, for example, argue against the Equality Act from a position rooted in natural law). The founders wanted to avoid a situation in which a member of Congress tried to legislate based upon special revelation, whether it be the Bible or the direct voice of God.

I am reminded here of some of the evangelical responses to the 2020 presidential election. People like Eric Metaxas or Lance Wallnau believe in election fraud conspiracy theories because God revealed to them that the Democrats, agents of Satan, stole the election. But that is not how things work in a Democratic-Republic. You cannot legitimately protest election results with appeals to divine revelation. This kind of anti-Democratic Christian nationalism was on full display on January 6, 2021.

Many good Christian theologians have made a case that marriage is between one man and one woman or that homosexuality is a sin. But as soon as we invoke the Bible in a secular republic we run into all kinds of problems. For example, the “word of God” teaches adultery is a sin. Does that mean we should put adulterers in jail? Or maybe we should put a scarlet letter on adulterers and parade them through the streets.

I will say it again: we do not live in a Christian nation. Jerry Nadler was correct when he said that Congress is not in the business of trying to discern the will of God. The words “In God We Trust” in the U.S. Capitol are vague references to civil religion, not clarion calls to make appeals to God or the Bible to justify or oppose legislation.

Did Steube accomplish anything, apart from virtue signaling, by reading Tony Evans’s commentary on the floor of the U.S. Senate? Did he persuade others that the Equality Act is morally or constitutionally problematic and needs to be rejected by the House? No. He was no earthly good. As Jesus told the disciples in Matthew 10:16: “I am sending you out like sheep among wolves. Therefore be as shrewd as snakes and as innocent as doves.” Steube was neither. But he did manage to fire-up Tony Perkins and the rest of the Christian Right base and launch another grenade in the culture war tearing apart this country.