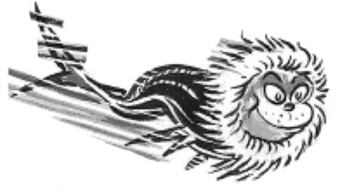 In case you haven’t heard, Seuss Enterprises will no longer publish six Dr. Seuss (Theodore Geisel) books because they “portray people in ways that are hurtful and wrong.” They are:

Seuss Enterprises pulled Mulberry Street because it includes an illustration of an Asian man wearing a conical hat holding chopsticks and eating from a bowl:

Seuss Enterprises pulled If I Ran the Zoo because it includes stereotypes of African and Chinese men:

Seuss Enterprises pulled McElligott’s Pool because it uses the term “Eskimo” and depicts an “Eskimo Fish”:

Seuss Enterprises pulled On Beyond Zebra and Scrambled Eggs Super because they include Arab stereotypes.

Read all about it at The New York Times.

I am a Dr. Seuss fan. Back in 2004 I wrote an op-ed to commemorate the 100th anniversary of his birth. Knight-Ridder News Service distributed it. Here is that piece:

While most of us have probably never heard of Theodor Geisel, we know his work well. Writing under the name “Dr. Seuss” (Seuss was his middle name), Geisel unveiled to millions of children the values that have defined the human experience. Random House, the publisher of most of his books, has proclaimed 2004 the “Seussentennial,” a year-long commemoration of Geisel’s work.

Geisel’s books have expanded our imagination, encouraged our sense of self-worth and challenged us to make the world and our local communities better places. They’ve also reminded us that the ideals of freedom, individualism and liberty have always existed in tension with community, restraint and personal sacrifice.

Born in Springfield, Mass., Geisel spent most of his life living and writing from his home in a remodeled naval observation tower in La Jolla, Calif. He and his first wife, Helen, did not have children (Geisel once said that he did not particularly enjoy being around children), but his books, filled with bold colors, exotic characters and wacky story lines, made him the twentieth century’s most popular children’s author.

Geisel claimed that he rarely wrote with a particular social or political agenda in mind, and anyone familiar with the whimsical silliness of his works would agree. In fact, twenty-seven publishers rejected his first book, And To Think That I Saw It On Mulberry Street, because it didn’t contain a moral message.

But even as he tried to avoid writing morality tales, much of Geisel’s work reflected his commitment to human values. During World War II, well before Dr. Seuss became a national icon, Geisel was producing editorial cartoons for the pages of the New York tabloid PM that criticized American isolationism as well as racial discrimination in the hiring of defense workers.

Until his death in 1991, Geisel wrote children’s fiction that reflected such views. For example, Yertle the Turtle, the story of a turtle name Mack who stages the overthrow of an expansionist king named Yertle, reminds us of similar revolutions in the past that have toppled tyranny. Oh, the Places You’ll Go! reads like a sermon on self-improvement and mobility — two defining characteristics of modern life. He provides a lesson against racial discrimination in The Sneetches, while The Cat in the Hat, the book that won Geisel international fame, challenges the conformist tendencies of middle-class suburbia.

Seuss was also willing to be more straightforward in his social commentary. The Butter Battle Book is a stinging criticism of the nuclear arms race, and The Lorax alerts us to the environmental consequences of capitalism.

Like many of the rest of us today, Geisel struggled to balance a common sense faith in personal rights with a commitment to the public good. He seemed to realize that individualism, while essential to any democratic society, was often not sufficient to sustain the kind of community needed for a republic to survive.

The ever-popular How the Grinch Stole Christmas tells the story of the sinister creature who believes he can steal happiness from the Whos down in Whoville by depriving them of their Christmas presents. While the Whos certainly have a right as citizens and individuals to fulfill their holiday wants and desires with consumer products, in the end they teach the Grinch (and us) that true happiness comes from being part of something larger than one’s self.

And who can forget the adventures of Horton, the kindly elephant who counters the greed, selfishness and laziness of the world around him by displaying trustworthiness, loyalty and patience amid difficult trials? Even as Horton persistently informs us in Horton Hears a Who that “a person’s a person no matter how small,” he also reminds us that the individual rights of personhood are often secured by the sacrifice of others.

A belief in personal self-betterment, as celebrated in Oh, the Places You’ll Go!, can easily degenerate into crass self-indulgence. Such is the case with the Once-ler, the greedy capitalist of The Lorax who, in his quest to leave home for better pastures, ends up destroying the environment through his pursuit of industrial wealth. Similarly, when we’re “off to great places . . . off and away . . .” we’re often going there at the expense of the local communities we leave behind. When self-improvement and pursuits of happiness are defined entirely by social and geographic mobility, Dr. Seuss reminds us, we can never truly care for natural and human places, as the Lorax or the Whos challenge us to do.

It’s precisely because of these long-standing tensions between individualism and community that the writings of Theodor Geisel have had enduring appeal. For more than sixty years children and their parents have been reminded what it means to be a good person, citizen and friend. Dr. Seuss remains a window into the deepest convictions and paradoxes of human life. We can only hope that his books will continue to help children of all ages make sense of themselves and their obligations to society.

A few thoughts on this controversy.

First, these books do include racial stereotypes. I don’t see much of a debate here. After I wrote the above op-ed piece, immigration historian Roger Daniels responded with this:

Readers of John Fea’s piece on Theodore Geisel, aka Dr. Seuss should know that he has given a somewhat sanitized version of Geisel’s WW II career. Like most American wartime cartoonists, in what John Dower has correctly called “war without mercy,” Geisel’s treatment of our Pacific foes was utterly racist. The worst single example was published on February 13, 1942, just six days before FDR signed Executive Order 9066 which was the authority for sending Japanese Americans into concentration camps, was a particularly vicious editorial cartoon for the left-wing New York City newspaper PM showing an endless stream of identical, grinning Japanese men coming from the Pacific Northwest to a building on the California coast labeled “Honorable 5th Column” to receive packages marked “TNT” while atop the headquarters another of what we would now call the clones looks out to sea through a telescope. The cartoon is captioned “Waiting for the Signal From Home ….” Popular culture had so infused the complex image of the “Jap” into the American mind that no further explication was necessary. Geisel was later commissioned as a captain in the Signal Corps and sent to Hollywood to help the film director Frank Capra make propaganda films and cartoons to indoctrinate American servicemen and women. He emerged from his “battles” as a Lt. Col. and got a Legion of Merit.

Second, I don’t think it is a good idea to read these specific books to children. But should they be taken out of print? I don’t have a strong feeling here one way or another. If scholars or older readers want to read them, there are plenty of copies of these books in circulation. And there are still a lot of really good Dr. Seuss books that remain in print. I look forward to reading Dr. Seuss to my grandchildren one day.

Third, conservatives who think Dr. Seuss is being “canceled” need to calm down. The guardians of Seuss’s legacy made the decision to stop publishing these books. Theodore Giesel’s wife Audrey founded Seuss Enterprises. She died in 2018 at the age of 97. I am guessing there are people at Seuss Enterprises who knew her wishes.

I wonder if the folks at Fox News, or conservatives such as Ted Cruz, Tom Cotton, and Jim Jordan (see below), know that Geisel spent most of his career opposing America First-style isolationism, racism, nuclear proliferation, environmental degradation, and the exploitation of workers. He was certainly a man of the Left.

Fourth, McElligott’s Pool (which I did not write about in the above piece) is one of my favorite Seuss books. I use it all the time to teach the early 19th-century Whig Party’s assault on parochialism. The farmer represents Jeffersonian agrarianism. The boy represents a future filled with possibilities. The boy’s description of underground waterways reflect nationalist and cosmopolitan dreams facilitated through the construction roads, bridges, canals, etc. The boy imagines connectedness. The farmer knows only one piece of land. By the end of the book it is the farmer, not the boy, who looks like the “fool.” As I noted in the piece above, Seuss does something similar in Oh the Places You’ll Go.