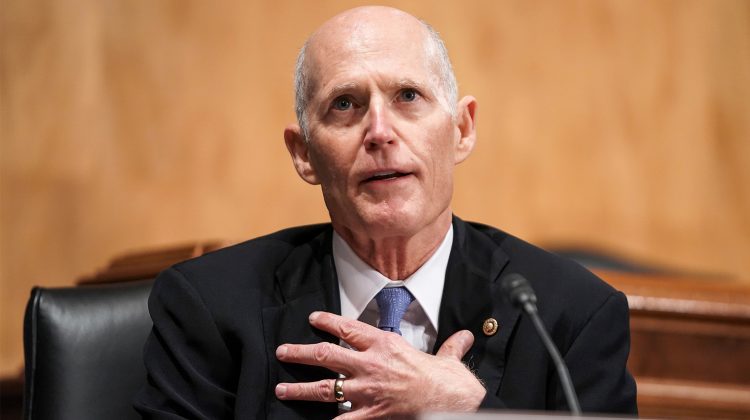 The Florida senator who serves as the chairman of the National Republican Senate Committee just announced that “The Republican Civil War is now cancelled.” Wishful thinking indeed.

Fox News published the letter. Here it is:

The long running impeachment is now over. The political theater should have been held at the other end of Washington in the Kennedy Center instead of the US Capitol. It was an unserious circus. It’s over. Now it’s time to look ahead.

First, let’s evaluate our situation: The Democrats control the White House, the Senate, and the House of Representatives. In other words, they control Washington.

Here is what they have done and are in the process of doing so far: cutting border security, granting amnesty to illegals, cancelling the Keystone pipeline destroying thousands of jobs, allowing males to compete in women’s sports, banning fracking on federal lands making us less energy independent and using tax dollars to pay for abortion in foreign countries. And they have built an amazing military-style wall around the US Capitol, at the same time they are stopping construction on the wall at our border.

Oh, and they also want to cancel us, not simply from social media, but they also want to get you fired from your job, get your bank to drop you, make you unemployable in the future, re-educate you, and completely silence anyone who disagrees with their new woke version of socialism in America.

And yet, at the very same time these far-left radicals are trying to remake America in their image, and lead us into disastrous, dystopian, socialist future, we have a parade of pundits and even Republican voices suggesting we should have a GOP civil war.

This does not need to be be true, should not be true, and will not be true Those fanning these flames, in both the media and our own ranks, desire a GOP civil war.

No, we don’t have time for that: The hour is late, the Democrats are planning to destroy our freedoms, and the threat in front of us is very real.

Perhaps in more genteel times, a bunch of infighting and arguing wouldn’t do much damage. Truthfully, I enjoy bantering back and forth, and I have no interest in trying to quell intraparty policy dialogue and debates.

But now is not the time for division and here’s why: For the first time in any of our lives, socialism has become the unabashed, governing policy of the Democrat Party. The Democrats are fast abandoning any pretense of allegiance to the first and second amendments to our Constitution, they’ll give up on the rest of it in due time.

This is real folks. If they can cancel the President of the United States, they will have no problem cancelling you and me. Today’s Democrats do not want to simply “cancel” us, they want to destroy anyone who disagrees with them.

Meanwhile, President Biden will continue to dutifully smile and read teleprompter lines about unity while his radical Administration destroys everyone who disagrees or disobeys.

To beat this threat–the threat of socialism, crushing debt, loss of freedom–we must focus on addition, not subtractions; on looking forward, not backward.

Hopefully, at some point in the future, we will have beaten this threat back and find ourselves strong enough to afford self-indulgent divisions. But that day is not today.

Today, we must show our Democrat adversaries that, as Mark Twain would say, reports of the death of the Republican coalition and the American Dream are wildly exaggerated. The truth is the exact opposite. The table is set for us.

President Trump brought many working-class voters our way, and Hispanic voters are increasingly inclined to vote Republicans. Meanwhile, the Democrats have become the party of the elites, the naive, and the socialist left, giving us tremendous opportunity to recapture our historic strength in America’s suburbs.

Yes, we are up against powerful elite headquartered in Washington and on the coasts, and they endlessly try to lecture, bully, and intimidate us. But we can beat them.

Some of you voted for President Trump enthusiastically, some with reservations, and some with great reluctance. It doesn’t matter. We got 74 million votes, and we can easily add to our numbers if we work together.

Looking backward won’t help us win. Let us look forward and fix our eyes on what is important–an America with plenty of good-paying jobs, an America with great schools and safe communities, an America with freedoms and liberties people around the world would die for. The only way we can lose is if we stop ourselves by needlessly fracturing. Again, now is not the time. Save it for another day.

You and I are being called upon to rescue our nation from a socialist experiment that alw ays has a tragic finale, an ending that involves loss–loss of prosperity, loss of freedom and loss of life. Let’s work together, let’s focus forward, and let’s get to work to create the America our families want and deserve.

This is a fascinating document. Socialism is mentioned seven times. I don’t know if this is meant to be a fundraising letter, but it stokes the kind of fear-mongering that is a staple of these kinds of missives.

This call for unity reminds me of those who sought national unity after the Civil War without making any effort to deal with the white supremacy that led to the Civil War in the first place.

The section on the 2016 and 2020 election is revealing. Scott says that some Republicans “voted for President Trump enthusiastically, some with reservations, and some with great reluctance. It doesn’t matter.” Notice that Scott does not mention GOP senators and others who did not vote for Donald Trump. He does not mention those senators who voted to impeach him. Apparently Sasse, Toomey, Collins, Murkowski, Burr, Cassidy, and Romney are not part of Rick Scott’s unity movement. Scott calls the GOP to move beyond the Trump era even as he and others will speak at this weekend’s MAGA-fest in Orlando, otherwise known as CPAC. Scott wants the GOP to unite around Trumpism.

This document makes absolutely no effort to find common ground across party lines. For Scott, it’s party first, America second. The letter implies that there is nothing–absolutely nothing–for which the GOP can find unity with those across the aisle.

Meanwhile, Wyoming congresswoman Liz Cheney refuses to back-off her belief that Trump was responsible for inciting the white supremacists who stormed the U.S. Capitol on January 6, 2021. Adam Kinzinger is forming a movement to bring integrity, truth, and conservative ideals back to the GOP. An influential Arkansas state senator has left the party. And Republicans are leaving the party in significant numbers.