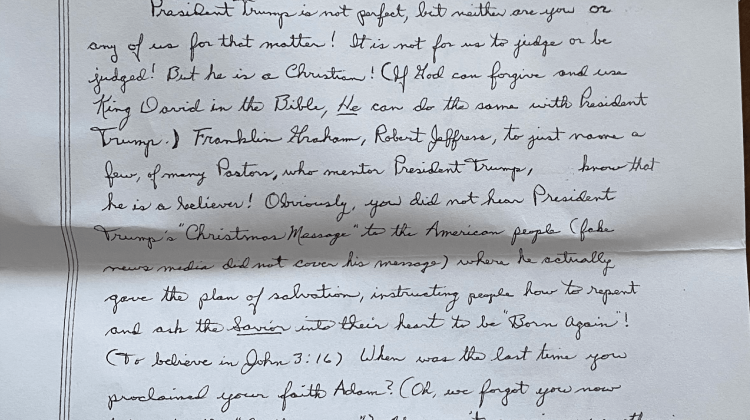 Rep. Adam Kinzinger (R-IL) is one of the few Republicans who voted to impeach Donald Trump. In a piece titled “Adam Kinzinger’s Lonely Mission,” The New York Times tells his story. The subtitle reads: “Censured by his party and shunned by family members, Mr. Kinzinger, a six-term Illinois congressman, is pressing Republicans to leave Donald Trump behind–and risking his career doing so.”

As part of its piece, the Times has published a letter Kinzinger received from members of his extended family. Page one is published at the top of this post. Here is a transcript:

Oh my, what a disappointment you are to us and to God! We were once so proud of your accomplishments! Instead, you go against your Christian principals (sic) and join the “devil’s army.” (Democrats and the fake news media). How do you call yourself a Christian when you join the “devils army believing in abortion! We thought you were “smart” enough to see how the left is brainwashing so many “so called good people” including yourself and many other GOP members. You have even fallen for their socialism ideals! So, so, sad!

President Trump is not perfect, but neither are you or any of us for that matter! It is not for us to judge or be judged! But he is a Christian! (If God can forgive and use King David in the Bible, He can do the same with President Trump.) Franklin Graham, Robert Jeffress, to just name a few, of many Pastors, who mentor President Trump, know that he is a believer! Obviously, you did not hear President Trump’s “Christmas Message” to the American people (fake news media did not cover his message) where he actually gave the plan of salvation, instructing people how to repent and ask the Savior into their heart to be “Born Again”! (To believe in John 3:16). When was the last time you proclaimed your faith Adam? (Oh, we forgot you now belong to the “devils army.”). You won’t convince us otherwise with your horrible, rude accusations of President Trump! (To embrace a party that believes in abortion and socialism is the ultimate sin.) We should list even more grievances against you, but decided you ae not worth more of our time to list them. We have said enough!

You should be very proud that you have lost the respect of Lou Dobbs, Tucker Carlson, Sean Hannity, Laura Ingraham, Greg Kelly, etc. and most importantly in our book, Mark Levin and Rush Limbaugh and us!

It is now most embarrassing to us that we are related to you. You have embarrassed the Kinzinger family name. We are not judging you. This letter is our opinion of you !

Oh, by the way, good luck in your fund raising endeavors. We are sure we know there are many others good GOP and Christian supporters, that feel the same way we do. Also very disappointed with the many other GOP have sided with the Democrats. (We should demand our money back!)

The following Kinzinger family members have asked that their names be added to this letter:

P.S. For your information, many more family members, feel the same as we do. They just didn’t have the courage to sign our letter or write their own letter! Not us, we are throughly (sic) disgusted with you!! And, oh by the way, we are calling for your removal from office! I have received numerous calls concerning your actions and egregious behavior towards our President of the United States, Donald J. Trump!

*President Trump has done more for the American people in four years, than you, the Rino’s, and Democrates (sic) have done in years!!

I have a lot of Trump supporters in my extended family, but fortunately I have never received a letter of this kind. (Although I am sure these sentiments have been expressed in private conversations). I have, however, received these kinds of letters and e-mails (about one or two a week since Believe Me was published) from others, including several members of my church. There is nothing in this Kinzinger family letter to Adam Kinzinger that I have not heard before, including the references to Franklin Graham, Robert Jeffress, the Fox News crowd, socialism, abortion, and Trump’s newfound evangelical faith.” The line about Trump not being “perfect” is boilerplate. This letter should be put on display in a museum as representative of evangelical Trumpism.

I appreciate conservative evangelicals like Kinzinger and Jamie Herrera Beutler who have shown true courage during the Trump impeachment trial.

Here is a taste of The New York Times piece:

Raised in a large central Illinois family — his father, who has 32 first cousins, ran food banks and shelters for the homeless in Peoria and Bloomington — Mr. Kinzinger was interested in politics from an early age. Before he’d turned 10 he predicted he would one day be governor or president, Ms. Otto said, and he won election to the McLean County Board when he was a 20-year-old sophomore at Illinois State University.

He joined the Air Force after the Sept. 11 attacks and served in Iraq and Afghanistan. Upon his discharge he joined the Air National Guard, where he remains a lieutenant colonel. In the 2010 Republican wave Mr. Kinzinger, then 32, beat a Democratic incumbent by nearly 15 percentage points and, two years later, with support from Eric Cantor, then the House majority leader, ousted another incumbent, 10-term Republican Don Manzullo, in a primary following redistricting.

But Mr. Kinzinger soon became dispirited by a Republican Party he believed was centered around opposition to whatever President Barack Obama proposed without offering new ideas of its own.

“His frustration level has been rising ever since he got to Congress and I think the Trump era has been difficult for him to make sense of and participate in,” said former Representative Kevin Yoder of Kansas, who was one of Mr. Kinzinger’s closest friends in Congress before losing a 2018 re-election bid. When loyalty to Mr. Trump became a litmus test for Republican conservatism, Mr. Yoder said, “that became a bridge too far for him.”