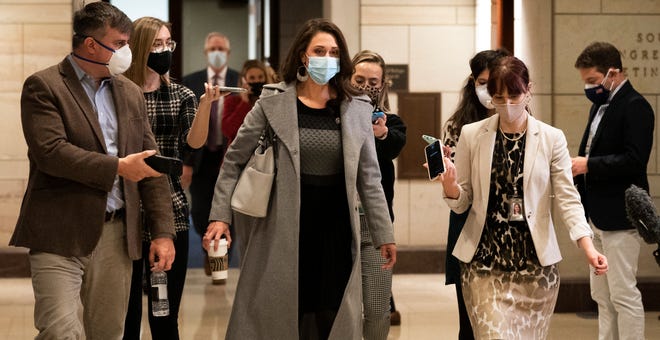 Yesterday we did a post on Jamie Herrera Beutler, the Washington congresswoman who was prepared to testify that House Republican leader Kevin McCarthy told her that Trump supported the insurrection of the U.S. Capitol on January 6, 2021. Herrera did not testify, but a statement by her was read into the trial record so the Senate jurors could consider her testimony in their deliberations.

We also noted that Beutler is an evangelical Christian–a member of City Harvest Church in Vancouver, Washington and a former student at Seattle Pacific University.

Beutler is one of the heroes of the second Trump impeachment trial, but not everyone in her district agrees with me. Today on her Facebook page, Beutler wished her constituents a Happy Valentines Day. Here are a few of the responses she received:

We will see what happens in 2022. I imagine Trump will seek vengeance against Beutler by supporting a primary challenger.

I live in the WA-3rd and watch politics here closely.  Jaime Herrera Beutler knows exactly what she is doing, and she is doing exactly what she needs to do in order to survive in this district.  Of course you can find local rabid Republicans who are enraged at her. But that isn’t the whole story by a longshot.

First, WA, like CA, does not have partisan primaries.  We have a so-called “jungle primary” in which the top two from all parties advance to the general election. This essentially makes Herrera Beutler immune to a primary challenge from the MAGA right. WA is also a 100% mail-in voting state. In June 2022 the state will send out primary ballots to every registered voter in the district.  That primary ballot will have perhaps 10 candidates including Herrera Beutler, some prominent Dem that has rounded up the usual endorsements, and then an assortment of riffraff from Greens to Libertarians to right wing MAGA fringe candidates. It is inconceivable that Herrera Beutler will place 3rd or worse.  She has huge name recognition here and is always attaching her name to popular initiatives and then putting out press releases that the local media dutifully publishes. “Herrera-Beutler co-sponsors bill to expand child tax credit”  that sort of thing.  She will clean up among the vast suburban PTA mom independent voters who already liked her and like her more now. The 20% of rabid MAGA voters around here have zero chance of primarying her because it isn’t a closed GOP primary.  In fact they are so disorganized and idiotic that they won’t be able to coalesce around a single primary challenger anyway. There will probably be 3 or 4 of them all on the same primary ballot.

Second, Clark County (Vancouver) is one of the fastest growing urban areas of the state. This is essentially suburban Portland.  In the next redistricting coming soon, WA-3rd is likely to shrink geographically and become more of a suburban Portland district rather than a giant sprawling semi-rural SW Washington district that it is now. Especially if WA gets another congressional seat.  Which means if Herrera Beutler wants to survive in this district she needs to adapt to a purple district that will continue to trend further blue every year.