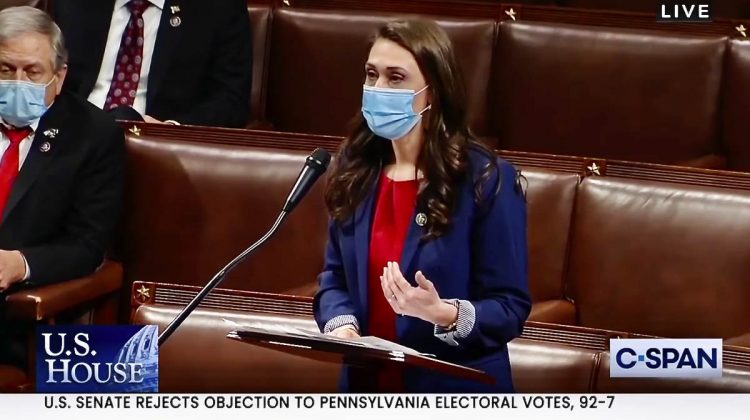 Beutler represents Washington’s 3rd district in the House of Representatives. She has served this district for six terms. Most of the citizens in her district live in the Washington side of the Portland metropolitan area. She was one of ten Republicans in the House who voted to impeach Donald Trump.

Several hours ago the Senate voted to hear witnesses in the Donald Trump impeachment trial. Beutler will be the first witness. She is ready to testify that House Republican leader Kevin McCarthy told her that Trump supported the insurrection of the U.S. Capitol on January 6, 2021. We reported on this last night.

In a statement on Friday night, Representative Jaime Herrera Beutler, Republican of Washington, recounted a phone call relayed to her by Mr. McCarthy of California, the minority leader, in which Mr. Trump was said to have sided with the rioters, telling the top House Republican that members of the mob who had stormed the Capitol were “more upset about the election than you are.”

She pleaded with witnesses to step forward and share what they knew about Mr. Trump’s actions and statements as the attack was underway.

“To the patriots who were standing next to the former president as these conversations were happening, or even to the former vice president: if you have something to add here, now would be the time,” Ms. Herrera Beutler said in the statement.

Her account of the call between Mr. McCarthy and Mr. Trump, first reported by CNN, addressed a crucial question in the impeachment trial: what Mr. Trump was doing and saying privately while the Capitol was being overrun.

Ms. Herrera Beutler said that Mr. McCarthy had relayed details of his phone call with Mr. Trump to her. She has been speaking publicly about it for weeks, including during a virtual town hall on Monday with constituents, and she recounted their conversation again in the statement on Friday.…

By Ms. Herrera Beutler’s account, Mr. McCarthy called Mr. Trump frantically on Jan. 6 as the Capitol was being besieged by thousands of pro-Trump supporters trying to stop Congress from counting Electoral College votes that would confirm his loss.

She said Mr. McCarthy asked him “to publicly and forcefully call off the riot.”

Mr. Trump replied by saying that antifa, not his supporters, was responsible. When Mr. McCarthy said that was not true, the former president was curt.

“Well, Kevin, I guess these people are more upset about the election than you are,” he said, according Ms. Herrera Beutler’s account of what Mr. McCarthy told her.

Read the entire piece here. It is clear that other members of the GOP know about this Trump-McCarthy phone call. Only Beutler has the courage to testify.

Beutler is an evangelical Christian. A 2017 story in a local Oregon news source describes the Beutler family as “devout Christians who attend City Harvest Church in Vancouver.” In March 2017, Beutler’s pastor, Bob MacGregor, offered the opening prayer in the House of Representatives. Beutler introduced her:

Ms. HERRERA BEUTLER. Mr. Speaker, it is my great honor to introduce my pastor and dear friend, Bob MacGregor, as our guest chaplain this morning.

Pastor Bob is the lead pastor of City Harvest Church in Vancouver, Washington, my home church. City Harvest is a thriving church that greatly impacts our community by caring for the needy and supporting mission work.

Pastor Bob and his wife, Sue, have four daughters and eight grandchildren. They have been married for 38 years and share a burden to help build marriages and families of ministers who face the demands of ministry life.

It is my great pleasure to welcome Pastor Bob and thank him as he has blessed us this morning with his prayer.

Beutler attended evangelical Seattle Pacific University from 1996-1998 and completed her studies at Bellevue Community College and the University of Washington.

Beutler voted in line with Trump nearly 80% of the time. She did not vote for the former president in 2016, choosing to write in Paul Ryan. In 2020, she voted for Trump.