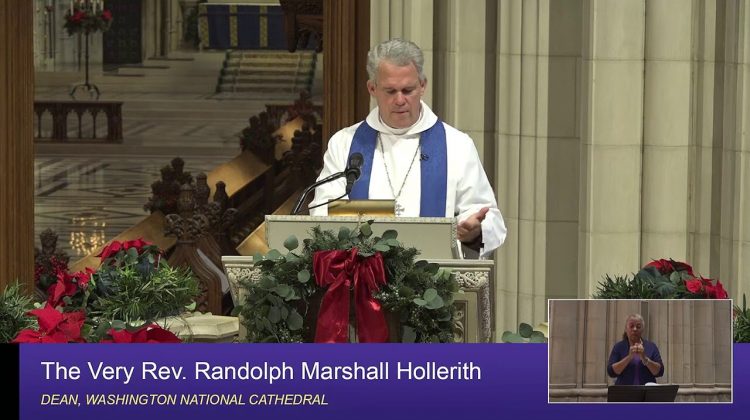 Yesterday I wrote about Dean Randolph Hollerith’s decision to invite evangelical writer and speaker Max Lucado to preach “at” the Washington National Cathedral. LGBTQ Episcopalians were not happy about the invitation because Lucado holds traditional views on marriage and said some harsh things about homosexuality in the past.

Let me share why we invited Max to preach. We have to come out of our corners, find common ground where we can, and find ways to live with and see each other as the beloved children of God that we are. We have all grown too accustomed in our silos and echo chambers. In order to start the process of rebuilding, we need to hear from each other.

That does not mean we will always agree. In fact, I don’t agree with Max’s views on LGBTQ issues. We can still hold our convictions and cling to our values in the midst of disagreement. But the work that we cannot ignore is the vitally important task of what Isaiah called “repairing the breach.” That starts, first and foremost, with those with whom we disagree. When we only engage with those with whom we agree on every issue, we find ourselves in a dangerous (and lonely) place. My hope is that all churches and faith communities will find ways to open their doors to perspectives different from their own.

This Cathedral is a house of prayer for all people, proudly so. That means this Cathedral, and this pulpit, are big enough and strong enough to welcome pastors, rabbis, imams, clergy of every faith. It does not mean we agree with everything they might believe, but it does mean that we exhibit and inhabit a sense of open handed welcome.

But today I learned that he changed his mind. Here is his February 10, 2021 letter to his congregation:

In my 31 years of ordained ministry, I have had the honor of walking with people through the range of human emotions: joy at the birth of a child, the excitement of a new marriage, the painful sting of death, the tragedy of a failed relationship.

As a priest, it is easy to sojourn with people through the good times. The painful times — those are much harder. They are harder still when, however well-intentioned, you have done something to contribute to that pain.

This past Sunday, I invited the Rev. Max Lucado to preach at Washington National Cathedral. He and I disagree on many things, but I invited him because I believed him to be a man of deep faith. Moreover, I hoped his presence would be a step toward building new bridges to the evangelical community. What I did not know was that he also had written and said some horrific things about LGBTQ people. However, that is no excuse.

Later, when people pointed out those writings to me, when they tried to tell me they were hurting because of this invitation, I didn’t listen. In my straight privilege I failed to see and fully understand the pain he has caused. I failed to appreciate the depth of injury his words have had on many in the LGBTQ community. I failed to see the pain I was continuing. I was wrong and I am sorry.

In my attempt to build new relationships with others, I didn’t see how my actions were damaging already cherished relationships with those who have been hurt by words and teachings of religious leaders like Reverend Lucado. And for that I apologize.

Was it a mistake to invite Max Lucado to preach at the Cathedral? Seeing all too clearly now the pain that it caused and the trauma it resurrected for so many, I know that  it was. I made a mistake and I am sorry.

In my first sermon at the Cathedral in 2016, I preached on Isaiah’s call to be repairers of the breach. That mandate has been the guiding principle of my tenure as dean and remains so.

I am committed to that work, but I regret the pain, hurt and disappointment I have caused during this misguided attempt to do that work. It is important that  we seek reconciliation and relationship with those with whom we disagree, but not at the expense of the sacred dignity and worth of our LGBTQ friends and families.

Bishop Budde and I have heard from so many people who were hurt by our decisions; we are still listening. We invite you to join us for an online public discussion on Sunday Feb. 21 at 7 pm ET as we seek to move together to become the people God calls us to be. I hope to see you there.

Max Lucado has responded with humility and contrition. Yesterday he sent this letter to the Washington National Cathedral:

It was a high honor to serve as your guest preacher on February 7, 2021. It has come to my understanding that my presence in the Cathedral is a cause of consternation for many of your members.

I was invited to Washington National Cathedral to preach on the topic of the Holy Spirit. My desire was to highlight the power of the Spirit to bring comfort in these chaotic times. However, instead of that sermon, many only heard my words from many years ago.

In 2004 I preached a sermon on the topic of same-sex marriage. I now see that, in that sermon, I was disrespectful. I was hurtful. I wounded people in ways that were devastating. I should have done better. It grieves me that my words have hurt or been used to hurt the LGBTQ community. I apologize to you and I ask forgiveness of Christ.

Faithful people may disagree about what the Bible says about homosexuality, but we agree that God’s holy Word must never be used as a weapon to wound others. To be clear, I believe in the traditional biblical understanding of marriage, but I also believe in a God of unbounded grace and love. LGBTQ individuals and LGBTQ families must be respected and treated with love. They are beloved children of God because, they are made in the image and likeness of God.

I share the Cathedral’s commitment to building bridges and learning how to listen — to really listen — to those with whom we disagree. That work is difficult, it is hard, it is messy, and it can be uncomfortable. But we need it now more than ever.

I understand both sides of this issue. I am sympathetic to Hollerith’s letter and I appreciate Lucado’s apology.

I am now left with questions: Does this controversy mean that the Washington Cathedral will no longer invite preachers who believe in traditional marriage? Or was this just a matter of Lucado’s derogatory comments from 2004? In other words, have sexual ethics become a litmus test for guest preachers at the Washington National Cathedral? Or does Lucado’s apology means that he might be invited back?

And what about memorial services for American leaders and other dignitaries? Twenty years ago George W. Bush gave a speech in the Cathedral three days after September 11, 2001. Bush holds traditional views on marriage and homosexuality. Would another president who holds such views be permitted to speak?

In February 2019 Washington Post columnist Michael Gerson preached at the National Cathedral. I think Gerson still identifies as an evangelical Christian, but I don’t know the Wheaton College graduate and former Bush speechwriter’s position on gay marriage. But what if he does believe in traditional marriage? Will the Cathedral invite him back to preach?

What about pro-life evangelical Richard Cizik, former VP at the National Association of Evangelicals? I don’t know Cizik’s current position on gay marriage, but in 2008 he said that he did not “officially support redefining marriage from its traditional definition.” Cizik preached at the National Cathedral in April 2016.

Again, I support the Cathedral’s decision to uphold any litmus test they think is appropriate. I am just curious about how they understand that litmus test.