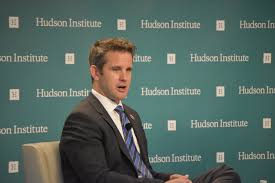 Kinzinger represents Illinois’s 16th district in Congress. As I have noted before at this blog, he is one of the few evangelical Christians to vote to impeach Donald Trump. Last week Christianity Today even did a story on him.

Today Kinzinger announced an anti-Trumpism political action committee called “Country First.” The video on this website suggests that Kinzinger has some political ambitions. Unlike most of his GOP colleagues in the House and Senate, he is going to stake his political future on opposing Trumpism. We will see how that goes.

In Oliver Knox’s piece at The Washington Post, we learn that Kinzinger’s views on Donald Trump and Trumpism has resulted in attacks from his own family:

My dad, he has some cousins that all signed a letter, hand-written, out of pure anger, kinda funny to read. I’m ‘in the Devil’s army,’ I’m ‘coopted,’ I’m ‘not doing the work of the Lord,’ and disowning me, and sent it certified,” he said. They sent a second one, in the same tone, days later.

I think a lot of us can relate to this.