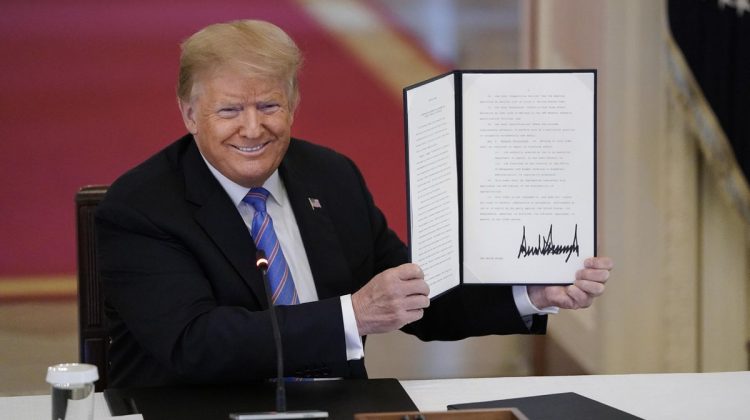 Read the entire series here. As I type, I am learning that Joe Biden will rescind the 1776 commission today. But I will go ahead with my analysis since I imagine that states with conservative governors or legislators may try to adopt this report as part of their social studies curriculums.

Today we move to Part 2 of Donald Trump’s 1776 Commission Report: “The Meaning of the Declaration.”

The first paragraph reads: “The United States is in most respects a nation like any other.” I think this is true in a number of ways. I affirmed this belief, with several important limitations, in the foreword to John Wilsey’s American Exceptionalism and Civil Religion. But the writing and signing of the Declaration of Independence did not make the the United States exceptional.

Then comes this line: “And, although a relatively young country, its people have shared a common struggle and achievement, from carving communities out of a vast, untamed wilderness, to winning independence and forming a new government, through wars, industrialization, waves of immigration, technological progress, and political change.”

I could say several things about the Whiggish nature of this sentence, but let me call your attention to the reference to the “untamed wilderness.” The assumption here is that Native Americans did not exist or that they were frontier savages who needed to be civilized by Western values. It ignores decades of scholarship in Native American history that treats Indians as human beings with dignity who often resisted white men and women “carving” out communities on their land. This statement in the report also reflects the spirit of Frederick Jackson Turner’s frontier thesis, a view of the West that celebrates rugged white individualism and triumph. Historians of the West and Native American history debunked the Turner thesis decades ago.

And speaking of “republicanism,” this is a political theory closely connected to the eighteenth-century understand of virtue. Republics survive when citizens act virtuously, or will sacrifice their interests for the greater good of the community. Such a reference is ironic coming from a commission appointed by one of the most narcissistic, self-interested presidents in American history. As I type, my mind turns to COVID-19 and all the so-called “patriots” who refused to wear masks to protect their neighbors because they believed mask-wearing undermines their God-given rights. If you are looking for the founding rhetoric of “republicanism” look no further than some of Barack Obama’s speeches.

And now onto the limits of American exceptionalism. This report fails to recognize the deeply British roots of the American Revolution. It assumes that the values in the Declaration of Independence, and the ideals for which the Revolution was fought, was somehow uniquely American. In fact, if the colonies were not so deeply embedded in British ideals about liberty there would be no revolution. There is nothing new about the ideas of the Declaration of Independence. They are merely a reflection of what all British people had believed about liberty since the Glorious Revolution of 1688 or perhaps as far back as the Magna Carta. The report ignores this long history of British liberty, preferring instead to focus on the “divine right of Kings.”

It is worth noting again that none of the authors of this report are American historians. The report reads like it was written by conservative political theorists. It assumes that the Declaration of Independence was written to set forth ideals that would govern the country. Historian David Armitage has argued convincingly that the Declaration was written primarily as a document asserting American political sovereignty in the hopes that the newly created United States would secure a place in the international community of nations. In fact, Armitage asserts, the Declaration was discussed abroad more than it was at home. This meant that the Declaration was “decidedly un-revolutionary. It would affirm the maxims of European statecraft, not affront them.” To put this differently, the “self-evident truths” and “unalienable rights” of the Declaration’s second paragraph would not have been particularly new or groundbreaking in the context of the eighteenth-century British world. These were ideals that all members of the British Empire valued regardless of whether they supported or opposed the American Revolution. The writers of the Declaration of Independence and the members of the Second Continental Congress who endorsed and signed it did not believe that they were advancing, as historian Pauline Maier has put it, “a classic statement of American political principles.” This was a foreign policy document.

The writers of the Declaration viewed the document this way. In an 1825 letter to fellow Virginia Henry Lee, Thomas Jefferson explained his motivation behind writing it:

…when forced, therefore, to resort to arms for redress, an appeal to the tribunal of the world was deemed proper for our jurisdiction. This was the object of the Declaration of Independence. Not to find out new principles or new arguments, never before thought of. . . but to place before mankind the common sense of the subject, in terms so plain and firm as to command their assent, and to justify ourselves in the independent stand we are compelled to take.

John Adams, writing five years after he signed it, called the Declaration “that memorable Act by which [the United States] assumed an equal Station among the nations.” Adams’s son, John Quincy, though not a participant in the Continental Congress, described the Declaration as “merely an occasional state paper. It was a solemn exposition to the world, of the causes which had compelled the people of a small portion of the British empire, to cast off their allegiance and renounce the protection of the British king: and to dissolve their social connection with the British people.” There is little in these statements to suggest that the Declaration of Independence was anything other than an announcement to the world that the former British colonies were now free and independent states and thus deserved a place in the international order of nations.

If anyone took the Declaration seriously as a model for government, it was the thirteen new states who saw the document’s claims to equality as a model for creating very democratic governments. Some of these state democratic governments, such as the one drafted for the new state of Pennsylvania, were so serious about equality and God-given rights that they allowed free Blacks and non-landholders to vote. Many of the future framers of the Constitution were so worried about these democratic governments, and were so convinced that the people could not govern themselves without checks from wealthy and educated from men, that they decided to frame the U.S. Constitution in 1787 as a way of curbing such populist democracy.

If the original intent of the writers of the Declaration of Independence was to affirm American statehood to the world, then at what point did this revered document become, in the minds of Americans, a statement of individual or human rights, as the authors of 1776 Commission describe it? Indeed, as Abraham Lincoln put it, “The assertion that ‘all men are created equal’ was of no practical use in effecting our separation from Great Britain; and it was placed in the Declaration, not for that, but for our future use.” Lincoln was a revisionist. He found the Declaration useful for reasons that were not primarily intended by its writers. Americans like Lincoln took a document that was originally addressed to the world as a “declaration of independence” and turned it into a document that would come to represent American ideals and values related to individual rights. Armitage writes:

this effort of domestication would have two equal and opposite effects: first, it would hide from Americans the original meaning of the Declaration as an international, and even a global document; second, it would ensure that within the United States only proponents of slavery, supporters of Southern secession, and anti-individualist critics of rights talk would be able to recall that original meaning.

In the hands of abolitionists, women’s suffragists, and especially Lincoln, the Declaration became “American Scripture.” The abolitionist William Lloyd Garrison appealed to the Declaration’s assertion that “all men are created equal” in his defense of the immediate emancipation of slaves. The Seneca Falls convention of 1848 used it to proclaim the rights of women. And Lincoln, in the opening lines of the Gettysburg Address (“four score and seven years ago”) made a direct connection between the Union cause in the Civil War and the Declaration of Independence. These American reformers were in search of a usable past–an interpretation of the American founding that they could employ to promote human rights and equality in their nineteenth-century settings. The original intent of the Declaration was not as useful as the famed second paragraph asserting the “self-evident” truth that people were created equal and possessed certain unalienable rights.

Note: Much of this post draws heavily from my work in Was America Founded as a Christian Nation?: A Historical Introduction.

Update (12:47pm): Someone tweeted this. It is the page where the 1776 Commission was once published.