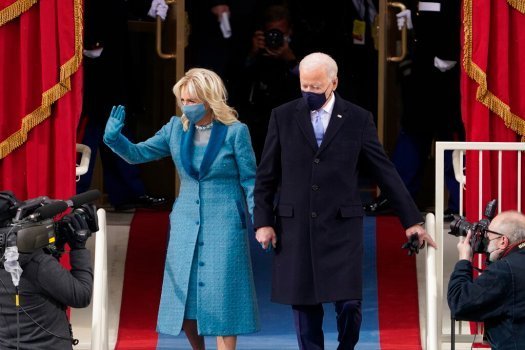 It’s official. The Trump presidency is over. The Biden presidency is here. Here are a few thoughts, with the help of my Twitter feed, on today’s inauguration ceremony:

I began the day with a reminder. It’s been a long four years chronicling Trump and the evangelical response to his presidency. Thanks for joining me on the journey:

There were some snow flurries today in Washington D.C. Perhaps Minnesota Senator Klobuchar, who was one of the major organizers of the ceremony, brought the flurries with her:

Did you notice Biden’s massive Bible?

Bernie seemed to be enjoying himself:

So was Biden’s Secretary of Treasury nominee Janet Yellen:

Lady Gaga was amazing. Since I tweeted this I have learned that the bird on her outfit was actually a dove carrying a olive branch.

My friend Scott Hancock tweeted seconds after Harris was sworn-in:

Biden was inaugurated at 11:48 AM EST. Twelve minutes too early:

What a difference four years make:

Biden comes into office after four years of lies:

Presidential historian Jon Meacham, who helped to write Biden’s speech, has been using this Augustine quote for several years:

“For his anger lasts only a moment, but his favor lasts a lifetime; weeping may stay for the night, but rejoicing comes in the morning.” This has a ring of Reagan’s “morning in America“:

Biden asked for a moment of silent prayer for COVID-19 victims:

Apparently this is not the first prayer in a presidential inaugural address.

What shall be our legacy?

What will our children say?

Let them say of me I was one who believed

In sharing the blessings

Let me know in my hear

tWhen my days are through

I gave my best to you

Hope over fear. I’ve heard that before:

A general take on Biden’s speech:

Then Missouri senator Roy Blunt came back on stage:

I finished it this afternoon. Also got in that nap:

Biden was ready to go on day 1: