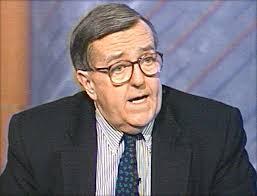 For 19 years they have talked politics on the PBS News Hour. Shields and Brooks. Brooks and Shields. They have become a Friday night fixture for political junkies. Tonight will be their last show together. Shields is stepping down from his regular post.

I don’t know if it was midcentury liberalism or the midcentury record of the Boston Red Sox, but Mark instinctively identifies with the underdog. Every year he invites me to do an event with him with Catholic social workers. These are people who serve the poor and live among the poor. They have really inexpensive clothing and really radiant faces, and in their lives you see the embodiment of an entire moral system, Catholic social teaching, which has its service arm and, in Mark, its political and journalistic arm.

He comes from a generation that highly prized egalitarian manners: I’m no better than anyone else and nobody is better than me. Like Biden, condescension is foreign to his nature. As everybody at the “NewsHour” can attest, he treats everybody with equal kindness. He also comes from a generation in which military service was widespread, along with a sense of shared sacrifice.

I look at Mark’s constellation of values and worry that they are fading away. He doesn’t buy that decline narrative: “I’m more optimistic than I have been. We have to do a little better at celebrating our successes.”

When you work with somebody this long you remember little things — the way he pops chocolates into his mouth during late-night campaign coverage — and the big emotional moments, watching, on set, the first footage of bodies floating after Katrina.

Here is a the PBS tribute: