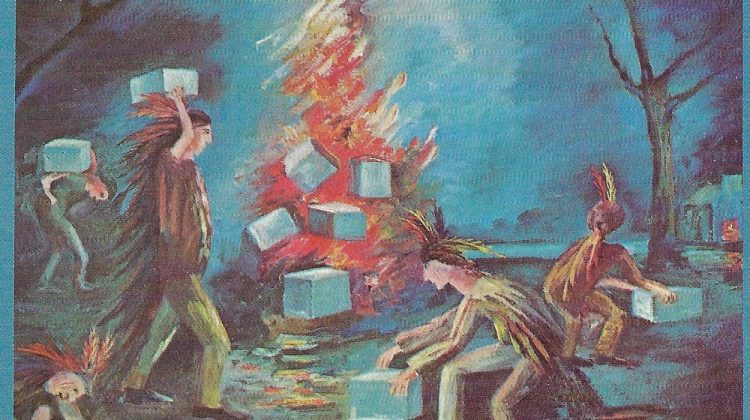 As J.L. Bell reminds us at Boston 1775, today is the 247th anniversary of the Boston Tea Party. While the Boston patriots dumped East India Company tea into the waters of Boston Harbor, not all revolutionary-era tea protestors involved dumping. Other protestors, such as the ones in Greenwich, New Jersey, burned tea.

Even after the destruction of the tea in Boston harbor was widely reported, smaller New England towns continued to follow the Lexington model—or to build the bonfire simply because it was easier. I can think of public or semi-public tea burnings at:

Provincetown in January 1774, along with men disguised as Indians in “black face.”

Three days before the Boston Tea Party, the people of Lexington burned tea on their town common. They weren’t trying to prevent the new East India Company tea from being landed; they were promoting a wider tea boycott. They also had a much smaller amount of tea and more open space than the Bostonians, so fire made more sense than tossing the tea into Vine Brook.

In Annapolis, Maryland, a ship and its cargo of tea were burned together on 19 Oct 1774, as shown above, combining fire and water. And in September 1774, people in York, Maine, disguised as Indians took away some tea but apparently returned it after that symbolic destruction was complete and it was safe to go back to drinking it.

Thus, I conclude that while tossing tea into the water became a meme in pre-Revolutionary America, people didn’t feel the need to follow that model in every detail. If a harbor was handy, they used that to destroy the tea. If they needed to hide their identities, they adopted Indian disguises—whether or not they actually destroyed tea. But if a bonfire was legally safe and easy, flames it was.