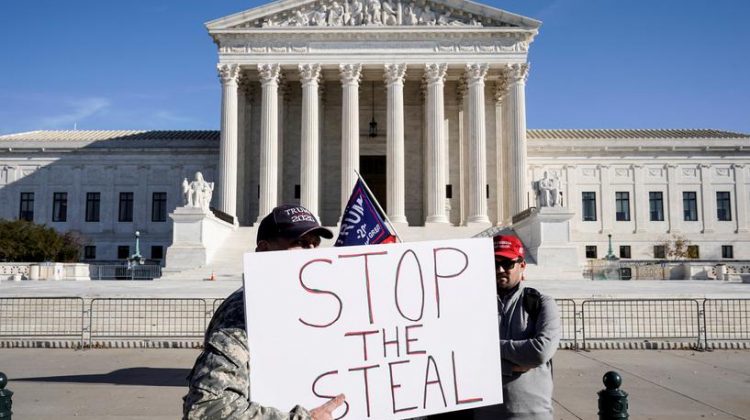 Today pro-Trump evangelicals and their friends gathered in Washington D.C for a “Jericho March” to “stop the steal” of the 2020 election. Eric Metaxas, the creator and star of the recent Joe Biden parody video in which he transposed a political message over the lyrics to a Christian song performed by acapella group Pentatonix, was the master of ceremonies for a non-stop parade of bombastic, reality-denying speakers. I did not get to watch the entire event, but I live-tweeted through most of it.

The rally got off to a “good “start when Metaxas asked if anyone in the audience had a bazooka so they could shoot down a media helicopter flying over the event.

The day ended with Metaxas blowing a red, white, and blue shofar and the “walls came tumbling down.”

Mike Flynn, the former Trump national security adviser who told special counsel Robert Mueller that he “willfully and knowingly” made “false, fictitious and fraudulent” statements to the FBI about conversation with Russia’s ambassador, was one of the day’s featured speakers:

I got a complementary copy of the Epoch Times in the mail the other day. Nearly every article was about voter fraud. This was not the first time this rag was mentioned today:

Midway through Flynn’s speech, another helicopter made several passages over the event:

Flynn had several family members on stage with him:

The election is over. Joe Biden the Electoral College will formally elect him on Monday. He will be inaugurated on January 20. Yet Trump is not going to go away. His followers, like the evangelicals who came to this Jericho March, will be the ground troops for a Trumpian lost cause. This lost cause movement was on display today:

I didn’t get this woman’s name:

I laughed out loud:

And there was more:

The organizer of the rally, Ali Alexander, looks like Sammy Davis Jr.

What would an evangelical pro-Trump rally be without the master of ceremonies illustrating a complete misunderstanding of racism:

Metaxas was introducing this guy:

Christian nationalism and Zionism was everywhere:

I took the opportunity to counter bad history with some good history:

They found a couple of Greek Orthodox pro-Trumpers:

One speaker wants to start a new political party:

Pro-life advocate Abby Johnson was way over the top:

A lot of speakers came with “prophetic words”:

And yes, there were threats of violence at this evangelical Christian event:

Lance Wallnau prepared the audience for spiritual war to win back the country.

The state of evangelical politics:

Read the attached post about Kullberg. She once thought I was the son of New Testament scholar Gordon Fee.

He was convicted of witness tampering and lying to investigators, but then he converted to evangelical Trumpism:

It was only a matter of time:

The last time we heard from this guy he had COVID-19:

He has a Ph.D in military history:

It looks like this group will be back on Inauguration Day:

The day ended with another prophetic word:

But not before Metaxas blew a red, white, and blue shofar. And the “walls came tumbling down.”