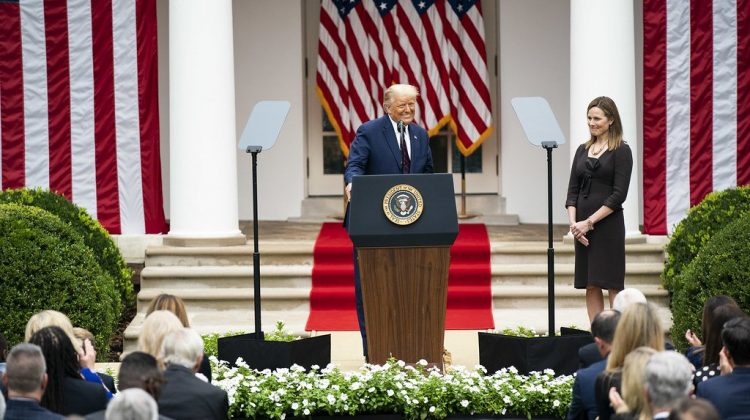 Here is “An Open Letter to Judge Amy Coney Barrett From Your Notre Dame Colleagues“:

We write to you as fellow faculty members at the University of Notre Dame.

We congratulate you on your nomination to the United States Supreme Court. An appointment to the Court is the crowning achievement of a legal career and speaks to the commitments you have made throughout your life. And while we are not pundits, from what we read your confirmation is all but assured.

That is why it is vital that you issue a public statement calling for a halt to your nomination process until after the November presidential election.

We ask that you take this unprecedented step for three reasons.

First, voting for the next president is already underway. According to the United States Election Project (https://electproject.github.io/Early-Vote-2020G/index.html), more than seven million people have already cast their ballots, and millions more are likely to vote before election day. The rushed nature of your nomination process, which you certainly recognize as an exercise in raw power politics, may effectively deprive the American people of a voice in selecting the next Supreme Court justice. You are not, of course, responsible for the anti-democratic machinations driving your nomination. Nor are you complicit in the Republican hypocrisy of fast-tracking your nomination weeks before a presidential election when many of the same senators refused to grant Merrick Garland so much as a hearing a full year before the last election. However, you can refuse to be party to such maneuvers. We ask that you honor the democratic process and insist the hearings be put on hold until after the voters have made their choice. Following the election, your nomination would proceed, or not, in accordance with the wishes of the winning candidate.

Next, the late Justice Ruth Bader Ginsburg’s dying wish was that her seat on the court remain open until a new president was installed. At your nomination ceremony at the White House, you praised Justice Ginsburg as “a woman of enormous talent and consequence, whose life of public service serves as an example to us all.” Your nomination just days after Ginsburg’s death was unseemly and a repudiation of her legacy. Given your admiration for Justice Ginsburg, we ask that you repair the injury to her memory by calling for a pause in the nomination until the next president is seated.

Finally, your nomination comes at a treacherous moment in the United States. Our politics are consumed by polarization, mistrust, and fevered conspiracy theories. Our country is shaken by pandemic and economic suffering. There is violence in the streets of American cities. The politics of your nomination, as you surely understand, will further inflame our civic wounds, undermine confidence in the court, and deepen the divide among ordinary citizens, especially if you are seated by a Republican Senate weeks before the election of a Democratic president and congress. You have the opportunity to offer an alternative to all that by demanding that your nomination be suspended until after the election. We implore you to take that step.

We’re asking a lot, we know. Should Vice-President Biden be elected, your seat on the court will almost certainly be lost. That would be painful, surely. Yet there is much to be gained in risking your seat. You would earn the respect of fair-minded people everywhere. You would provide a model of civic selflessness. And you might well inspire Americans of different beliefs toward a renewed commitment to the common good.

We wish you well and trust you will make the right decision for our nation.

Read the names of the signers here.