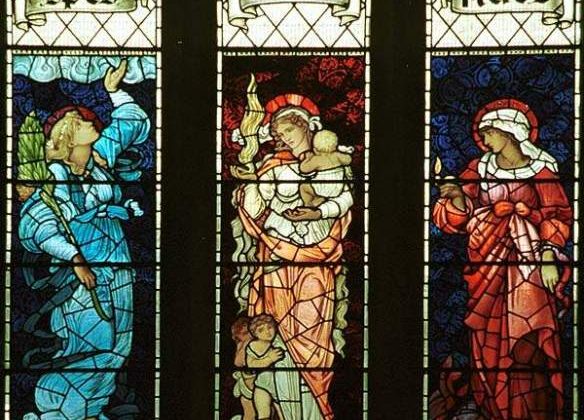 Over at “Syndicate,” Dartmouth religion professor Jeremy Sabella has put together a symposium on the Seven Deadly Sins (lust, gluttony, greed, sloth, wrath, envy, and pride), the Four Cardinal Virtues (prudence, courage, temperance, and justice), and the theological virtues of faith, hope, and love. It is titled “Sins & Virtues in American Public Life.”

My piece on the theological virtue of faith and American public life will appear on November 3, 2020.

The series began last week and will run through November 13, 2020. Here is a taste of Sabella’s introduction:

To paraphrase William Shakespeare: something is rotten in the state of our union.

We see it in our toppled monuments and overcrowded hospitals, feel it in the clouds of tear gas and welts from rubber bullets, hear it in the chants of protest slogans and the shouting at town halls. Yet we struggle to articulate what, exactly, has gone wrong.

The language we typically deploy to name political problems—the system is broken, our government is gridlocked—analogizes society to a massive machine, priming us to seek machine solutions to its dysfunctions. In a machine, if we identify the broken part, the blown fuse, the errant line of code, we can get it up and running good as new. By implication, if we can replace the defective parts of our social machinery—elect the right commander-in-chief, nominate the right Supreme Court justice, redraw gerrymandered districts—we can restore society to functionality. Both political parties have made such changes to great fanfare. Yet as a society we remain as broken and gridlocked as ever. Put simply, the changes aren’t working.

By evoking the breakdown of organic matter, Shakespeare’s language of rot points to an older understanding of society: not as a machine, but as a kind of organism. This biological imagery captures acute social crisis in ways that machine imagery does not. Machines break down and get fixed; organisms get sick, and with the right measures, can heal. But once the organism starts to rot—once the gangrene sets in—drastic measures are required to keep it from dying. Biological imagery clarifies what our moment requires: not another targeted, one-time intervention, but rather, full-scale transformation.

Which is where this symposium comes in. The reflections featured draw on the moral language of sin and virtue to describe contemporary social problems. This language presupposes the ancient image of society as a body politic. Plutarch’s Life of Coriolanus, for instance, describes the senate of the Roman republic as the stomach of the body politic, which digests nutrients and distributes them to the rest of the members. Similarly, Paul the Apostle uses bodily imagery to describe the relationship of individual Christians to the Christian community as a whole: “If one member suffers, all suffer together with it; if one member is honored, all rejoice together with it” (1 Cor 12:26). Both sources depict society, not as a machine composed of discrete parts, but as a body of interconnected parts that fall ill and heal as a single unit. And the language used to shape the morality of individuals can help diagnose and mend the body politic.

As they faced waves of famine, pandemic, and political unrest, medieval thinkers developed and refined the categories of the Seven Deadly Sins, the Four Cardinal Virtues, and the Three Theological Virtues. In tandem they comprise a kind of toolbox for the care of souls, where the sins diagnose types of spiritual illness and the virtues identify states of spiritual health. This symposium deploys this toolbox to cultivate a comprehensive view of what ails our own body politic and how to nurse it back to health. Each contributor has been tasked with choosing one of the sins or virtues to answer the same basic question: What does sin/virtue x look like in American public life?