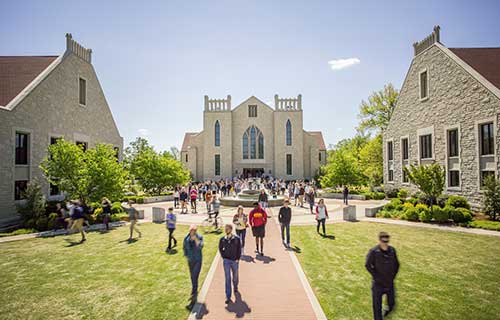 John Brown University is an evangelical college in Siloam Springs, Arkansas. Back in October 2018, I visited the university on the Believe Me book tour and was greatly impressed by the quality of the students and faculty.

On Tuesday, September 8, 2020, John Brown hosted an event titled “Should Christians Vote for Trump?” The evening featured a debate between conservative writer David French and court evangelical extraordinaire Eric Metaxas. This was a repeat performance of a debate that took place in April at the “Q” conference.

In response to Metaxas’ involvement in the event, a group of students decided to form “Love Activates Action,” a university movement which advocates for marginalized students on campus, according to its Instagram profile, @love_activates_action.

Before the event began, students gathered with signs outside the BPAC that expressed support for the Black Lives Matter movement and the LGBTQIA+ pride. Attendees who arrived at the recital hall could read their signs laid on the grass next to the sidewalk.

According to a statement released by Love Activates Action, student protesters aimed to “create awareness surrounding the harmful, toxic effects Eric Metaxas can have on our student body.” At the scene, students—some of whom expressed support for Metaxas—also gathered to share their views and engage in discussion with the group.

A few minutes after the event wrapped up, student protesters held their signs high for Metaxas to see as he walked out of the building. A couple of students even requested answers from Metaxas, but he did not comment.

On Sept. 1, a week prior to the event, the Center for Faith and Flourishing addressed students’ concerns with Metaxas’ invitation to campus. “JBU knows how to respectfully and reasonably engage with those with whom we disagree. We also trust that no one in our community will use the past statements or behavior of an invited speaker as an excuse to harass or act offensively toward any other member of our community,” the emailed statement read. “Verbally aggressive or violent approaches are not in keeping with principles of civil dialogue or engagement, nor are they consistent with JBU’s core guiding principles to support and care for individual uniqueness.”

Catherine Nolte’s reporting on the the event includes a reference to Metaxas’s defense of a punch he recently threw at an anti-Trump protester.