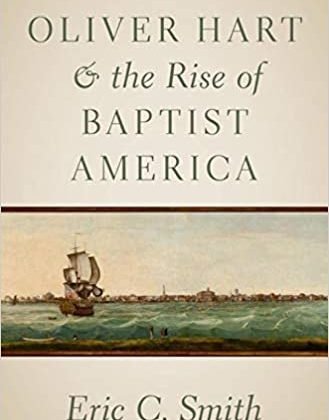 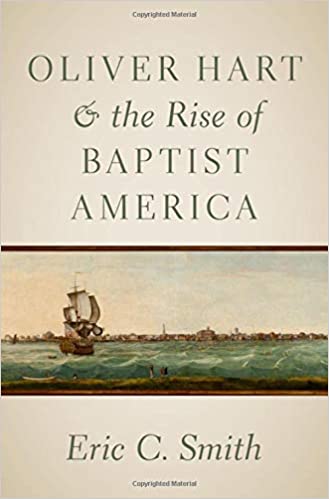 Eric Smith is Senior Pastor of Sharon Baptist Church in Savannah, Tennessee and Adjunct Professor of Historical Theology at the Southern Baptist Theological Seminary in Louisville, Kentucky. This interview is based on his new book, Oliver Hart and the Rise of Baptist America (Oxford University Press, 2020).

JF: What led you to write Oliver Hart?

ES: I wrote Oliver Hart and the Rise of Baptist America mostly because I wanted to tell the story of Oliver Hart, arguably the most important evangelical leader of the pre-Revolutionary South, whose thirty-year ministry in Charleston transformed Baptist life in the region. I also wanted to tell the understudied story of American Baptist transformation across the long eighteenth century; Hart provides a particularly useful window into that narrative.

JF: In two sentences, what is the argument of Oliver Hart?

ES: My book argues that Oliver Hart played a pivotal role in the rise of Baptist America in the second half of the eighteenth century by practicing a singular and understated style of religious leadership. Through his earnest piety, relational skills, and ability to integrate Baptist precisionism with the evangelical revivalism of the Great Awakening, Hart became Southern Baptists’ most important pioneer and a key contributor to Baptist ascendancy in America.

JF: Why do we need to read Oliver Hart?

ES: My book is the only biography of Oliver Hart, Southern Baptists’ most important pioneer and one of the most important evangelical leaders of the eighteenth century. If you read my book, you will also discover how American Baptists began the eighteenth century a small, scattered, disorganized sect, but ended it a large, rapidly growing, increasingly sophisticated, and relatively unified denomination in the young republic.

JF: When and why did you decide to become an American Historian?

ES: I have always been fascinated by the past! As a child in West Tennessee, I grew up enchanted by American history–exploring Shiloh National Military Park, listening to stories about Davy Crockett, watching the Ken Burns Baseball documentary on PBS with my dad, reading presidential biographies–and I’ve just never gotten over it. I’ve also always loved to write. So as a historian, I get to pursue the sheer joy of learning for myself, and then try to share what I’ve learned by telling the very best story I can to others. I’d love to produce for readers the kinds of informative and enjoyable stories about the past that I’ve benefited from through the years. My work so far has focused on Baptists, an important but relatively understudied group in American religious history. Since this is my own tradition, I have a personal interest in understanding how the Baptists have lived, worshipped, and participated in the larger American story (for good and for bad) through the centuries. Along the way, maybe I can shed some light on the Baptists for others, too.

ES: I have completed a biography of the eccentric but highly influential Baptist John Leland, which is currently under consideration with a publisher, and I have begun work on a critical biography of the nineteenth-century Southern Baptist leader John A. Broadus.