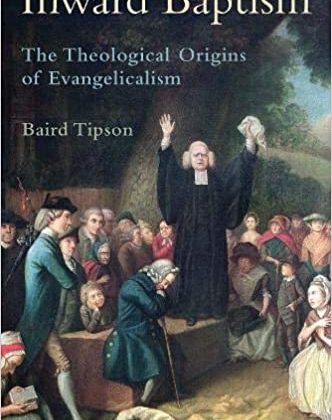 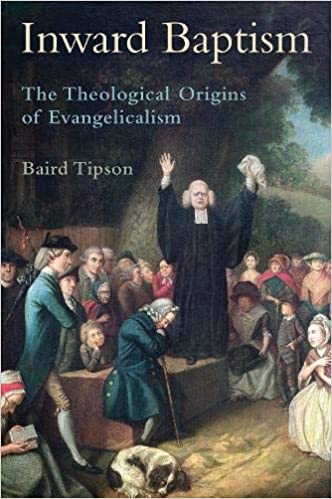 Baird Tipson is Adjunct Professor of Religious Studies at Gettysburg College. This interview is based on his new book, Inward Baptism: The Theological Origins of Evangelicalism (Oxford University Press, 2020).

JF: What led you to write Inward Baptism?

BT: The two and a half centuries following the Reformation (c. 1500-1750) saw critical changes in how people understood Protestant Christianity. For many, a religion that had once occurred largely invisible sacraments presided over by an ordained clergy became located primarily in the individual conscience and–for many–in perceptible experiences of the inward activity of the Holy Spirit.

JF: In two sentences, what is the argument of Inward Baptism?

BT: Inward Baptism argues that accepting Luther’s fundamental insights would eventually shift the balance from encountering the divine in clerically-controlled church services to encountering the divine in personal, largely interior, experience. Where Luther urged Christians to draw assurance of their being in God’s good graces from their having been baptized as infants, Wesley insisted they must–as adults–perceive the Holy Spirit at work in their hearts.

JF: Why do we need to read Inward Baptism?

BT: I hope I can convince conscientious readers of two things (1) the enormous differences between a sacramentally-oriented Christianity and one based primarily on knowing Jesus as a Christian’s personal savior, and (2) the possibility that evangelical Christianity is not some recent aberration but a virtually inevitable result of Protestantism’s commitment to justification by faith.

JF: Tell us a little bit about the source material you worked with in the writing and researching of Inward Baptism.

BT: Since this is a work of historical theology, I worked chiefly in printed sources, primarily the writings of individual theologians. (I did use a few manuscript sources as well). Since for the most part I was working beyond my own areas of specialization, I tested my interpretations against a raft of secondary sources. In the first three chapters, the printed sources were rarely in English, so I compared my own translations with those of other scholars wherever possible. Fortunately, much of my source material is available digitally, particularly in Early English Books Online and on the website of the Post-Reformation digital library.

BT: I am presently working on differing understandings within the Anglican tradition of The Book of Common Prayer. Recent scholarship has demonstrated to my satisfaction that Thomas Cranmer’s two prayer books (1549 and 1552) were transitional products that reflected his evolving theological commitments; had he lived and circumstances permitted, he would undoubtedly have made further modifications. But the Anglican tradition has come to understand The Book of Common Prayer as reflecting something called “Anglicanism,” in the process gliding over areas where Cranmer’s language was purposely imprecise. I am particularly interested at the moment in how participation in the sacraments does or does not “assure” the worshipper of God’s favor