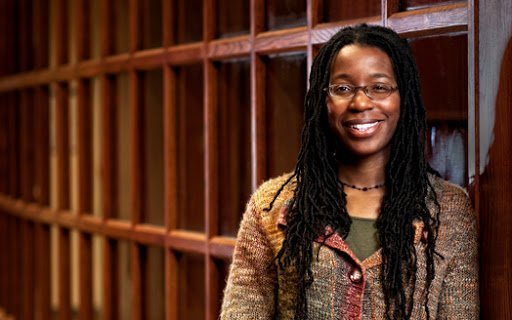 The Harvard Gazette is running an interview with Tiya Miles, the new director of the Warren Center for Studies in American History.

GAZETTE: What first drew you to public history?

MILES: When I began my journey in the landscape of public history, I didn’t even know I had taken the first steps. As a middle schooler, I had two favorite pastimes. Unbeknownst to my parents, I would let myself into the abandoned 19th-century houses in my downtown neighborhood in Cincinnati, examine the rubble around me, and imagine who had lived in these structures. I also grew up listening to my grandmother’s stories on her front porch as I helped her snap the green beans or clean the collards that she grew in her side yard. When I heard her describe the family farm back in Mississippi that was lost when a group of white men tricked my great-grandfather — who could not read — into placing his X-mark on a document, and her move north with several children in tow in the 1940s, and the challenges of urban life, I felt the urge to write it all down. I still have the scribbled notes. I was conducting a rudimentary form of oral history, a key method of public history, back then.

Public history has multiple definitions in part because it is a boisterous, crowd-sourced endeavor. The key trait of the field is an engagement with history beyond the walls of the campus or classroom. Because public history meets people where they are and affects how they make sense of their lives, it is a field complicated by public memory, emotional investments, and competing group aims. All of this makes the work thrilling and satisfying, but also vexing, time-intensive, and difficult.