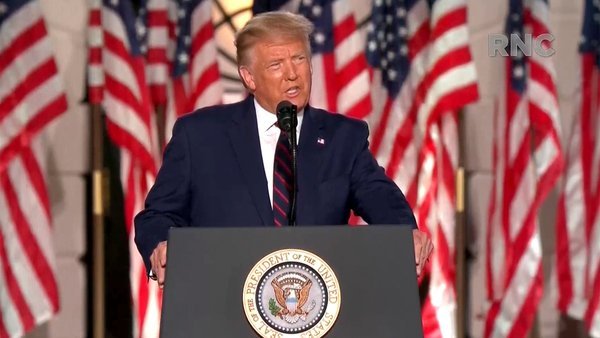 Well, it’s over. Last night Donald Trump, a president who lost the popular vote by 3 million and has never had his approval rating rise over 50%, used the White House–the “people’s house–for a political rally. Most of the sycophants in the crowd were not wearing masks and there was no social distancing.

Trump’s speech was filled with lies and misleading statements. His low energy reading of the teleprompter did not play to our hopes, it played to our fears. But this is now par for the course in the Trump administration. The president claimed that if Joe Biden gets elected, suicide, depression, drug and alcohol addiction and heart attacks would plague the country. (The only thing missing from this list is lower SAT scores). He suggested that if Joe Biden gets elected Black mobs will invade the white suburbs. Joe Biden will take your guns and abolish the police force. Be afraid. Be very, very afraid.

And most white evangelicals are on board. In fact, many of the court evangelicals were present at the speech.

Author Neal Gabler once said that “true religion…begins in doubt and continues in spiritual exploration. Debased religion begins in fear and terminates in certainty.” The great poet of the Jersey shore put it this way: “Fear’s a dangerous thing. It can turn your heart black you can trust. It’ll take a God-filled soul and fill it with devils and dust.”

Last night’s theme was “America: Land of Greatness.” But I don’t think court evangelical Franklin Graham got the message. Here is his opening prayer:

Graham talked about a nation in “trouble,” a nation “divided,” and a nation experiencing “injustice.” It was a good prayer. He turned to God, not Trump, for hope.

All week we have been hearing a lot about Trump as a man of empathy and compassion. He loves Black people. He loves women. He loves immigrants. Last night Trump claimed (again) that he has done more for the Black community than any president in American history (which is not true). But he failed to say anything about the plight of African Americans in this country. He ignored the family of Jacob Blake. It’s as if the real problems in America–death from coronavirus, racial unrest, and a struggling economy–do not exist in Trumpland.

I really don’t have much to say about last night that I haven’t written about many times before. Trump is a serial liar. Read NPR’s fact check here.

But near the end of the speech, Trump started riffing on the American past.

Our country wasn’t built by cancel culture, speech codes, and soul-crushing conformity. We are NOT a nation of timid spirits. We are a nation of fierce, proud, and independent American Patriots.

We are a nation of pilgrims, pioneers, adventurers, explorers and trailblazers who refused to be tied down, held back, or reined in. Americans have steel in their spines, grit in their souls, and fire in their hearts. There is no one like us on earth.

I want every child in America to know that you are part of the most exciting and incredible adventure in human history. No matter where your family comes from, no matter your background, in America, ANYONE CAN RISE. With hard work, devotion, and drive, you can reach any goal and achieve every ambition.

Our American Ancestors sailed across the perilous ocean to build a new life on a new continent. They braved the freezing winters, crossed the raging rivers, scaled the rocky peaks, trekked the dangerous forests, and worked from dawn till dusk. These pioneers didn’t have money, they didn’t have fame– but they had each other. They loved their families, they loved their country, and they loved their God!

When opportunity beckoned, they picked up their Bibles, packed up their belongings, climbed into covered wagons, and set out West for the next adventure. Ranchers and miners, cowboys and sheriffs, farmers and settlers — they pressed on past the Mississippi to stake a claim in the Wild Frontier.

Americans built their beautiful homesteads on the Open Range. Soon they had churches and communities, then towns, and with time, great centers of industry and commerce. That is who they were. Americans build the future, we don’t tear down the past!

We are the nation that won a revolution, toppled tyranny and fascism, and delivered millions into freedom. We laid down the railroads, built the great ships, raised up the skyscrapers, revolutionized industry, and sparked a new age of scientific discovery. We set the trends in art and music, radio and film, sport and literature — and we did it all with style, confidence and flair. Because THAT is who we are.

Whenever our way of life was threatened, our heroes answered the call.

From Yorktown to Gettysburg, from Normandy to Iwo Jima, American Patriots raced into cannon blasts, bullets and bayonets to rescue American Liberty.

But America didn’t stop there. We looked into the sky and kept pressing onward. We built a 6 million pound rocket, and launched it thousands of miles into space. We did it so that two brave patriots could stand tall and salute our wondrous American flag planted on the face of the Moon.

For America, nothing is impossible.

Trump said that the settlement of the West resulted in the creation of “churches and communities.” This was followed, in Trump’s view of history, by “industry and commerce.” Then came railroads, ships, skyscrapers, and victory in World War II. And finally the moon landing. I am surprised he did not use a quote or two from Rudyard Kipling.

What we heard last night was an eighteenth-century “stages of civilization” view of history, a progressive and Whig history focused on the inevitable triumph of liberty and freedom for all white Americans, and a Frederick Jackson Turner-esque story of rugged individualism. I am going to bet that the speech was written by Stephen Miller, Trump’s nativist alt-Right staff member who has spent his short career in politics celebrating the superiority and conquest of the white race.