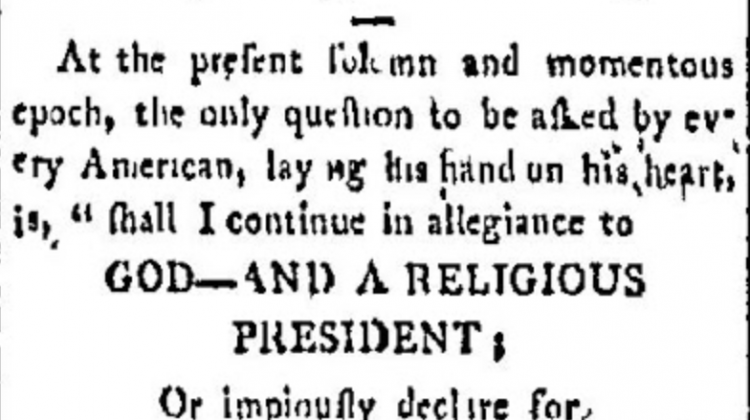 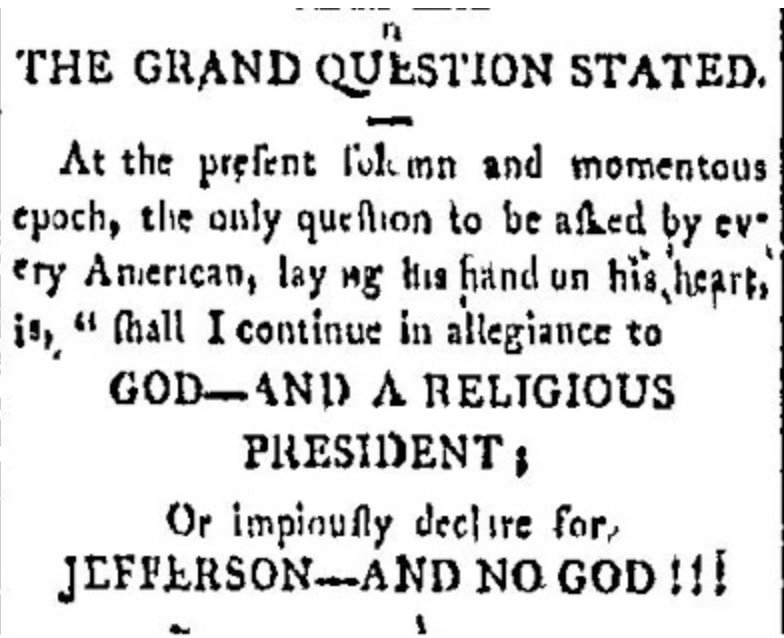 It’s been 220 years since the religion card was played so bigly in an American presidential campaign. The precedent is more apt than you might think.

The election of 1800 pitted the incumbent president, John Adams, against his old-friend-turned-bitter-rival Vice President Thomas Jefferson. In the two-party system that had emerged in the 1790s, Adams was the Federalist, Jefferson the Democratic-Republican. The Federalist case against Jefferson centered on charges that he was a “Jacobin,” a radical on the order of the French revolutionaries he had admired since serving as American ambassador to France in the late 1780s.

In a series of newspaper articles published in 1798, Alexander Hamilton attacked those revolutionaries for trying to “undermine the venerable pillars that support the edifice of civilized society,” not least by “the attempt … to destroy all religious opinion, and to pervert a whole people to Atheism.”

Hamilton claimed that Jefferson was, like them, an atheist who, with the help of fellow American Jacobins, would pursue the same agenda if elected. In the words of another Federalist writer, the choice was clear: “GOD—AND A RELIGIOUS PRESIDENT … [or] JEFFERSON AND NO GOD.”

Unlike Trump, John Adams did not himself attack Jefferson for irreligion. And unlike Biden, who called Trump’s attack “shameful,” Jefferson did not publicly respond to the attacks. As he wrote to James Monroe, “As to the calumny of Atheism, I am so broken to calumnies of every kind … that I entirely disregard it.”

The analogy is not perfect, but there are certainly similarities. Trump’s words about Biden play upon white evangelical fears over the decline of “Christian America.” Similarly, anxiety over the secular assault on America’s Christian political institutions played a predominant role in the presidential election of 1800. Adams was a New England Federalist who defended the idea that republics only survive when built upon the moral foundations of Christianity. Jefferson, Federalists believed, was most responsible for allowing infidelity to flourish in America.

Jefferson had the support of frontier, largely uneducated, evangelicals–such as Methodists and Baptists–who shared his commitment to religious liberty. It is noteworthy that the religious liberty-loving ordinary farmers supported that supposed “anti-God” candidate.

The Federalists, mostly members of the educated classes, called attention to Jefferson’s heretical beliefs: Jefferson did not believe in the Trinity, the resurrection of Jesus Christ, or the divine inspiration of the Bible. He was not the kind of leader who should be the president of a Christian nation, the Federalists said, and they were prepared to stage an intense political campaign to discredit him before the American people.

The attacks on Jefferson’s supposed godlessness were relentless. William Linn, a Federalist minister from New York, chaplain of the House of Representatives, and a former president of Queens College (today Rutgers University), opposed Jefferson’s candidacy because of the vice-president’s “disbelief in the Holy Scriptures…his rejection of the Christian religion and open profession of Deism.” Linn feared that under Jefferson’s rule, the United States would become a “nation of Atheists.” Linn made clear that “no professed deist, be his talents and acquirements what they may, ought to be promoted to this place [the presidency] by the suffrages of a Christian nation.” He even argued that the act of “calling a deist to the first office must be construed into no less than rebellion against God.” For Linn, the evangelical choice was clear. If the people were to choose “a manifest enemy to the religion of Christ, in a Christian nation,” it would be “an awful symptom of the degeneracy” of America.”

Upon hearing that Jefferson was elected, frightened New England evangelicals thought that the new president’s henchmen would soon be coming to their towns and homes on a mission to take away their Bibles.