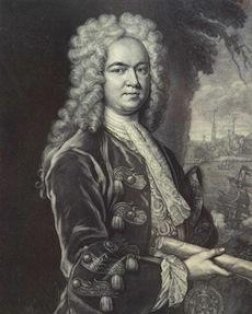 Yesterday I was reading the minutes of the Spring 1754 meeting of the New Jersey General Assembly held in Perth Amboy.

The meeting opened with a message from royal governor Jonathan Belcher urging the Assembly to send a delegation to Albany, New York in June 1754 to participate in the Albany Congress.

I… earnestly recommend to your most deliberate and mature Consideration, these extraordinary Proceedings [in Albany]; and then I shall not doubt your doing every Thing in your Power, in Aid and Assistance with the rest of the English Colonies: I say, I hope you will cheerfully unite with them, to ward off from yourselves and your Posterity, the fatal Consequences that must attend the present unjustifiable Violences and Insults of the French (in Conjunction with the Indians).

As Belcher notes, the Albany Congress was called to discuss the mutual defense of the British colonial frontiers against French and native American invasion. (It is best known, however, for Ben Franklin’s so-called “Albany Plan of Union“).

The New Jersey Assembly responded to Belcher’s call in the negative. They refused to participate in any plan of mutual colonial defense until other colonies–especially Pennsylvania and Maryland– committed first:

it does not appear that Schemes are concerted by the several Governors of the Colonies, for preventing the Incroachments of the French, upon His Majesty’s Dominions; nor does it appear, that the Colonies of Maryland and Pennsylvania, have yet done any Thing in that Affair; though they are situated much nearer to the French Forts: That his House is of Opinion with your Excellency, that there should be strict Union amongst all his Majesty’s Colonies, on this Important Affair: But as this Colony, have never been Parties to any Treaties with the Five Nations; and their Allies, nor Partakers of the Benefits of the Indian Trade, and consequently quite unacquainted with the Interest and Trade of those Indians; they therefore hope it will not be taken as a Neglect of the Common Cause at this Time, to leave the Management of the Treaty to the Colonies that are accustomed to carry on those Negotiations.

In other words, the New Jersey Assembly said that the French and Indian threat on the frontier was not really their problem. They were happy to help, but only after other colonies more susceptible to French and Indian raids stepped-up.

They are of Opinion from Lieutenant Governor Dinwiddie’s Letters to your Excellency that Nothing appears in them more than a Design to build a Fortification in the Forks of Ohio, in order to check the Incroachments of the French and to protect the Indians in Alliance with Great Britain, in that Part of the Country: And from the Time these Things have been in Agitation in the Colony of Virginia, they are in Hopes they are, before this Time, happily completed: However, the Duty and Loyalty of the good People of this Colony, sufficiently appears by their Conduct on former Expeditions.

In other words: “we would love to help, but:

This Colony, though lying under a great Load of Debt, by assisting his Majesty in the late Wars against Spain and France, are, however, willing chearfully to contribute towards the Assistance of the other Colonies, in what is necessary towards preventing the Incroachment of the French on his Majety’s Dominions  ,but at present, are not of Ability to do it; having no Money in the Treasury, nor any Funds upon which it can be raised.”

Needless to say, Belcher was not happy about this response. First, he corrected the Assembly by informing them that Pennsylvania and Maryland had indeed agreed to send representatives to Albany in June. Second, he said that the New Jersey colony would benefit from peaceful relations with the Indians, especially on the “Northern Boundary of this Province.”

Belcher thought that the Assembly was acting selfishly. If they really wanted to do their part for the British Empire they could raise money through taxes. (This would become a heated political issue down the road).

Moreover, by refusing to participate in the conversations at Albany, New Jersey might lose “his Majesty’s Favour.” Belcher makes an interesting point here. Some have interpreted the Albany Congress–the first attempt to bring all the colonies together for a common purpose–as a forerunner to the American Revolution. These historians point to the fact that the Albany Plan of Union, proposed by Ben Franklin at the meeting, was invoked by the First Continental Congress in Fall 1774 as a model for political union amid the imperial crisis. But that is not what was happening here in 1754. Belcher, a representative of the Crown, makes it clear that New Jersey’s failure to send delegates to Albany would hurt their standing in the British Empire.

On June 5, after a committee of assemblymen considered Belcher’s response, the body seemed to be more open to working with their neighbors. The committee concluded:

The Assembly voted 18-3 in favor of considering support for their neighbors as soon as a “well-concerted Scheme” was in place.

Belcher thought this was a weak response:

I have this Session laid before you, the Necessity of your enabling me to send Commissioners to meet at the present Congress at Albany, and also to make a suitable Present to the Indians, to continue them our Allies and Friends. I have also recommended to you, your doing something to strengthen the Forces raised in Virginia, to repel the French out of the King’s Dominions on the River Ohio; but to all this you have turned a deaf ear: Neither the Expectations of his Majesty, his Honour and Dignity, and Peace, Happiness, Safety, and Lives of his Subjects, in these his Dominions, have moved you; but rather than to give a helping Hand, you seem willing to suffer the French to enter into, and possess themselves of, a great Tract of Land (undoubtedly belonging to the Crown of Great Britain) and tamely permit a most cruel and barbarous Enemy, to have it in their Power, at their Will and Pleasure, to murder and destroy Hundreds of Families in this and the neighbouring Colonies; which more certainly will be the Case, if the French are allowed to continue on the Lands of the Ohio.”

Belcher railed against the Assembly’s unwillingness to send representatives to Albany until the delegates who attended this meeting put forth a “well-concerted Scheme.” He wrote: “Can this be judged any Thing but an intended Evasion? Do you expect to be consulted in the Scheme, or Plan of Operation?” Belcher wanted New Jersey to have a seat at the table in Albany.

Your Conduct has rendered it absolutely my Duty, for the Honour of his Majesty, and the future Well-being of his Colony, to dissolve this present Assembly; thereby putting it in the Power of the good People of this Province, to show how they stand affected in the Choice of their future Representatives, for the Good of the great and common cause, recommended to you this Sessions.

Would New Jersey send a delegation to the Albany Congress?