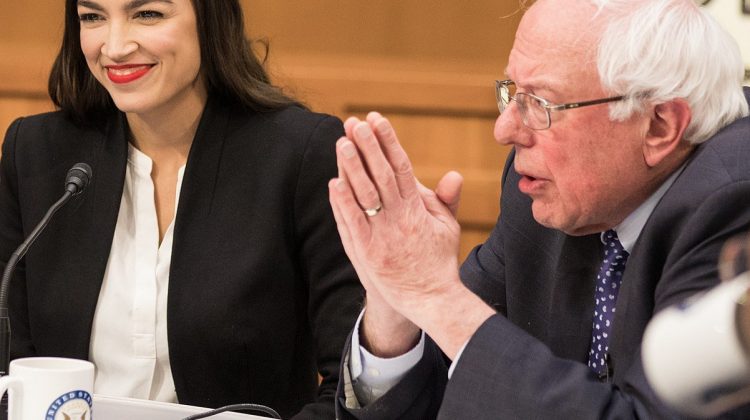 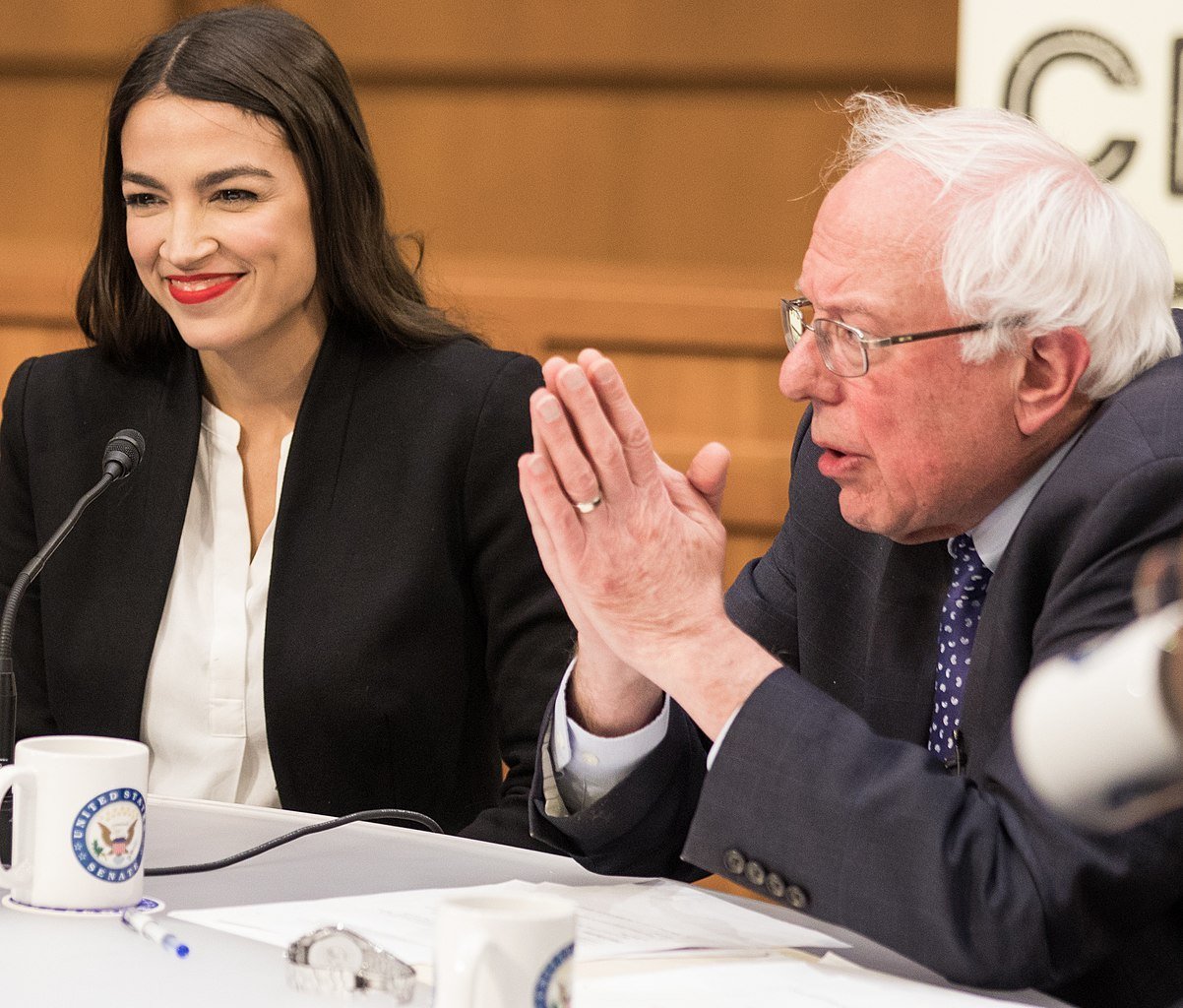 I want to highlight again something I mentioned briefly in this post.

What do real socialists say about Bernie Sanders, Alexandria Ocasio Cortez, and others on the left-wing of the Democratic Party who are frightening America conservatives and white evangelicals as we approach the 2020 elections?

The following quotes come from the World Socialist Web Site (WSWS), a Marxist organization of the International Committee of the Fourth International. They are followers of Russian revolutionary Leon Trotsky. I am guessing many of my readers are unfamiliar with this organization.

Here is the WSWS on Bernie Sanders 2016 campaign for president:

…what is remarkable about Sanders is how vacuous his supposed radicalism really is. He is far less radical in his domestic policy than the Populists, the anti-Wall Street presidential campaigns of William Jennings Bryan, and the Farmer-Laborites. In the crucial area of foreign policy, he is virtually indistinguishable from Obama and Hillary Clinton, even attacking them from the right on issues like trade with China. When asked directly last year about his attitude to US military intervention abroad, he declared he was for “drones, all that and more.”

If Sanders goes on to win the Democratic nomination and the presidency, he will betray the aspirations of his supporters flagrantly and with extraordinary speed. A thousand excuses will be brought forward to explain why the wars must continue abroad and nothing can be done to rein in Wall Street at home.

Sanders is not the representative of a working class movement. He is rather the temporary beneficiary of a rising tide of popular opposition that is passing through only its initial stages of social and class differentiation.

He declared Tuesday that his campaign is “about transforming our country and creating a government based on the principles of economic, social, racial and environmental justice,” but he said nothing about how this could be achieved through the vehicle of the Democratic Party.

The fundamental fraud promoted by Sanders, along with individuals such as Alexandria Ocasio-Cortez, is that the Democratic Party can be pushed to the left and made a force for progressive change. Articulating this political fiction, Jacobin editor and leading Democratic Socialists of America (DSA) member Bhaskar Sunkara proclaimed in a column for the Guardian newspaper on Tuesday that “Sanders started a revolution in 2016. In 2020, he can finish it.”

Here is the WSWS on Alexandria Ocasio-Cortez:

Ocasio-Cortez feeds on “half-thoughts” in the sense that she criticizes social inequality, global warming, etc., but refuses to say anything about the social and historical conditions that produce these maladies and the political forces responsible. She proposes curing inequality by supporting the Democratic Party, one of the two parties that promoted it. She proposes to attack the wealth of the rich without attacking the social system upon which this wealth is based.

Such “half-truths” are, as Trotsky noted, the worst form of falsehood—they aim to chloroform, to misdirect, and thereby provide an essential service to the ruling class. All those who promote her, as they promoted Sanders before her and Obama before him, are assisting in this process of political cover-up.

There are social interests that underlie these politics. Pseudo-left groups like the Democratic Socialists of America, the International Socialist Organization and Socialist Alternative, which promote figures like Ocasio-Cortez and Sanders, use populist slogans to cover over the fundamental class issues, subordinate the working class to the Democratic Party, and promote the social interests of more privileged sections of the upper-middle class.

Here is the WSWS on The Squad’s 2019 disagreements with Nancy Pelosi:

Everything about this supposed conflict is a political fraud. Ocasio-Cortez is not leading a rank-and-file revolt, nor is Pelosi seeking to crush such a rebellion. No such rebellion exists, only a cynical division of labor. Pelosi pushes through the policies demanded by big business and the military-intelligence apparatus, and Ocasio-Cortez and a handful of others seek to give the Democratic Party a “left” face so that it can better disguise its right-wing policies in the 2020 election campaign.

Here is the WSWS on Black Lives Matter:

“Black Lives Matter” has been adopted as a rallying cry by interracial and interethnic crowds of youth and workers protesting the actions of the police across the planet because it evokes their rage over the fact that the lives of black workers and youth do not matter to the ruling elite. In opposing police violence across the world, workers and young people must embrace a political strategy aimed at more than the rebranding and racial diversification of the bodies of armed officials which comprise the guards of the capitalist class. In order to put an end to the onslaught of police violence, war and social inequality, the protests must turn to the working class as whole and advance a program of revolutionary socialism.

Here is the WSWS on a Black Lives Matter statement in the wake Trump’s election:

On November 15, Black Lives Matter Global Network released a statement on the election of Donald Trump that ignores the facts of the vote to present a false interpretation of American society as one dominated by racial hatred.

This racialist narrative goes hand in hand with the endorsement by the top leadership of Black Lives Matter of Democrat Hillary Clinton, whose campaign was based on a combination of personal attacks on Trump, anti-Russian propaganda and the promotion of racial and gender politics.

The statement is a semi-coherent collection of bald and unsubstantiated assertions, non-sequiturs and moralistic declarations. Even apart from its politically reactionary content, it has no intellectual substance and offers no perspective for achieving its stated goal, which is to “end all state-sanctioned violence until all Black Lives Matter.”

The statement is perhaps most remarkable for what it lacks. Names that do not appear include Obama, Clinton and Sanders. Also absent are the words “Democratic” and “Republican.” Other words not to be found include “capitalism,” “unemployment,” “inequality,” “poverty,” “working class,” or any reference to the social crisis in America.

Instead, the authors operate with the abstract and ahistorical terms associated with identity politics. Without citing any evidence, the statement asserts that a “white supremacist” was voted into office by an electorate opposed to “dismantling white supremacy.”

At Amherst College and Princeton University, protesters have demanded that the schools change the names of buildings named after figures who demonstrators say were racist. At Amherst, students are demanding that the school officially renounce its namesake, Baron Jeffery Amherst, an 18th century British Army Field Marshall. Princeton students are likewise demanding that the school drop the name of the Woodrow Wilson School of Public and International Affairs because of the 28th president’s racism.

The working class is entitled to ask: Is this a movement that has a progressive character? Do the demonstrators deserve at least critical support? The answer to both questions is no.

These protests are not part of a movement for social equality or civil rights. Rather, they are of a typically middle class character and represent a very familiar and toxic element of bourgeois politics: the fight amongst different factions within the wealthiest ten percent for a more favorable distribution of wealth at the top. The extreme concentration of wealth among the top 1 percent generates resentment and grievances within broader sections of the affluent middle class, and the various factions seek to stake their claims to wealth, privilege and positions of influence by utilizing the politics of race, gender, sexual orientation and nationality.

The Marxists at The World Socialist Web Site are just as angry as conservatives and many white evangelicals about the cultural politics of the left-wing of the Democratic Party, the academy, and Hollywood. For example, these Marxists have waged the most intense and sustained battle against The New York Times 1619 project, even recruiting prominent American historians such as Gordon Wood, James McPherson, Richard Cawardine, Clayborne Carson, Victoria Bynum, and James Oakes in their battle against it. They believe that identity politics, especially those that focus on race, serve to divide the international working class–a community of laborers that Marxists believe transcends race.

I encourage you to listen to our conversation with WSWS historian Thomas Mackaman in this episode of The Way of Improvement Leads Home Podcast.