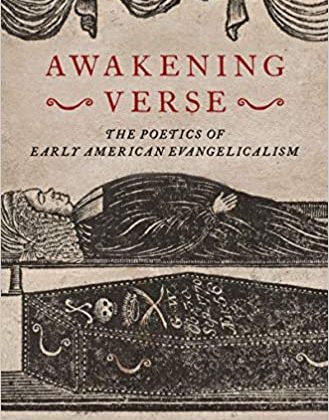 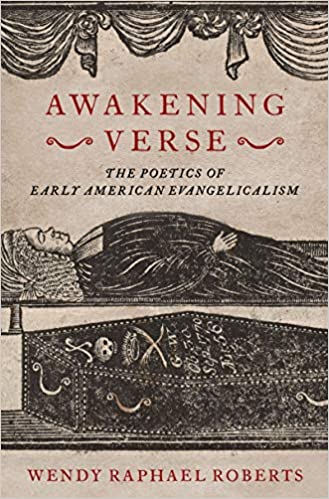 Wendy Roberts is Assistant Professor of English at the University of Albany, SUNY. This interview is based on her new book, Awakening Verse: The Poetics of Early American Evangelicalism (Oxford University Press, 2020).

JF: What led you to write Awakening Verse?

WR: When I began to study American poetry seriously in graduate school, I simply could not believe that early evangelicalism would have had no impact on verse in early America; yet, it seemed absent from most of the conversation. When it was there, it was a discussion primarily about hymns. I wondered if people involved in the early revivals wrote non-hymnal poetry and what function it served. It turns out they did—a lot of it—and that it was central to their experience and to the development of both American history and literature.

JF: In two sentences, what is the argument of Awakening Verse?

WR: Awakening Verse, which is the first history of non-hymnal poetry in British North America, argues that early evangelicalism must be understood as a central aesthetic movement of the eighteenth century; and that to understand early evangelicalism as it first took shape requires sustained attention to its prolific poetry. I show that verse was foundational to evangelical belief and culture because it infused believers with the emotions and feelings necessary for a close relationship with Christ, for living out tensions in theology and society, and for performing lay ministries.

JF: Why do we need to read Awakening Verse?

WR: I think most people will be surprised at the extensive role of poetry in early America. Trying to understand early American culture, and especially evangelicalism, without attention to poetry is akin to trying to understand the last decade without acknowledging the influence of social media. Because the book helps break down a split between “secular” literature and religion, and between “highbrow” and “lowbrow” literatures, it reveals that literature and religious experience are deeply entwined, and that entanglement is important to American history. Even further, this book is important to read now because it shows how revival verse produced evangelical feelings that reinforced certain classed, raced, and gendered structures. Evangelicals have prided themselves on creating a less hierarchal and a more accessible version of Christianity. Yet, the actual history is much more complicated. Right now white evangelicals are reckoning with their complicity with white supremacy; this book can help with that endeavor.

WR: I have always loved poetry and analyzing words and rhetoric. But I think that my own experience at an evangelical university and then a secular university made me hyper-aware that textual analysis is crucially tied up in history. At the same time, you cannot get to those meanings outside of the words. To me this pointed toward a beautiful messiness that I thought could produce respectful dialogue between Christian and non-Christian perspectives. This motivated me to study literary history.

WR: I have two projects: one seeks to answer the question of what the evangelical long poem, which became popular in the eighteenth century, tells us about the relationship of settler colonialism and evangelicalism. The other is a history of the poetic coteries with which Phillis Wheatley, the first Black American woman to publish a book of poetry, interacted.