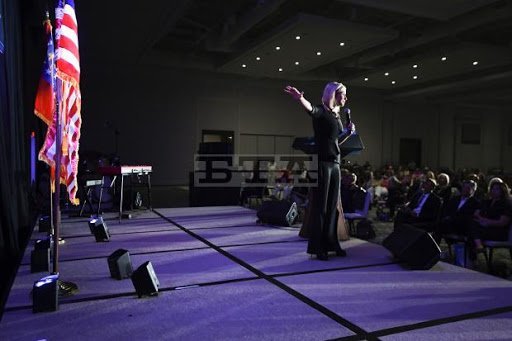 This weekend court evangelical Paula White hosted a face-to-face event in Alpharetta, Georgia as part of the “Evangelicals for Trump” wing of the Trump 2020 campaign. Watch it here.

Jenetzen Franklin says that evangelicals who believe in the Bible, the sacredness of life, supporting Israel, and law and justice “must “speak now or forever hold your peace, you won’t have another chance.” If Trump does not get elected, Franklin says, Christians will not have freedom of religion or freedom of speech. This line got a standing ovation. Franklin says that we only have three months (November) to save America. This is evangelical fear-mongering 101.

Harry Jackson calls for racial healing in the country. The applause is a lot more tepid than the applause Franklin received. No one seems to think that his support for Confederate flag-loving Donald Trump might contradict this message.

Ralph Reed starts by thanking the “God-fearing, Bible-believing Christians” of the state of Georgia for making sure Stacy Abrams did not win the governorship in 2018. Instead of Abrams, the people of Georgia got this.

Reed calls Abrams the “most radical, extreme, far-Left, governor” in the history of the South. It is worth remembering that Abrams would have been the third Black governor in the history of South and the first woman. Since the Civil War, the former Confederacy has had only two Black governors. P.B.S. Pinchback was governor of Louisiana for about a month (December 9, 1872 to January 13, 1873) and Douglas Wilder was governor of Virginia from 2005-2009. Only about 11% of white evangelicals in Georgia voted for Abrams. Reed, of course, knows how to appeal to the Trump base.

Reed also says that he senses “God’s anointed in this place.” He speaks with an arrogant certainty about the will of God and claims to know that God is on Trump’s side. Reed sees through a glass clearly.

Reed tells a story about how “thunderstruck” and upset he was when Antonin Scalia died in February 2016. He thought God had abandoned the country by allowing Scalia do die so close to the presidential election. But when Senate majority leader Mitch McConnell said that he would not give the Obama nominee Merrick Garland a hearing, and would wait until after the 2016 election to start Senate proceedings on Scalia’s replacement, Reed knew God had intervened in human history and had answered the prayers of all true Christians. This story speaks volumes about the political playbook of the Christian Right. Trump said he can shoot someone on Fifth Avenue and still win in 2016. I think Trump can shoot someone on Fifth Avenue and still have conservative evangelical support in 2020 as long as he appoints conservative justices.

Alveda King, the niece of Martin Luther King Jr., read some scriptures. I am not sure what she was trying to say, but she is Alveda King’s niece and she supports Trump.

Lee says we should vote for Donald Trump because he is a “man’s man.” (Later today I am interviewing historian Kristin Kobes Du Mez about her new book Jesus and John Wayne so this kind of tough-guy masculinity is fresh on my mind right now).

In response to mayors and governors who are trying to protect people from the coronavirus, Lee says: “Get your hands off the church of Jesus Christ. Don’t tell me what to do. Don’t you tell my congregation what to do. You think we’re idiots. You don’t think we know to protect ourselves?” He tells evangelical pastors that they should be “scared to the core” because “they’re gonna come for ya!” He even tells them to whistle the theme song to the television show COPS:

White evangelicals have believed that “they” (Thomas Jefferson, the Illuminati, abolitionists, modernists, the Supreme Court, “big government,” the Clintons, Obama) have been “coming for them” for a long time.

Lee concludes that the church should be a “shock force” for a “moral revolution” in this country. Something tells me that this is not the kind of moral revolution that Jonathan Wilson-Hartgrove and others are preaching.

The last speaker is Paula White. She tells about her history with Trump and praises the moral character of the entire Trump family. She calls Biden a “trojan horse” who will bring the “radical left” into the mainstream of America. At this point she gets pretty fired-up and starts ripping through Christian Right talking points.

It is hard to get a good look at the crowd, but I do not see many masks. The only person on the stage wearing a mask during the final prayer is Alveda King.