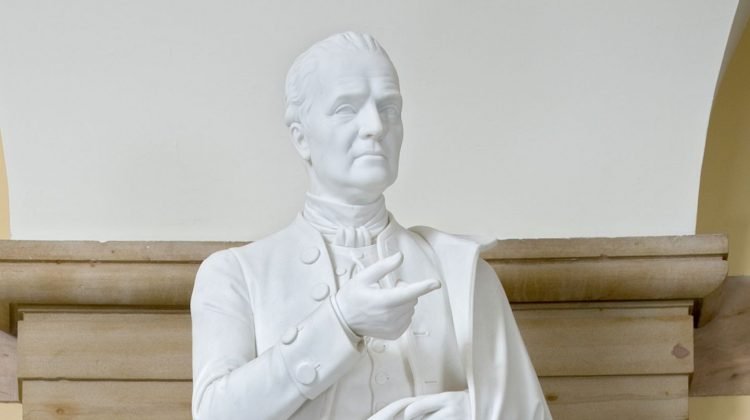 Here’s one to talk about over coffee.

Richard Kreitner, a writer at The Nation, makes a case for why a monument to founding father Roger Sherman should be removed from the United States Capitol. His argument is two-fold:

Here is a taste of Kreitner’s piece at The Baffler:

As we commence a thorough and long-delayed reassessment of our national history, the compromise tradition Sherman represents—and the specific bargains attributed to him—ought also to be reconsidered. It is long past time to embrace the righteousness of those rare and visionary anti-slavery critics who, during the struggle over ratification of the Constitution, called for rejecting it because of the protections it afforded slavery. Accepting those compromises, as one put it, would make Americans “partakers of each other’s sins.” “If we cannot connect with the Southern states without giving countenance to blood and carnage, and all kinds of fraud and injustice,” another Anti-Federalist argued, “I say let them go.”

Roger Sherman, by contrast, epitomizes the kind of moral complicity with evil, as pernicious as the evil itself, on which the endurance of the Union has always been predicated. His statue should be removed from Capitol Hill as a symbol of a broader reckoning with the history and nature of the country he helped create. Mississippi legislators recently made the brave if belated decision to take the Confederate battle flag off the state’s official banner. Michigan’s congressional delegation—well, at least its Democratic members—called for the removal of Lewis Cass, the heretofore much-heralded “founding father” of the state, from the Capitol Hill collection, in acknowledgment of his advocacy for slavery’s expansion and Indian removal. Why shouldn’t Connecticut’s leaders act with similar vision and boldness by admitting their own state’s sordid contributions to the perpetuation of slavery and minority rule?

Up to now, Northerners and other Americans without personal connection to the antebellum South have largely luxuriated in the assumption that they have nothing to apologize for and no heroes in need of reconsideration. But perpetuating the Union on the basis of slavery, right up until the Civil War, was a national project that enjoyed, but for a few scattered abolitionists, national support. Similarly, much of the federal government’s current paralysis is directly the fault of the Constitution’s enshrinement of colonial-era divisions and states’-rights ideology in the structure of our governing institutions. Taking Sherman off his Capitol Hill pedestal would mark a worthy beginning, but one that is ultimately symbolic. Of far greater substance and significance would be doing away with that even more prominent monument to the founders’ fetish for compromise and corrupt bargains: the Senate of the United States.

By the way, Kreitner anticipates the “where do we draw the line?” argument:

Conservatives immediately resort to the “where does it all end?” argument. What about slave-owners George Washington and Thomas Jefferson? Is Abe Lincoln next? Yet the answer is not complicated: we shouldn’t endeavor to remove every person who ever uttered an unwoke word or did any kind of dastardly deed. There ought to be a high bar for removal—some kind of equation balancing the degree of the wrong the person did with the magnitude of its consequences.

I submit that Roger Sherman meets the necessary threshold. He is memorialized by one of the statues representing the state of Connecticut. We have Sherman to thank for two of the most celebrated and most odious compromises that made it into the Constitution. One nearly destroyed the Union; the other may yet. Yanking Sherman out of the Capitol would be a gesture worthy of our growing realization of how deep the roots of white supremacy reach, how thoroughly our political system has been tainted by the protections it affords to the power and privilege of wealthy white men. This is unlikely to occur, however, for to repudiate Roger Sherman would be to effectively repudiate the Constitution of the United States, even the Union as we have always known it.

Based on Kreitner’s logic, wouldn’t everyone who signed the Constitution be “morally complicit?” But perhaps that is his real point.