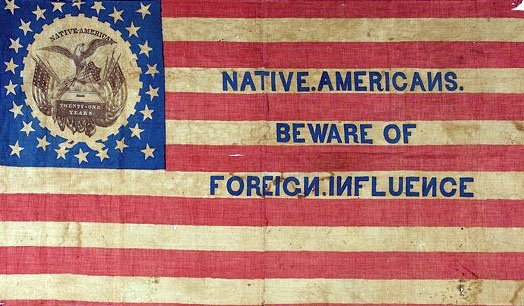 As Bruce Springsteen once said, “Fear’s a dangerous thing. It can turn your heart black, you can trust. It’ll take your God-filled soul and fill it with devils and dust.”

Fear has been a staple of American politics since the founding of the republic. In 1800, the Connecticut Courant, a Federalist newspaper that supported President John Adams in his reelection campaign against Thomas Jefferson, the founding father and religious skeptic from Virginia, the country would have to deal with a wave of murder, atheism, rape, adultery and robbery.

In the 1850s, the anti-Catholic and anti-immigrant American Party, commonly known as the “Know-Nothing Party,” was infamous for its American-flag banner emblazoned with the words “Native Americans: Beware of False Influence.”

In modern America, campaign ads keep us in a constant state of fear–and not always from right-wing sources either. I still get a shiver up my spine when I watch “Daisy Girl,” the 1964 Lyndon Johnson campaign advertisement. Watch:

And here is Richard Nixon in 1968, another “law and order” president:

Political fear is so dangerous because it usually stems from legitimate concerns shared by a significant portion of the voting population. For example, there are groups who want to defund the police. Television and social media make it easier for politicians to define our fears for us. They take these legitimate concerns, as political theorist Corey Robin puts it, and transforms them “into imminent threats.”

Jason Bivins, another scholar of fear, has noted that “moral panics” tend to “rely on presumptions more than facts; they dramatize and sensationalize so as to keep audiences in a state of continual alertness.” For example, Joe Biden does not want to defund the police. Nor do most Democrats. Yet Trump has managed to convince his followers that Biden and the Democratic Party are imminent threats to the country because of their supposed views on this issue.

Many of the people who will be scared by this new Trump ad are evangelical Christians. I wrote about their fear in Believe Me: The Evangelical Road to Donald Trump.