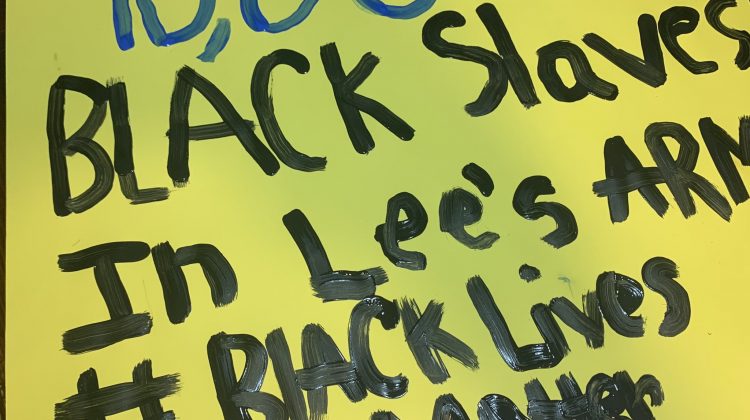 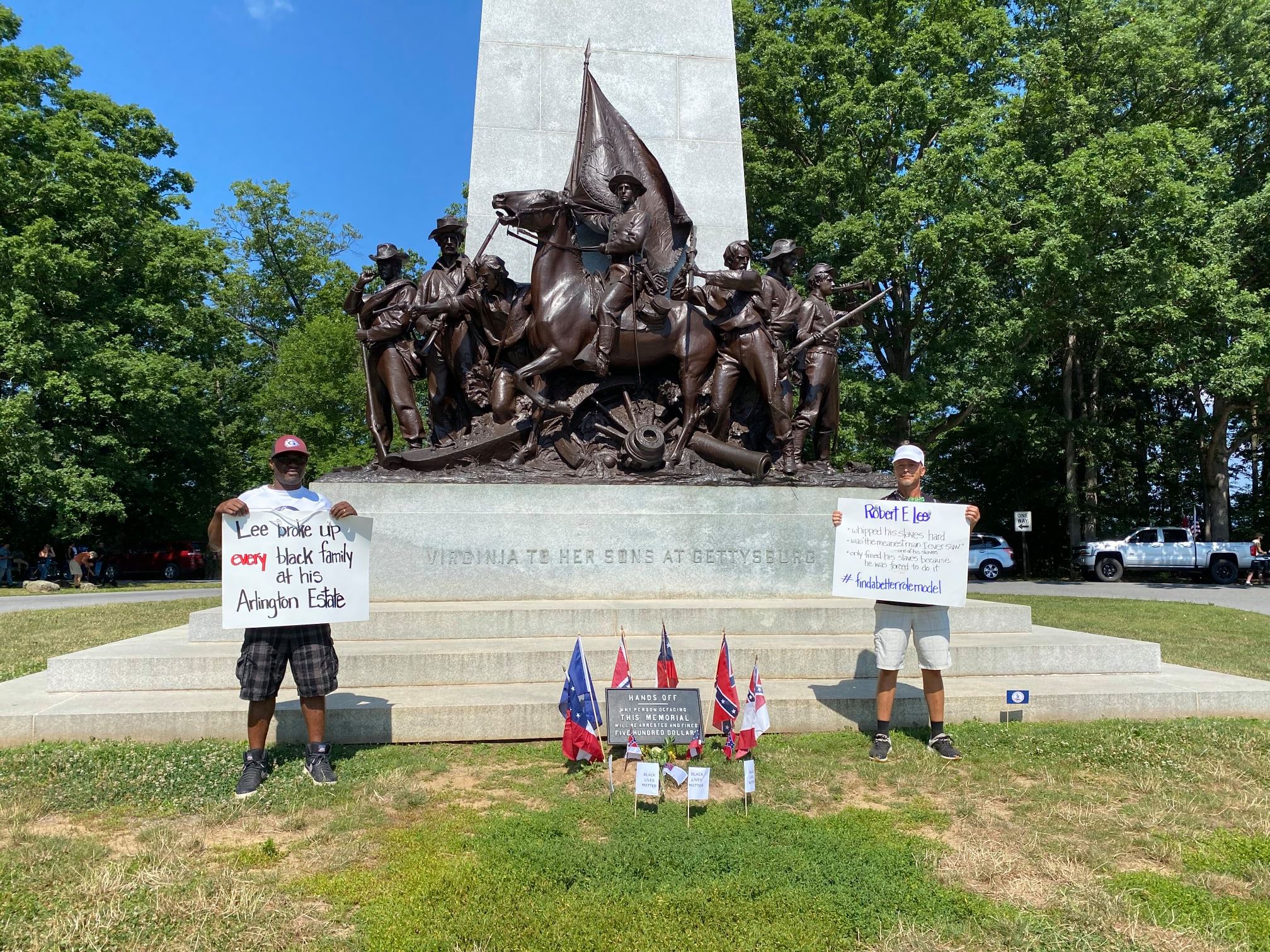 Jimmy, a friend of friends who works in a local ministry to drug and alcohol abusers, was in Gettysburg this weekend. Here, in his own words, is what happened:

Over the last 2.5 years, I have been in a group called “Be the Bridge.” The goal of the group was to have meaningful conversations about race, racism, systemic racism, the Church’s response to race, and racial reconciliation. My Dad and I (along with 2 other white guys) met with 4 Black guys each month to talk through these issues.

It left me with a strong desire to find tangible, everyday ways to fight for racial equality.

Yesterday, my Dad and I went down to the Gettysburg Battlefield Memorial to meet with the Black guys from our group. The goal was to talk about how important it is to tell the truth about many of the Confederate monuments and to keep a clear focus on the goals of the Confederacy (which was the preservation of slavery).

We held some signs at three different monuments: North Carolina, Robert E. Lee, and Mississippi. These are important statues.

The North Carolina statue was made by a staunch supporter of the KKK, Gutzon Borglum (he also did Mount Rushmore). He famously said of the KKK, “I would do anything to serve them…”

Robert E. Lee’s statue was chosen because of the “hero status” he embodies. But, Robert E. Lee was in charge of his wife’s 189 slaves, beat and whipped them, and said of slavery, “The blacks are immeasurably better off here than in Africa, morally, socially & physically. The painful discipline they are undergoing, is necessary for their instruction as a race, & I hope will prepare & lead them to better things. How long their subjugation may be necessary is known & ordered by a wise Merciful Providence.”

Mississippi was also chosen because of their article of succession. If you haven’t read it, please read it here. The opening several lines are most key.

Scott (one of the members of our group and a history professor at a local College) led most of these discussions. Scott believes that the Confederate Monuments should remain at Gettysburg, but should tell the full story of the monuments and those represented. This is the reason we were in Gettysburg yesterday. This is important and worth reiterating: We were there to tell this critical part of history, so it wouldn’t be forgotten or swept under the rug.

While we all remained civil, we were met with much hostility. At the Robert E. Lee statue, we arrived and were met by more than a dozen men in full tactical gear, holding AR-15s (none were park rangers or police). Several others were open carrying. As they surrounded us, many shouted racial slurs at Scott. These people said some of the following, “Go back to Africa!”, “Why don’t you just go back on welfare?”, “F@&k you guys,” “Have you ever picked cotton?”, “You need to forget about slavery,” “you’re one of the dumbest people,” and, to me and my Dad specifically, “You kind of white people make me sick.” There were many more things said, as well as the “N” word.

At the end of our time, about 15 bikers pulled up to our group at the Mississippi statue and began circling our group (you can see this picture below). We decided it was safest to leave. These bikers followed us out of the battlefield, through Gettysburg, all the way until we got to a police barricade. While we were sitting at a red light, the bikers motioned to some guys (who had a confederate flag in the truck) and they came over to my car and told us to “Get the f&%k out of here” and motioned with their finger.

I share this experience because I think it’s important to talk about these issues. That racism is still alive and well in our country. That the story of America has a lot of good parts and some really terrible ones, but we must tell it fully. That the church must be at the center of racial reconciliation. And we must stand up for and with those who have been marginalized and oppressed. It’s a critical part of the gospel and following Jesus.

Please don’t tell me that there is not a connection between Donald Trump’s speech at Mount Rushmore on Friday night (or at the very least his general defense of monuments since the George Floyd protests) and what happened to Jimmy and his friends at Gettysburg this weekend. In fact, Jimmy said in a private exchange that much of the hostility came from self-professed “Christians” with Trump 2020 swag.

Peter Carmichael, the Robert C. Fluhrer Professor of Civil War Studies and Director of the Civil War Institute at Gettysburg College, also visited the Gettysburg battlefield this weekend. If I understand things correctly, a member of his group carried a sign that read:”10,000 Black Slaves In Lee’s Army #BlackLivesMatter.”

Here is the poster that inflamed the passions of the militia pic.twitter.com/fSTsqbo8V4 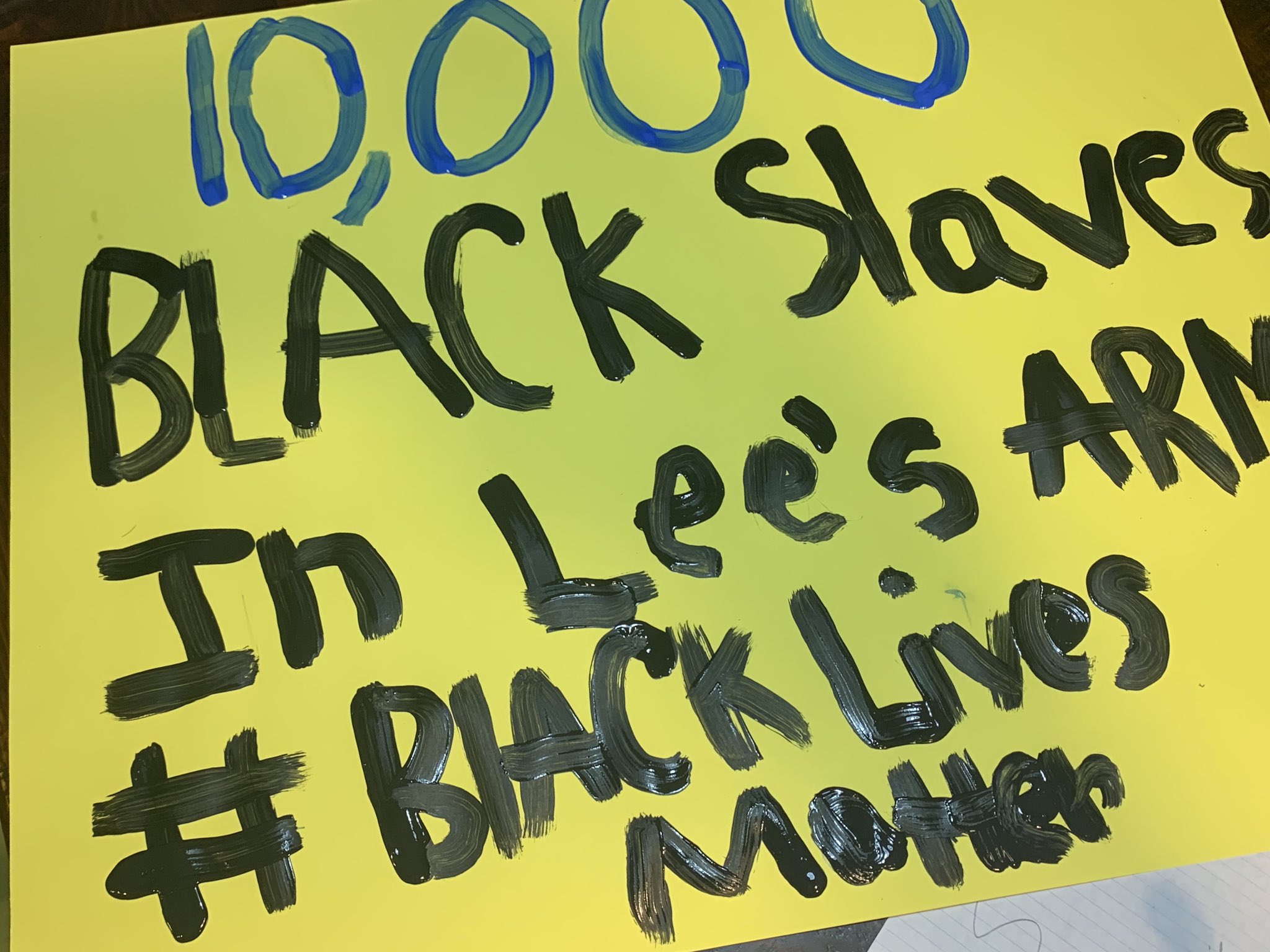 Carmichael and his group were confronted by what appears to be a white militia organization. Watch:

Here is the poster that inflamed the passions of the militia pic.twitter.com/fSTsqbo8V4

For what it’s worth, I agree with everything Scott Hancock says in this interview with CNN’s Michael Smerconish. It is worth your time:

Hancock, a professor of History and Africana Studies at Gettysburg College, is becoming an important voice right now.  Listen to our interview with him in Episode 70 of The Way of Improvement Leads Home Podcast.