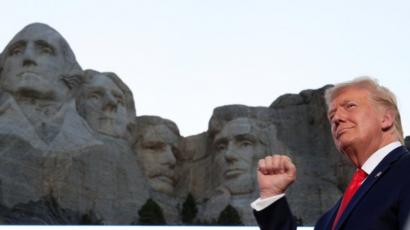 In case you missed it, Trump gave a speech at Mount Rushmore, South Dakota on the night of July 3, 2020.

2. South Dakota governor Kristi Noem introduced Trump by appealing to America’s founding ideals. She said, “Let’s not destroy history.” This is in interesting exhortation from the governor of South Dakota. What is Noem doing to fund the teaching of history in South Dakota schools? In 2015, the state dumped early American history. I am not sure if things have changed since 2015, but back then I wrote this piece.

3. Noem said that her state prides itself “on the close-knit nature of our community.” She praised all the South Dakotans for showing-up and then said that the crowd included people “from across the nation.” The crowd was packed like sardines into what looked like a small space. I saw very few masks.

5. If we want to talk about American history, let’s remember that this entire event occurred on Lakota land. And yes, Trump talked about “manifest destiny” in his speech.

6. Historian Seth Cotlar tweeted this: “I can’t stress enough how angry and reactionary this speech is, on a day that celebrates the violent, statue-destroying revolution that birthed America.” Is Cotlar right? Let’s start here. You may also want to read this book.

7. Trump tried to make the case that Democrats and protesters are trying to “erase American history.” Meanwhile, millions of Americans were ignoring his speech because they were watching a movie about the American founding on Disney+.

8. At one point Trump said, “George Washington will never be removed, abolished, or forgotten.” I am sure the good folks at Mount Vernon are on it.

9. At another point of the speech, Trump threw thousands of history teachers under the bus when he said, “Our children are taught in school to hate their own country.” The only people who would believe this are Fox News viewers or people who have never set foot in a real history classroom.

10. As I watched the speech, I could not help but wonder what Frederick Douglass would have thought about Trump invoking his name. The same goes for Martin Luther King Jr. and Muhammad Ali, not to mention Washington, Lincoln, Jefferson and Roosevelt.

11. It sounds like white supremacist Steven Miller wrote this speech. There is a reason why he is one of the few people who have been with the administration since the beginning.

Here is Ron Brownstein of The Atlantic:

The president of red America has always viewed himself as a war time president, with blue America, rather than any foreign nation, as the adversary. His speech last night may have been his most explicit in trying to convince his America that “I alone” can protect them from change https://t.co/UKzU6jSVyW

It sounds like Trump was at it again earlier this evening:

Happy July 4th “We are now in the process of defeating the radical left, the Marxists the anarchists, the agitators, the looters and people who in many instances have absolutely no clue what they are doing,” Trump said from a podium https://t.co/U2W5oBTt2h via @nbcnews

When it comes to American history, Trump is the one who has “absolutely no clue.” He doesn’t even read the teleprompter in an inspiring way.  And then he has the nerve to attack history teachers.

Here is what I wrote in Believe Me: The Evangelical Road to Donald Trump:

…the problem with Donald Trump’s use of American history goes well beyond his desire to make America great again or his regular references to some of the darker moments in our past–moments that have tended to divide Americans rather than uniting them. His approach to history also reveals his narcissism. When Trump says that he doesn’t care how “America first” was used in the 1940s, or claims to be ignorant of Nixon’s use of “law and order,” he shows his inability to understand himself as part of a larger American story. As Washington Post columnist Michael Gerson wrote in the wake of Trump’s pre-inauguration Twitter attack on civil rights icon John Lewis, a veteran of nonviolent marches who was severely beaten at Selma: “Trump seems to have no feel for, no interest in, the American history he is about to enter.” Gerson describes Trump’s behavior in this regard as the “essence of narcissism.” The columnist is right: Trump is incapable of seeing himself as part of a presidential history that is larger than himself. Not all presidents have been perfect, and others have certainly shown narcissistic tendencies; but most of them have been humbled by the office. Our best presidents thought about their four or eight  years in power with historical continuity in mind. This required them to respect the integrity of the office and the unofficial moral qualifications that come with it. Trump, however, spits in the face of this kind of historical continuity. This isn’t conservatism; it is progressive thinking at its worst. Alexis de Tocqueville once said, “Not only does democracy make men forget their ancestors, but also clouds their view of their descendants and isolates them from their contemporaries. Each man is forever thrown back on himself alone, and there is a danger that he may be shut up in the solitude of his own heart.”