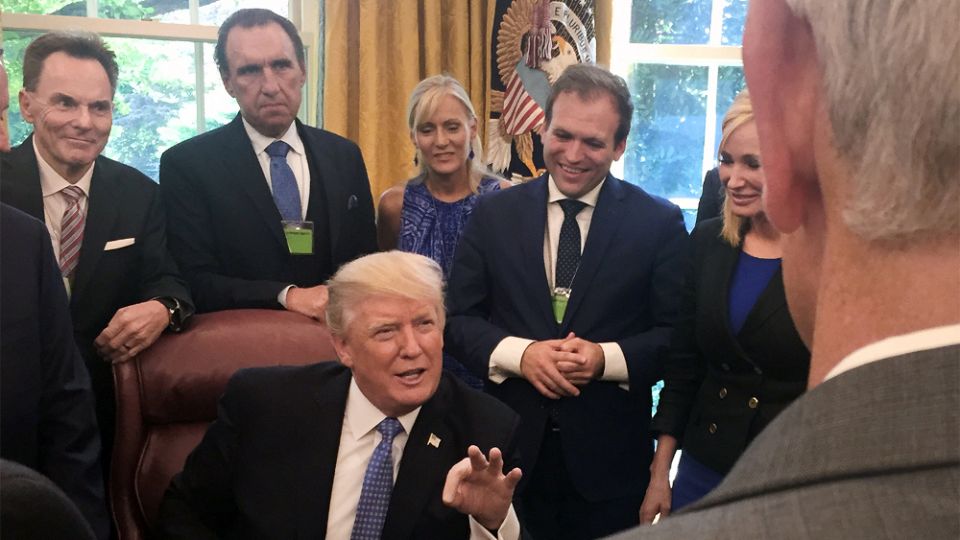 15:58ff: Perkins says that Christians “have a responsibility” to vote along “biblical guidelines” and “biblical truth.” He adds: “if you notice lately, truth is under attack.” As I said yesterday, I don’t know whether to laugh or cry when I hear Trump supporters try to defend truth. When will they speak truth to Trump? If Perkins wants to talk about biblical principles he should read about Jesus before Pilate in John 18 or Nathan’s words to King David in 1 Samuel 12. How dare Perkins sit there and say that “it is the truth that will make men free.”

And then comes the fear-mongering. Perkins implies that if evangelicals do not vote for Trump, the Democrats will come for their families, their religious liberty, and their “ability to worship God.” Listen carefully to this section. It begins around the 17:40 mark. I wonder what the earliest Christians would think if they heard Perkins say that unless America re-elects a corrupt emperor they would not be able to worship God. I wonder what the early Christian martyrs, those great heroes of the faith, would say if they heard Perkins tell the audience that “your ability to share the Gospel in word or in deed” rests on a Trump victory. As Bonhoeffer says in The Cost of the Discipleship, “When Christ calls a man, he bids him come and die.”

20:00ff: The audience does not start applauding until conservative pastor-politician E.W. Jackson tells them that Black Lives Matter is a “Marxist ploy to get people to buy into some sort of socialist, communist world view….” See what’s going on here. An African-American evangelical politician gives an audience full of white people the freedom to cheer against an anti-racist organization.

27:00ff: William Federer, probably known best in certain white evangelical circles for publishing a book of quotations from the founding fathers, implies that the CIA, Department of Justice, and FBI are planning a “coup” against Trump.

36:00ff: Tony Perkins says that if one believes human beings are created in the image of God, it will “direct all of your other policy.” He adds that the violence in the streets after George Floyd’s death was fomented by people who did not believe that women and men are created in the image of God. Was their unnecessary violence in the streets? Of course. But most of what happened in the streets after Floyd was killed had everything to do with the kind of human dignity Perkins is talking about here. How could he miss this?

41:35ff: Perkins notes the high levels of abortions among African-American women and blames the problem on Planned Parenthood. He fails to see that there is a direct connection between systemic racism, poverty, and abortion in Black communities. Of course, if one does not believe in systemic racism, then it is easy to blame Planned Parenthood and continue to ignore the structural issues of inequality and racism in our society.

1:30:00ff: Federer starts talking about the Second Great Awakening and how it led to abolitionism. This is partly true, but Frederick Douglass offers another perspective on this. When his master got saved during the Second Great Awakening, Douglass said that he became more brutal in his beatings. Why? Because he was now following the teachings of the Bible as understood by the Southern preachers who led him to God. Don’t fall for Federer’s selective history. It is a selective understanding of the past used in service of Trumpism. The 17th, 18th, and 19th South was loaded with white evangelicals who owned slaves and embraced white supremacy.

1:32:00: Perkins makes a connection between the Democratic Party and the French Revolution. He sounds like Os Guinness here.

There is a lot of other things I could comment on, but I think I will stop there.

And in other court evangelical news:

The Falkirk Center at Liberty University is tweeting a quote from Jerry Falwell Sr.

As Christians, we must re-engage in politics, or we will be controlled by those who are. The radical left wants to destroy western civilization and America’s foundations, which were born from the Judeo-Christian ethic and tradition. We cannot sit idly by and let them prevail. pic.twitter.com/Hhol2P0BmM

In case you can’t read the quote:

The idea that religion and politics don’t mix was invented by the Devil to keep Christians from running their own country. If there is any place in the world we need Christianity, it’s in Washington. And that’s why preachers long since need to get over that intimidation forced upon us by liberals, that if we mention anything about politics, we are degrading our ministry. —Jerry Falwell Jr.

I will counter with a quote from C.S. Lewis in The Screwtape Letters.  Screwtape (Satan) is giving advice to his young minion Wormwood:

Let him begin by treating the Patriotism…as part of his religion. Then let him, under the influence of partisan spirit, come to regard it as the most important. Then quietly and gradually nurse him on to the state at which the religion becomes merely a part of the “cause,” in which Christianity is valued chiefly because of the excellent arguments it can produce…Once [he’s] made the world an end, and faith a means, you have almost won your man, and it makes very little difference what kind of worldly end he is pursuing.

Samuel Rodriguez is holding a 4th of July prayer meeting at his church. The meeting is built upon his “prophetic decree” that America is “one nation, under guide, indivisible with liberty and justice for all.” I wonder if he would have received the same prophetic decree prior to 1954, the year the words “under God” were added to the pledge.

James Robison tweets about the founders as if slavery did not exist.

Our nation’s founders acknowledged & exalted a benevolent and righteous God and affirmed the worth and dignity of humanity, unlike the brand of liberty exalted by some today which rejects the values on which this nation was built. The absolute truth is: ideas have consequences.

Ralph Reed seems to think that Donald Trump’s “sins” are only sins of the “past.”

Not condemning someone with a sinful or imperfect past. “Let he who is without sin cast the first stone.” John 8:7 https://t.co/OR2nueN5Rz

Robert Jeffress is ready to prove it:

Today on Pathway to Victory, I prove that “America is a Christian Nation.”

Tune in on TBN at 7am and Hillsong Channel at 7:30am CT. https://t.co/MIgr1D74JJ pic.twitter.com/HUf3GmypNq