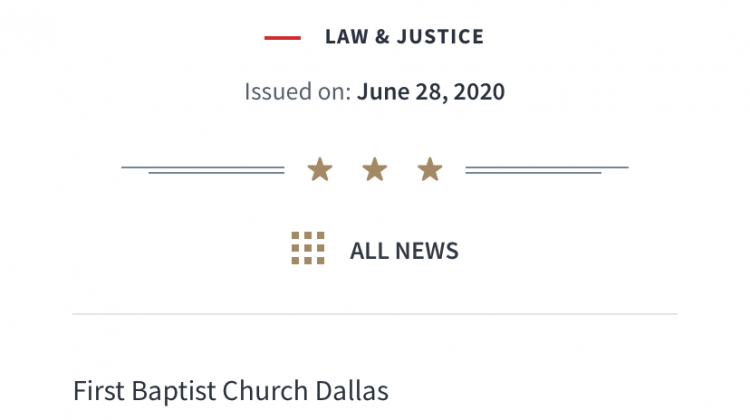 In case you don’t have time to watch, allow me to give you a rundown:

9:44: Robert Jeffress and Mike Pence enter the room wearing masks. He stops at the entry to the sanctuary and accepts a standing ovation from the audience.

10:20: The band and orchestra play a patriotic medley of songs, including “This Land is Your Land” (no reference is made to the radicalism of the song :-)) and “It’s a Grand Old Flag.”

13:00: The choir plays “America the Beautiful.” A voice comes across the speakers saying “Let the words of patriots remind us of our blessings. They warn us of the consequences of taking liberty for granted.”

17:00: The congregation and choir sings the Star-Spangled Banner. Future historians who study this service will not miss the fact that today’s singing of the national anthem has nothing to do with Christianity and everything to do with our current debates over whether athletes and others should “take a knee” during  its playing.

19:00: The master of ceremonies says, “This morning we come to celebrate the freedom that we have in America through Christ Jesus.” Think about that statement for a moment. Is he saying that Jesus died so Americans could be free? Perhaps it was just a mistake.

19:15: The orchestra plays the theme songs of all four major branches of the U.S. Armed Forces. Veterans in the audience are invited to stand and wave their American flags when the anthem of the branch in which they served is played. This is one of the most revealing parts of the service. Even if such patriotic celebrations were appropriate during a Sunday morning service, Independence Day is not a military holiday–we have Memorial Day and Veterans Day for that. Independence Day is a time to remember our shared values and the times we have fallen short of those values. It is a time to remember the story of America–the triumphs and the failures. Yes, we can honor soldiers, but we must also remember reformers–Garrison, Anthony, Stanton, Stowe, Dix, Addams, Debs, Du Bois, Day, Fuller, King, Mott, Nation, Parks, Tubman, Steffens, Sinclair, Gilman, Lewis, Robeson, Guthrie, Baker, Robinson, Ali, the Grimke sisters, Weld, Mann, and many, many others. I wonder what Frederick Douglass, the author of “What to a Slave is the Fourth of July?,” would have thought of this service.

24:50: All new attendees get a copy of Jeffress’s book Praying for America.

25:30: Jeffress takes the platform. He informs us that Ben Carson, Greg Abbott and John Cornyn are in attendance. They get a standing ovation.

28:00: Ben Carson gets up to speak. He thanks Jeffress for his work as a court evangelical and the “wonderful commentaries that make sense that you give on the news.” Carson then starts talking about Alexis De Tocqueville’s early 19th-century visit to America and the role the churches played in carrying forth  the ideals of the American Revolution. Carson does not mention that he is standing in a pulpit where ministers like W.A. Criswell preached that racial segregation is biblical.

After he references Tocqeuville, Carson moves easily into a bunch of Christian nationalist lingo.  Following this, he starts making indirect references to monuments: “Do we want to bury our history, do we want to bury our heritage, or do we want to learn from it?” Again, the crowd applauds. Carson adds, “we cannot succumb to the purveyors of division and hatred.” Yes, this is an African-American member of Donald Trump’s cabinet talking about how we shouldn’t fall prey to disunity. Carson works for a president who two hours earlier retweeted a video of a guy yelling “white power.”

35:00: The scripture for this day of patriotism is Psalm 33:6-12: It concludes: “Blessed is the nation whose God is the Lord, The people whom He has chosen for His own inheritance.” This is a perfect verse for what Jeffress wants to accomplish in this service. A promise to Israel is used as a promise to the United States. America is God’s new chosen people.

35:30ff: Praise songs. Jeffress wants everyone to know that this isn’t just a patriotic service. That would be too secular. No, this is a service that brings spiritual faith and patriotism into a syncretic mix of Christian nationalism.

44:40: The choir sings a rousing rendition of the Battle Hymn of the Republic.

50:00: Jeffress gives a shout-out to Donald Trump. He calls him “the most resilient, the most courageous, the most faith-friendly president in the history of America.” Trump gets a standing ovation. This idolatry is not unlike what happened in January at the Evangelicals for Trump rally in Miami, an event that prompted this piece. (Compare Jeffress’s service with this morning’s message from Dru Dodson, an evangelical pastor in Arkansas  and a former classmate of mine at Trinity Evangelical Divinity School).

Jeffress introduces Pence. He then claims that by choosing Pence as his vice-president, Trump followed the example of Abraham Lincoln. No, I’m sorry Bob, Trump has not assembled a “team of rivals.” More like a team of flatterers.

He then moves into a Trump campaign speech. Finally, he encourages Pence to run for president in 2024. Everyone stands-up and gives Pence another standing ovation. Then they start chanting USA! USA! USA!” This is idolatry. It is not Christianity.

57:50: Pence wastes no time mixing the Bible and American ideals. He starts with Galatians 5:1 “It is for freedom that Christ set us free….” This was a very popular verse among revolutionary-era patriotic clergy–men who also used their pulpits to twist scripture to make it fit their political agenda. Galatians 5:1 is not about political freedom. Read it.

58:45: Pence says that Trump “has been a great champion of everything we are celebrating here this morning.”

59:54: Pence says that since the “cornerstone was laid” at the founding of First Baptist Church in Dallas, the people have understood “that the foundation of America is freedom. And the foundation of freedom, is faith.” See my remarks above about the real history of this church. Pence may want to be careful using the word “freedom” in conjunction with First Baptist–Dallas.

1:00:00:  Pence’s speech is full of applause lines, especially when he mentions Trump’s name. This is a political rally on the Lord’s Day. It is actually worse, much worse, than the Miami event. Here is what I wrote about that day:

I am used to this kind of thing from Trump, but I was stunned when I witnessed evangelical Christians — those who identify with the “good news” of Jesus Christ —raising their hands in a posture of worship as Trump talked about socialism and gun rights.

I watched my fellow evangelicals rising to their feet and pumping their fists when Trump said he would win reelection in 2020.

Trump spent the evening mocking his enemies, trafficking in half-truths in order to instill fear in people whom God commands to “fear not,” and proving that he is incapable of expressing anything close to Christian humility.

His evangelical supporters loved every minute of it. That night, Christians who claim to be citizens of the Kingdom of God went to church, cheered the depraved words of a president and warmly embraced his offer of political power. Such a display by evangelicals is unprecedented in American history.

I usually get angry when members of my tribe worship at the feet of Trump. This time, I just felt sad.

1:12:00ff: Pence offers a David Barton-inspired history lesson. This is the stuff I tried to correct in Was America Founded as a Christian Nation?: A Historical Introduction.

1:19:31: Like he is prone to do, Pence ends by mixing 2 Chronicles 7:14 with American history. “If his people are called by his name will humble themselves and pray, he will do what he has always done through the long and storied history of this nation. He’ll here from heaven and he’ll heal this land.” Another huge ovation.

1:23:00 Pence ends by telling the story of his conversion at a music festival at Asbury Theological Seminary. It is moving. I have no doubt that Pence is describing a very real spiritual experience. But in this speech he is taking what seems like a work of God in his life and using it in the context of a political rally. Most evangelicals would say a hearty “amen” to most of Pence’s personal testimony, but his words are not spoken in a vacuum. They are uttered in the context of his previous remarks in this service. They are spoken in the context of the Donald Trump administration, a corrupt presidency that he has helped to enable.

1:27:00: Jeffress comes back to invite people to accept Jesus as Savior. Viewers online can click on a button that says, “I prayed the prayer with Dr. Jeffress.” Later in the day, Jeffress tweeted:

Just heard that 350,000 watched our service live online to hear @VP @Mike_Pence. Over 1,000 indicated they prayed to trust in Christ as their Savior at end of service. God worked today! pic.twitter.com/m3HUXkXxxn

Did these men and women commit to Christ or Christian nationalism? If my mail is any indication, some of my readers will be upset that I just asked this question. But it needs to be asked.

1:36:00: The service ends with the waving of American flags and the singing of “God Bless America.”

1:38:00: As the people exit, the orchestra plays more patriotic music and the audience is encourage to keep waving flags.

The fusion of God and country has been around since the birth of the republic, but it is hard to find a more blatant manifestation of this convergence than what we saw this morning in Dallas.

The White House is calling Pence’s visit a “rally.” That says it all. First Baptist Church–Dallas let the Trump administration use the church to hold a campaign rally on the Lord’s Day. In case it gets changed, the title of this post at Whitehouse.gov is “Remarks by Vice President Pence at the Celebrate Freedom Rally–Dallas, Texas.”