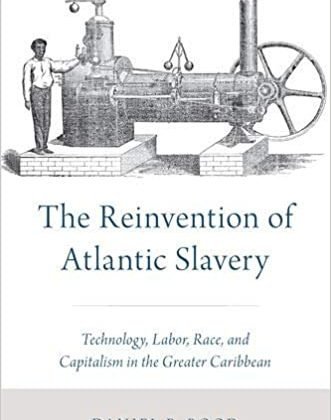 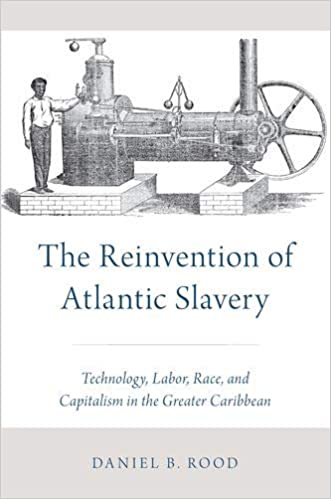 Daniel B. Rood is Associate Professor of History at the University of Georgia. This interview is based on his book, The Reinvention of Atlantic Slavery: Technology, Labor, Race, and Capitalism in the Great Caribbean (Oxford University Press, 2020).

JF: What led you to write The Reinvention of Atlantic Slavery?

DR: Arguments over the role of enslaved people in the growth of modern western capitalism had always intrigued and inspired me, but I found contemporary scholars often lapsed into abstract phrases when actually making the case.  Sugar plantations were “industrial,” planters were “rational” and “innovative,” there were railroads and machines in slave societies, etc., etc. I felt like, in depending on these loaded terms, there was a bit of a black box effect going on. What does “industrial” mean, exactly?  What is that machine in the artist’s rendering of a plantation?  What is it doing there?  Why do we care? So, I wanted to open that box back up and re-build arguments about slavery and capitalism from the ground up, i.e. from examining and reflecting upon the micro-processes of labor, technology, and ecology on plantations and in workshops, factories, warehouses, transport systems, and markets.

JF: In two sentences, what is the argument of The Reinvention of Atlantic Slavery?

DR: In an age of industrial growth and expanding antislavery movements, ambitious planters in the Upper US South, Cuba, and Brazil forged a new set of relationships with one another to sidestep the financial dominance of Great Britain and the northeastern United States. Hiring a transnational group of chemists, engineers, and other “plantation experts,” they sought to adapt the technologies of the Industrial Revolution to suit “tropical” needs and maintain profitability, while depending on the know-how of slaves alongside whom they worked.

JF: Why do we need to read The Reinvention of Atlantic Slavery?

DR: First, my book shows that a cotton nexus connecting the Deep South to Lancashire mills and Liverpool banks was far from the only story to tell about antebellum slavery and capitalism. I also demonstrate that sustained attention to how commodities are made and moved around can generate broader insights into the histories of slavery, the African diaspora, and race. Among other things, the book shows that changes in racist ideology were profoundly entangled with changes in capitalist productive technologies.  Modern “white” commodities like sugar and flour emerged together with transformed “white” and “black” racial categories in the same mid-19th century Atlantic World matrix. It is a flashy thing to assert, but I work hard to substantiate it. I think the journey is worthwhile for the reader, whether or not they are always convinced.

DR: I’m not sure I ever did. I was an English major as an undergrad. I only remember taking one history class; I mostly remember reading lots of Keats and Wordsworth.  A faculty mentor encouraged me to do American Studies at NYU, which was a deeply generative, if sometimes cringe-inducing, time for me. That was when I first spent a lot of time with Marx’s writings, and where I was introduced to scholars like Eric Williams, CLR James, and Sidney Mintz who centered the African Diaspora in the making of the modern world. I was fascinated by the questions they were asking, and wanted to explore more.  Becoming a historian, and becoming an Americanist, happened accidentally on the way.

DR: I am currently writing a book on the history of plantations from 1500-present. I have also been working sporadically over the past few years on a micro-history of post-emancipation black landowners in and around Athens, Georgia. Finally, I plan to write a history of southern forests from pre-Columbian times to the present. After that it’s back to Keats and Wordsworth.