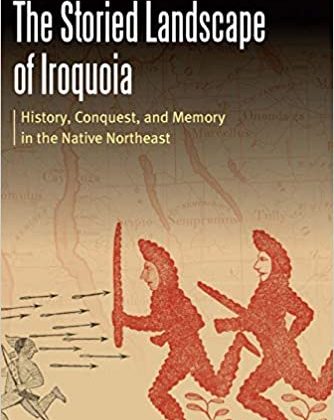 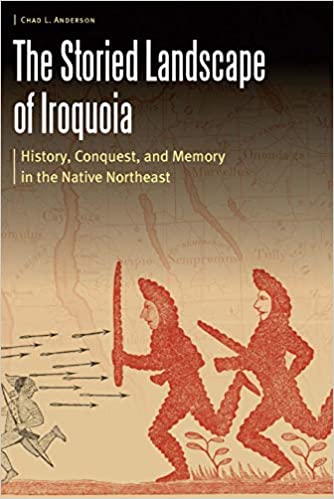 Chad Anderson is Visiting Assistant Professor of History at Hartwick College. This interview is based on his new book, The Storied Landscape of Iroquoia: History, Conquest, and Memory in the Native Northeast (University of Nebraska Press, 2020).

JF: What led you to write The Storied Landscape of the Iroquoia?

CA: I started with the vague and lofty goal of wanting to write a different kind of book that could approach a familiar topic from a fresh perspective. My research began when I was reading accounts of Euro-American settlers in central New York, who traveled on trails created by the Haudenosaunee (the Iroquois Six Nations), sought clearings where the Haudenosaunee had farmed, and even commented on their crops—at the same time that ideas that Indians had done nothing to shape the land circulated in popular culture. Finding a contradiction is a great way to begin research because it demands an explanation and indicates that there is a more complicated story to tell. That piece of the puzzle is where I started because I knew that the blank canvas Euro-Americans imagined the “wilderness” to be wasn’t so blank. From there, I began to put together the big picture spanning the eighteenth to nineteenth centuries. I found that Iroquoia (the homelands of the Haudenosaunee) was full of fascinating places and stories: ancient ruins, mysterious monuments, important villages, and so forth. I wanted to know how these sites continued to influence American culture, both Euro-American and Haudenosaunee, into the nineteenth century.

JF: In two sentences, what is the argument of The Storied Landscape  of the Iroquoia?

CA: The Haudenosaunee had shaped one of the most geographically significant homelands in North America, and for centuries layers of history had been written on their landscape. Central to the Euro-American conquest of Iroquoia was a significant, but ultimately contested and incomplete erasure of that Native imprint on the land.

JF: Why do we need to read The Storied Landscape of the Iroquoia?

CA: If we think of American history as a story, I believe historians have put forth a good effort to restore Native Americans to the plot, but the setting—and therefore important aspects of the characters’ lives—is often missing. This oversight is all-the-more striking when you recognize how much of North America remained Indian Country for hundreds of years after European colonization began. Nobody aimlessly wandered around early America. It was a well-connected place full of settlements where trade, diplomacy, and all sorts of exchanges happened. There was a significant Native American built environment, but that landscape was more than a collection of wood homes and farm fields. Memories connected to important places on that land. Ranging from ancient myths to recent events, that history created meaningful homelands. For the Haudenosaunee, like many Native nations in the East, the emergence of an aggressively expansionist American republic meant a dramatic reduction in their territory, which included many of those important places. However, a fundamental principle of historical scholarship is continuity and change. Even as Euro-Americans eventually conquered and re-settled most of Iroquoia, they could not entirely erase the land’s indigenous history and begin the country anew on a blank slate. And so, the story of that contested conquest and reinvention is really at the heart of the nation’s founding—a new republic built on North America’s old world. As such, I hope that readers with a wide-variety of interests will find something worth considering in the book.

CA: I always had interest in becoming a historian, but actually went to college as a business major because it seemed so much more practical. At the University of Wisconsin-Eau Claire, I ended up meeting and working with some excellent mentors from both the history and philosophy and religious studies departments. Those classes were when I really felt like I was doing what you were supposed to be doing at a university—examining complicated narratives, developing logical arguments, and so forth. I think back on my journey quite often, as I watch the decline (perhaps collapse) of history in higher education and wonder what experiences we want for our future undergraduates, who also want an education that is practical and meaningful. As for American history, I became interested in the early American republic because its people and dilemmas seemed both distant—the past as a “foreign country” that historians imagine exploring—and modern, with understandable and still relevant concerns. To a significant degree, I believe that my initial fascination informs my current work, which narrates the stories of people living in the 1820s and 1830s (for example, the Tuscarora historian David Cusick, the Prophet Joseph Smith), who looked to an ancient landscape in the midst of a modernizing America.

CA: “The Great Wolf Massacre,” a tale of hardship, scandal, the memory of America’s founding, and, perhaps, wolves.