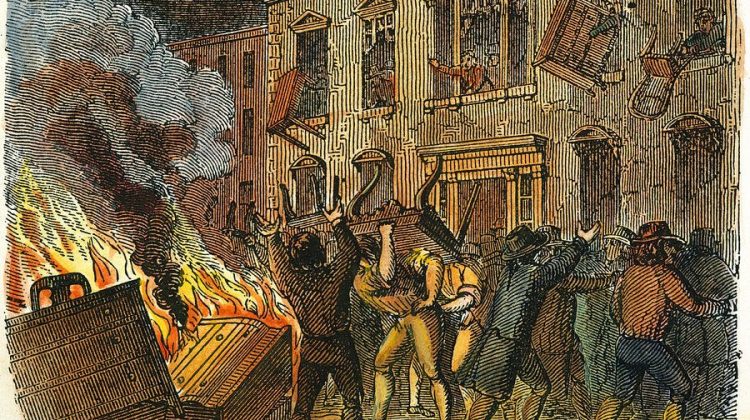 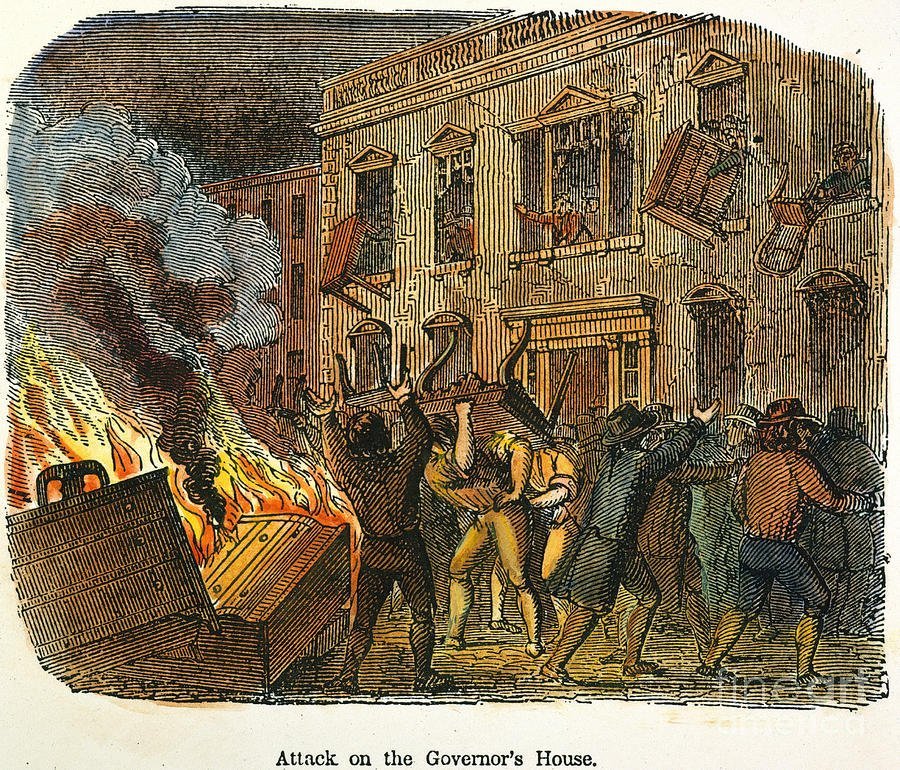 Everyone knows that the American Revolution was born through violent protest. Yes, the colonies fought a war that secured their liberty, but they also engaged in civilian violence in major British-American cities well before the outbreak of war.

Here is Peter Oliver, a Boston judge, describing the situation in Boston during the August 1765 Stamp Act riots. It comes from his 1781 book Origin and Progress of the American Rebellion:

The Mob, also, on the same Evening, broke into the Office of the Register of the Admiralty & did considerable Damage there; but were prevented from an utter Destruction of it. They also sought after the Custom House Officers; but they secreted themselves– these are some of the blessed Effects of smuggling. And so abandoned from all Virtue were the Minds of the People of Boston, that when the Kings Attorney examined many of them, on Oath, who were Spectators of the Scene & knew the Actors [participants], yet they exculpated them before a Grand Jury; & others, who were Men of Reputation, avoided giving any Evidence thro’ Fear of the like Fate. Such was the Reign of Anarchy in Boston, & such the very awkward Situation in which every Friend to Government stood. Mr. Otis & his mirmy-dons, the Smugglers & the black Regiment, had instilled into the Canaille that Mr. Hutchinson had promoted the Stamp Act; whereas, on the Contrary, he not only had drawn up the decent Memorial of the Massachusetts Assembly, but, previous to it, he had repeatedly wrote to his Friends in England to ward it off, by showing the Inexpedience of it & the Disadvantages that would accrue from it to the English Nation, but it was in vain to struggle against the Law of Otis, & the Gospel of his black Regiment. That worthy Man must be a Victim; Mr. Otis said so, & it was done.

Notice the destruction of property. Notice the corrupt politicians who protected the lawbreakers. Also notice that members of the Boston clergy–the “black Regiment”–fueled the mobs. (I am assuming that the “black regiment” mentioned in Oliver’s account was indeed a reference to the ministers). Today, the Christian Right activists who use the past to justify their present-day political policies have used the phrase “black-robed regiment” to describe Oliver’s “black regiment.” Pseudo-historian David Barton believes we need a revival of this so-called “black-robed regiment” in order to restore America to its Christian foundation. So if you want to support a group of evangelical ministers who endorsed the destruction of property, violence, and looting in the name of God and liberty, you can join here. (Also check-out J.L. Bell’s take on the “black-robed regiment.” He thinks Barton made it all up).

Such was the Frenzy of Anarchy that every Man was jealous [suspicious] of his Neighbor & seemed to wait for his Turn of Destruction; & such was the political Enthusiasm that the Minds of the most pious Men seemed to be wholly absorbed in the Temper of Riot. One Clergyman of Boston, in particular, who seemed to be devoted to an Abstraction from the World, and had gone through an Existence of near 70 Years, reputedly free from both original Sin & actual Transgression, yet by the perpetual buzzing of Incendiaries at his Ear, being inquired of, as an Oracle, what ought to be done by the People? He uttered his Decision with this laconic Answer: “Fight up to your Knees in Blood.” Never could the exclamation of Tantaene animis celestibus irae (“do the heavenly minds have such great anger”) be more just than on this Occasion.

Once again, we see the Boston clergy endorsing the violence. More from Oliver:

The Secretary of the Province also, who was appointed a Stamp Master, was attacked, and his House much damaged. He was carried to the Tree of Liberty by the Mob & a Justice of the Peace provided to swear him; & there he was obliged, on pain of Death, to take an Oath to resign his Office. This Tree stood in the Town & was consecrated as an Idol for the Mob to worship; it was properly the Tree ordeal, where those whom the Rioters pitched upon as State delinquents, were carried to for Trial, or brought to as the Test of political Orthodoxy. It flourished until the British Troops possessed Boston, when it was desecrated by being cut down & carried to the Fire ordeal to warm the natural Body. It would have been lucky for the Soldiery had it continued to give a natural Warmth as long as it had communicated its political Heat; they then would not have suffered so much by the Severity of a cold Season.

Early on Wednesday Morning last, the Effigy of a Genltemen sustaining a very unpopular office, viz. that of St___p Master, was found hanging on a Tree in the most public Part of the Town, together with a Boot, wherein was concealed a young Imp of the D___l [Devil] represented as peeping out of the Top.–On the Breast of the Effigy was a Label, in Praise of Liberty, and denouncing Vengeance on the Subvertors of it–and underneath was the following Words, HE THAT TAKES THIS DOWN IS AN ENEMY TO HIS COUNTRY–The Owner of the Tree finding a Crowd of People to assemble, tho’ at 5 o’clock in the Morning, endeavoured to take it down; but being advis’d to the contrary by the Populace, lest it should occasion the demolition of his Windows, if nothing worse, desisted from the Attempt.

The Diversion it occasioned among a Multitude of Spectators, who continually assembled the whole Day, is surprising; not a Peasant was suffered to pass down to the Market, let him have what he would for Sale, ’till he had stop’d and got his Articles stamp’d by the Effigy. Toward’s dark some Thousands repaired to the said Place of Rendezvous, and having been taken down the Pageantry [the effigy], the proceeded with it along the Main Street to the Town-House, thro’ which they carried it ,and continued their Rout thro’ Kilby-Street to Oliver’s Dock, where there was a new Brick Building just finished; and they, imagining it to be designed for a Stamp-Office, instantly set about demolishing it, which they thoroughly effected in about half an Hour.

This passage shows a peaceful protest that quickly becomes violent and destructive.

In the mean Time the High-Sheriff, &c. &c., being apprehensive that the Person of the then Stamp-Master, and his Family, might be in Danger from the Tumult, went and advised them to evacuate the House, which they had scarcely done, making their Retreat across the Gardens, &c. before the Multitude approach’d Fort-Hill, continuous thereto, in order to burn the Effigy, together with the Timber and other Woodwork of the House they had demolish’d. After setting Fire to the Combustibles, they proceeded to break open the Stables, Coach-Houses, &c. and were actually increasing the Bonfire with a Coach, Booby Hutch, Chaise, &c. but were dissuaded going so far by a Number of Spectators present, tho’ they burnt the Coach Doors, Cushions, &c. But it seems, not having yet completed their Purpose, they set about pulling down a Range of Fence upwards of 15 Feet high which enclos’d the bottom of the Garden, into which having enter’d, they stripped the Trees of the Fruit, despoiled some of them by breaking off the Limbs, demolished the Summer House, broke the Windows in the Rear Part of the House, enter’d the same, went down the Cellars, and help’d themselves to the Liquor which they found there in the Silver Plate that the House afforded, none of which however was missing the next Day, altho’ scatter’d over various Parts of the House.  They then destroyed Part of the Furniture, among which was a Looking Glass said to be the largest in North-America, with two others, &c.

Here is a taste of an August 30, 1765 letter from Thomas Hutchinson to Richard Jackson. Hutchinson was the Lieutenant Governor of the colony of Massachusetts:

In the evening whilst I was at supper & my children round me somebody ran in & said the mob were coming. I directed my children to fly to a secure place & shut up my house as I had done before intending not to quit it but my eldest daughter repented her leaving me & hastened back & protested she would not quit the house unless I did. I could not stand against this and withdrew with her to a neighboring house where I had been but a few minutes before the hellish crew fell upon my house with the rage of devils & in a moment with axes split down the door & entered. My son being in the great entry heard them cry damn him he is upstairs we’ll have him. Some ran immediately as high as the top of the house to be employed there. Messages soon came from one after another to the house where I was to inform me the mob were coming in pursuit of me and I was obliged to retire through yards & gardens to a house more remote where I remained until 4 o’clock by which time one of the best finished houses in the province had nothing remaining but the bare walls & floors. Not contented with tearing off the wainscot & hangings & splitting the doors to pieces they beat down the cupola or lanthern and they began to take the slate & boards from the roof & were prevented only by the approaching daylight from a total demolition of the building. The garden fence was laid flat & all my trees  & c. broke down to the ground. Such ruins were never seen in America. Besides my plate & family pictures, household furniture of every kind, my own childrens’ and servants’ apparel they carried off about L900 sterling in money & emptied the house of everything whatsoever except a part of the kitchen furniture not leaving a single book or paper in it & have scattered or destroyed all the manuscripts & other papers I had been collecting for 30 years together besides a great number of public papers in my custody.