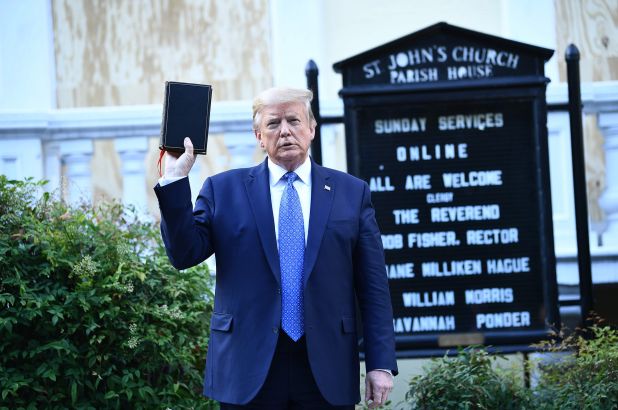 When Trump went to St. John’s Church on Monday he held-up a Bible. He did not read it. He did not even open it. We still don’t know exactly why he did this, but we have some pretty good ideas. My view is that Trump was holding up the Bible for political reasons. He wanted to show that God endorsed the message he had just delivered about “law and order” in the White House Rose Garden. He believed that such a public display would fire-up his base–a group of white evangelicals who get very, very excited whenever the president gets close to a Bible. Why do they get so excited? This is a story I unpacked extensively in Believe Me: The Evangelical Road to Donald Trump.

But Trump waved the Bible as a kind of talisman–a material object waved as a symbol of spiritual and political (the two are often inseparable in the minds of many white evangelicals) power. The words of the scriptures were not important. They never have been to Donald Trump:

I don’t think Trump really believes that the Bible has any spiritual power in the way that his evangelical base believes that it does. (Think about it–have you ever seen Trump reading from a Bible?) But he does believe the Bible, as a material object, is a book enchanted with magic political powers. On Monday he used this magical book as a prop in a public performance of Christian nationalism. (On Bible “performances” see Seth Perry’s excellent book Bible Culture & Authority in the Early United States).

And now on to the American Bible Society.

Whitney Kuniholm, senior vice-president of the American Bible Society in Philadelphia, has issued an official statement about Donald Trump’s use of the Bible during his St. John’s Church photo-op. Here is Kate Shellnut at Christianity Today:

In this time of pandemic fear and social isolation, in this time of racial injustice and senseless violence, in this time of economic uncertainty and generational pain, we should be careful not to use the Bible as a political symbol, one more prop in a noisy news cycle,” said Whitney T. Kuniholm, senior vice president of the American Bible Society.

“Because, more than ever, we need to hear what’s true. ‘Let justice roll on like a river, righteousness like a never-failing stream!’ (Amos 5:24 NIV). ‘Yea, though I walk through the valley of the shadow of death, I will fear no evil: for thou art with me…’ (Ps. 23:4 KJV).”

What should we make of this statement?

First, it is worth noting that the American Bible Society would never have made such a statement prior to the 1990s. Until recently, the Society did not interpret the Bible. (More on this below). If Christians couldn’t decide whether the Bible should be employed to promote social justice or uphold law and order, the American Bible Society stayed out of the debate. The Society did not even take a stand against slavery in the Civil War. Southern slaveholders needed Bibles too. It also tried to rise above the sticky doctrinal

Society publications were fond of using the phrase “the Bible doing its work” to describe the effect the book had on sinners and potential converts. These publications are filled with stories of Bibles that would not burn when unbelievers tried to destroy them by fire and Civil War soldiers who claimed that a pocket Bible stopped enemy bullets. Even if the Bible was never read or opened, it was enchanted and could thus serve a divine purpose.

If Trump’s stunt at St. John’s Church occurred in the 19th-century, I have no doubt that the Society’s magazine would print testimonial letters written to the “Bible House” in New York City by people who had a spiritual experience from witnessing the Bible brandished by such an important person in such an important setting. Again, the agents of the America Bible Society got the book in the hands of the right people and then simply let the Bible do its work. The correspondence proved it.

Second, it is worth noting that the Society’s statement about Trump’s visit to St. John’s church suggests that the Bible should not be used as a “political symbol.” On one level, Whitney Kuniholm’s statement is consistent with the history of the organization. The American Bible Society has never endorsed any political candidates or entered into specific political debates.

Here is more from The Bible Cause:

The ABS never let its constituency forget that it was the American Bible Society. The Society never operated from the fringes of American life. While it has been willing to work with any Christian body interested in promoting the Bible, the ABS has always gravitated toward the particular expression of Christianity that its board and staff believed to be the moral guardians of America’s status as a Christian nation. This was rather easy in the nineteenth century, a time when evangelical religion held cultural power. But in the twentieth century, particularly after the Fundamentalst-Modernist controversies of the 1920s, this required more of a conscious decision. As we will see, for most of the twentieth the ABS made its peace with the Ecumenical Movement as embodied  in the National Council of Churches, but with American presidents, businessmen, and celebrities who were associated with these historic denominations. Since the 1990s, as the power of mainline Protestantism to shape the culture waned, the ABS cast its lot again with evangelicalism.

The evangelicals who cheered Trump’s use of the Bible at St. John’s Church believe that he was doing his part to bring the sacred text to the heart of American political and cultural life. He was not only proclaiming the divine authority of the Bible, but he was also affirming the idea that the United States is a Christian nation. By merely displaying the unopened Bible before the cameras, Trump was telling the world that the nation’s most cherished values–in this case law and order–stem from this book. The ABS–for good or for bad–has always embraced a similar view and they have struggled in recent decades to adapt such a view to a more diverse and pluralistic society.

Third, if recent history is any indication, the American Bible Society should actually celebrate, not condemn, Trump’s use of the Bible. Let me explain.

For much of its history, the American Bible Society measured success in terms of how many Bibles it was able to send around the world. Insiders called this the “tonnage” approach to Bible work. One of the criticisms of the tonnage approach was that it was impossible to gauge the spiritual impact of the scriptures on people’s lives apart from the anecdotes and stories told through the correspondence of colporteurs, agents, and constituents. It was one thing to spend millions of dollars producing and distributing Bibles, Testaments, and scripture portions, and quite another thing to know if those scriptures were simply placed on a shelf, treated like a family talisman, or actually read. While the Society had always accepted this as a valid critique of its organization, there was never any serious attempt to try to respond to it apart from something akin to the mantra “let the Bible do its work.” Ship Bibles and let God do the rest.

This all began to change when the American Bible Society moved from a mainline Protestant organization to an evangelical one. I wrote about this shift, which occurred in the 1990s, in the final chapter of my book The Bible Cause, but I also published a shorter version of the story here. Under the leadership of President and CEO Eugene Habecker, the Society stopped measuring success by tonnage and started measuring success through something that was eventually called “scripture engagement.” (As noted above, they also did away with the “no note or comment” policy).

So needless to say, it surprised me that the American Bible Society came out so strongly against Trump’s photo-op. Why aren’t they pleased that Trump has the entire nation talking about the Bible? The Society could not have asked for a better “scripture engagement” moment. In fact, Christianity Today is reporting that the Society is taking the opportunity to give away free Bibles.

When Trump stood before St. John’s Church’s and lifted a copy of the Bible, he was proclaiming that the law and order of the United States was based on the Old and New Testament scriptures and that he would be God’s agent to advance such a view of American life. Millions of people around the world were “engaged” with the Bible on Monday. The folks at American Bible Society may not like Trump’s style, but they have been endorsing this kind of thing since 1816.