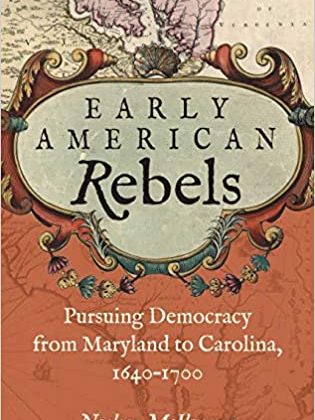 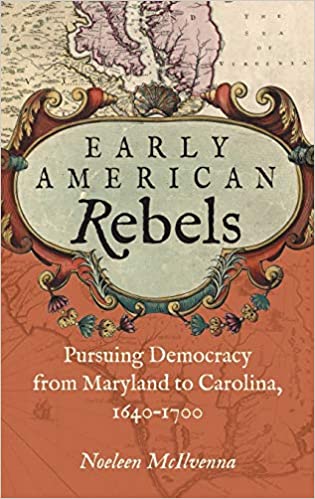 Noeleen McIlvenna is Professor of History at Wright State University. This interview is based on her new book, Early American Rebels: Pursuing Democracy from Maryland to Carolina, 1640–1700 (University of North Carolina Press, 2020).

JF: What led you to write Early American Rebels?

NM: All my work starts from the premise that the poor are not stupid. They know when they are being used and abused. But, in most eras on most continents, it’s very difficult to do anything about it. Power has all the weapons and they are relentless in their pursuit of more power and wealth. Working people have only numbers. And there is so much to fear: losing one’s livelihood, one’s health, the unknown future. So organizing ourselves to act collectively and then maintaining that solidarity over time and under varying pressures is a very tough road to climb. That’s why revolutions occur so rarely.

This is my third book on southern colonial history. As an immigrant myself, who grew up on one side of the Atlantic and crossed in my early twenties, I identify with the first generation of settlers along the North American coastline. I understand how one carries over cultural baggage and must adjust to a New World. So I write about those people: in North Carolina (A Very Mutinous People), in Georgia (The Short Life of Free Georgia), and now in Maryland.

Early American Rebels began as a prequel of sorts to A Very Mutinous People. While I was in the middle of the Georgia book, a genealogist contacted me and asked if I was aware that one of the Mutinous People protagonists had been in trouble in Maryland earlier. I was totally unaware; North Carolina historians had always felt that the first settlers came from Virginia. So when the Georgia manuscript had been sent to the publisher, I began to follow up, thinking I would write a small article about this story. But very quickly, I realized I had stumbled into a much bigger story: a whole network of activists had organized and organized and organized over two generations, struggling to establish a society based on Leveler ideals. Levelers were the radicals of the English Revolution: they wanted a society with a level playing field: no monarchy, no aristocracy; a vote for every man. Equality. We think of that as a basic American value, but it was revolutionary in the seventeenth century. And too often, Americans are taught that those ideals came from Virginia planters of the eighteenth century. But that is wrong. Poor indentured servants a hundred years before the American Revolution held those ideals and fought for them.

JF: In two sentences, what is the argument of Early American Rebels?

NM: A network of settlers in the Chesapeake region fought for a say in their own governance in the mid-late seventeenth century. American democratic ideals are their legacy.

JF: Why do we need to read Early American Rebels?

NM: It is important for us to understand that we should look to those at the bottom of any society for leadership on how to change it. Early American Rebels gives us a guide on what it takes to create a more equitable world. It warns us how we might fail if the powerful separate us by race and make us compete for the crumbs. I hope you will get a sense of the playbooks of both the rebels and the elite.

NM: That occurred in several stages. The most important was the first day of eighth grade, back in Northern Ireland, when my new history teacher wrote the preamble to the Declaration of Independence on the blackboard and told us to copy it into our notebooks. When I got to the phrase, “it is the right of the people to alter or abolish [their government],” I looked up and met his eyes. I repeated the phrase to him and he nodded, smiling. As a poor Catholic girl growing up during the Troubles, no one had really said that clearly to me and I knew immediately its significance. We mostly studied European history for the rest of high school, but I was hooked on understanding how some people came to have power and some did not. If someone had told me that there was such a job as an historian and that a poor Catholic girl was allowed to have that job, I would have signed up for it at age thirteen. But I had no concept that such a thing was possible.

I studied History as an undergraduate in Northern Ireland, but still did not grasp that I could become a history professor. No women taught history at that university. It seemed that a woman who loved history had one outlet: teach the subject at the high school level. Fast forward some years, an emigration or two and a few adventures and I was working at the University of Tennessee as a staff archaeologist. I saw lots of women professors and graduate students. When my boss told me I needed an MA and history was close enough to archaeology to suffice, I walked across the parking lot to the History department. The first graduate class I signed up for was Colonial America. That was that.

NM: I want to write an economic history from the bottom up. That is, how did the seventeenth-century Atlantic World economy function, starting at the workplace of an indentured woman in the Chesapeake and moving up and out until we finish with the King, politicians and financiers in London. We would see how much work she does to earn enough to eat, how the tobacco she works on, or whatever she produces gets sold and resold, who enjoys the profit at what stage and so on.