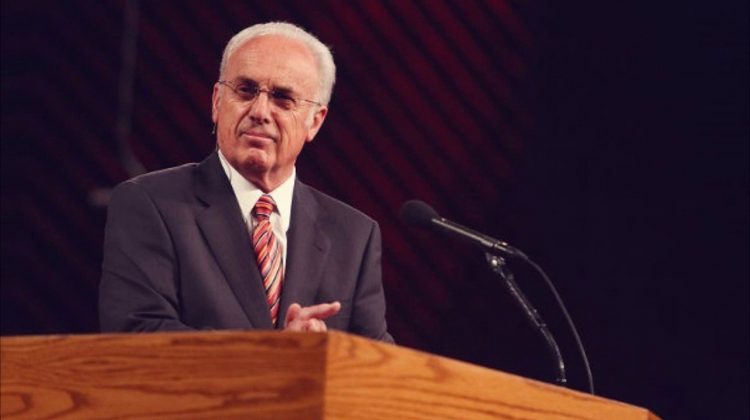 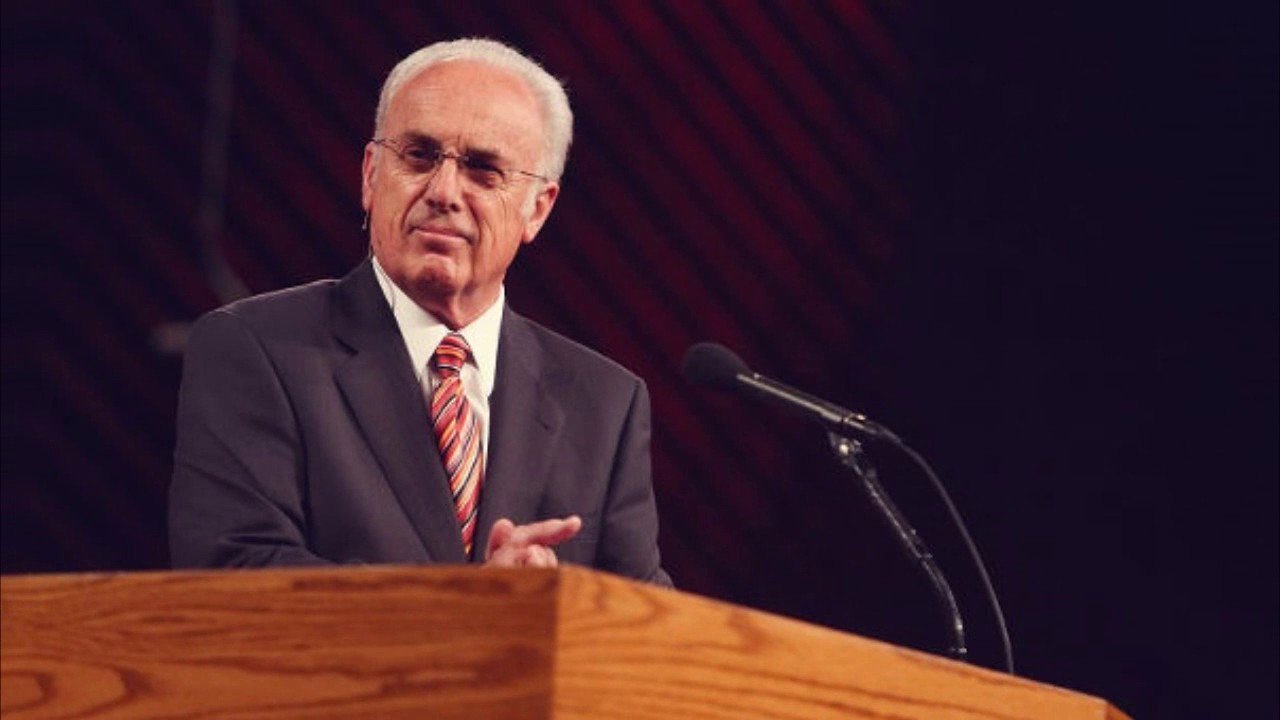 NOTE: Read this post and the addendum. This is an evolving story.

Here is the transcript:

Well this is Friday, and it turned-out to be a really incredible day. When I came into the office the first thing in front of me was a letter from a United States congressman–a wonderful man who have basically been an army infantryman who fought in combat in the Middle East and really had an incredible story. [He] went from there to the United States Congress and from there more recently into pastoral ministry. And he was just expressing gratitude to me for the ways in which the word of God that goes forth here at Grace Church from the pulpit and in books, through all the forms, had impacted his life and how much of what we have been teaching here, he had the privilege of disseminating to the United States Congress. Sometimes we wonder if those people in political power ever do hear the truth of the word of God. But by a faithful congressman, they have heard. What a delightful letter that was.

I was enjoying the warmth of that very sweet note, gracious note, when I heard that President Trump had declared church to be an “essential service.” We’ve always known that for certain, its the most essential of all things. And that he said you can go back to church on Sunday. And he said that on this Friday. And put no restraints whatsoever on the meeting of the church or synagogues or any other religious gatherings and made it very clear that the federal government and the president, the leader of this nation, deemed churches to be essential and encourage people to go back to church.

So in the response to the leadership of our president, we’re gonna go to church. And we’re going to go to church this Sunday. That’s really, really good news. We’re going to start in a responsible way. We’re going to have a service at 8:30 in the morning on Sunday [and] have another one at 10:30. They’re just going to be briefer service [sic]. We’ll have singing, congregational singing. I’ll bring the word of God, in fact I’ll finish the message on fellowship that I started last Sunday. And then we’re going to come around the Lord’s table. We’re going to take communion together as a church family. We’re going to do it in a different way so that we’re thoughtful and careful about that so no one will be concerned that it was in any sense unsafe.

But our president didn’t lay down any demands or mandates for us. There are a lot of narratives floating around out there about the realities of what we’re going through and I think by now all of us know that masks do no good. If you’ve ever touched your mask, stuffed it in your pocket and put it on again it’s useless. We all have heard all the narratives. So we’re just saying come to church–8:30, 10:30. We will have seating in the chapel. We’ll have seating in the family center, the gym, and we’ll have seating in the worship center and you can be wherever you want to be to be comfortable and then we’ll take the Lord’s Supper in a unique way that would remove any concern people would have about folks handling the communion before it gets to you.

So, it’s going to be a wonderful, glorious Sunday. Again, obviously, you don’t have to come to church if you’re not feeling well or if you have someone who’s ill and you want to take special care of them–someone older like me, let’s say. You know those things anyway. Those are reasonable things at any time in life. But beyond that, we want you to come and we are going to sing, in fact we are going to sing our hearts out. I think by the time we’re done on Sunday we’ll have sung at least eight or nine wonderful hymns and heard the word of God and joined around the Lord’s table.

So welcome back to Grace Church. That’s this next Sunday, May 24.  Just two days from now. We look forward to coming together and seeing the blessing of God in the reunion. See you on Sunday.

Rod Dreher has some good thoughts here, but I want to focus on something else.

MacArthur is a big fan of Romans 13. This is the passage that exhorts Christians to “be subject to the governing authorities, for there is no authority, except that which God has established…Consequently, whoever rebels against the authority is rebelling against what God has instituted, and those who do so will bring judgment on themselves….”

This passage has been used in a lot of interesting ways throughout American history. Unlike others who champion Romans 13, MacArthur has been consistent. He has even claimed that the American Revolution was a sinful event. I have no doubt that MacArthur’s view of Romans 13 is at work in his decision to re-open Grace Community Church.

As several pundits and scholars have noted, the authorities here are the state governors. Today the 9th Circuit Court of Appeals agreed. It upheld California Governor Gavin Newsom’s ban on in-person church services.

By opening tomorrow, is MacArthur following Romans 13? Or is this a sinful act of rebellion against the Supreme Court and the governor of his state? I am sure he will have an answer.

Well, after all of that, it now looks like Grace Community Church WILL NOT OPEN tomorrow. Here is the press release:

We were elated yesterday morning when President Trump declared churches to be essential, asked us to open this very Sunday, and promised to fight any state government that tried to stand in the way. As I’ve said many times, the Bible would have us submit to the governing authorities, and in the United States, there is no higher human executive authority than the president, who was speaking on a matter of federal and constitutional interest, specifically the First Amendment.

With that said, at our last elder meeting, we talked about how this situation was changing not just day-by-day, but even hour-by-hour, and that sadly turned out to be true here. Late Friday night, the Ninth Circuit, which is generally known as the most left-wing and anti-biblical circuit court in the nation, ruled 2-1 in favor of California Governor Newsom’s statewide stay-at-home order, rejecting an emergency motion to allow for religious services to proceed.

To say that we strenuously disagree with this decision would be an understatement. All credible data show that this coronavirus is far less dangerous than initially projected, even while the economic, mental, and spiritual toll of an extended lockdown order is far more dangerous. Meanwhile, although the initial response arguably might have been somewhat even-handed, as the situation has developed, religious organizations have increasingly been unfairly treated, even targeted.

For a state like California to decide that abortion providers, marijuana dispensaries, and liquor stores are “essential” while churches are forced to the back of the line via a seemingly endless series of moving goalposts and ever more restrictive hoops to jump through, is the very essence of upside-down Romans 1 immorality. We stand against it plainly, and moving forward, we are striving to pursue every biblical and legal means to oppose it.

Even so, for now, the Ninth Circuit decision is sadly the law of the land in California, and we gladly submit to the sovereign purposes of God.

Separate and apart from the legal questions raised above, our worship services are not to be times of media circus and frenzy, particularly when we gather around the Lord’s Table. To prevent that from occurring, the elders of Grace Community Church desire to delay our reopening and leave it in the hands of God.

We covet your prayers even as we pray for you. We will continue to meet with live stream at 10:30 AM and 6:00 PM, which obviously the Lord has blessed.

It looks like MacArthur remains consistent in his view on Romans 13, but that doesn’t mean he isn’t going to take shot at Newsom and the 9th Circuit. In addition to this press release, the Grace Community website states:

Ninth Circuit Court Rules Against the President and Churches: Late Friday night, the Ninth Circuit, which is generally known as the most left-wing and anti-biblical circuit court in the nation, ruled 2-1 in favor of California Governor Newsom’s statewide stay-at-home order, rejecting an emergency motion to allow for religious services to proceed.