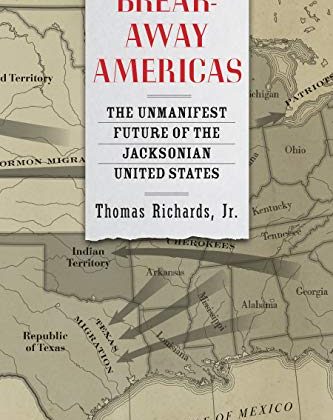 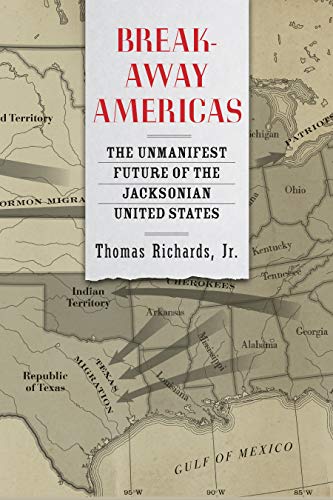 JF: What led you to write Breakaway Americas?

TR: This book began with two seemingly disparate nineteenth-century histories: Texas and Canada. As a first-year graduate student, I was particularly intrigued by two works on Texas: Andrés Reséndez’s Changing National Identities at the Frontier and the late Andrew Cayton’s essay “Continental Politics: Liberalism, Nationalism, and the Appeal of Texas in the 1820s,” found in the edited volume Beyond the Founders. Both authors argued that the Anglo-Texans who migrated to late Mexican Texas and the Republic of Texas were not US expansionists or filibusters. Rather, they were genuinely attracted to various aspects of life in Texas, much of which they believed improved upon that of the United States.

At the same time, I started researching the 1838 “Patriot War” on the US-Canadian border, in which Americans invaded Canada in an effort to restart the failed Canadian Rebellions. As with Texas, this struggle has often been portrayed as American filibusters seeking to expand US territory. Yet, American Patriots rarely mentioned the United States, and, if they did, it was with disdain – just like many early Anglo-Texans. After all, the United States in the late 1830s was mired in economic depression, social unrest, and political dysfunction. To my surprise (and delight as a historian), American Patriots even routinely references the Republic of Texas to explain their goals, as they hoped to create a “northern Texas” that offered them land and prosperity, in contrast to a US seemingly on the decline.

After seeing such similar rhetoric in such disparate places, I widened my gaze: what did Americans in Oregon Territory think about the United States? Or those in Mexican California? What did the Mormons think as they moved to the Salt Lake Valley (then part of Mexico)? Or even “removed” Natives in US Indian Territory? If both Anglo-Texans and American Patriots forecasted a permanent US decline and better alternatives beyond US borders, what did these other groups think? Sure enough, they held similar notions of the future – although the ideals each group sought to realize were markedly different.

JF: In two sentences, what is the argument of Breakaway Americas?

TR: Until the mid-1840s, a majority of Americans did not believe US expansion would occur in the near future, and therefore those who migrated beyond US borders sought to create their own “breakaway Americas” that improved upon the United States. Yet, while their prediction was quite logical, it turned out to be utterly wrong, as a series of unforeseen and unlikely contingencies drastically changed the trajectory of US politics, making what once appeared unlikely to become “manifest destiny.”

JF: Why do we need to read Breakaway Americas?

TR: For three reasons. First, from a historiographic standpoint, this book proves that explaining US expansion through the ideology of “manifest destiny” needs to be permanently abandoned. While historians have long demonstrated that this ideology masked the violence and racism of US conquest, most continue to assume that a majority of Americans – both within the United States and beyond its borders – predicted and supported US expansion. This was simply not the case.

Second, from an informational standpoint, this book brings together a wide range of people and groups rarely examined together (and sometimes hardly examined at all): Mormons, Removed Natives, Anglo-Californians, Anglo-Texans, Americans in Oregon Territory, and even the American Patriots who invaded Canada. All of these groups are fascinating, both for their shared prediction that US borders would forever stop at the Rocky Mountains, and for how much they differed among one another, all while embracing various aspects of American culture and society.

Third, from a presentist standpoint, this book places a great deal of weight on the concept of historical contingency, by which I mean that the past is just as much shaped by unlikely and unpredictable in-the-moment events as it is by larger structural forces. For those who lament our current political dysfunction and seemingly unbreakable cycle of hostile partisanship, the concept of contingency offers hope for the future. To be sure, it can also offer despair – no one knows how the next unpredictable event will play out (indeed, my book laments the violence of US expansion that resulted from the contingencies of the late 1830s and 1840s). Yet, at the very least, just as nothing was destined in the past, nothing about our present moment is “baked in.” Change can happen in unforeseeable ways.

TR: Ironically, my personal story directly contradicts the argument of my book: there is almost nothing contingent about my journey to becoming an American historian. Indeed, it may have been “baked in” as early as age three, when my father took me to Gettysburg for the first time. In kindergarten, I wrote a story about Ben Franklin. I majored in history as an undergraduate at Penn, and immediately started teaching it at a Philadelphia high school the following year. No one who knew me was surprised when I returned to graduate school at Temple to get my Ph.D. in history. While I have other historical obsessions beyond simply the early American republic–Byzantium, for example–I cannot read ancient Greek, so American history was the most logical obsession to pursue.

TR: I am writing a trade book that will tell the story of early American politics through the lens of the various “roads not taken” – or, more accurately, roads taken that eventually led to dead ends. For example, I’m writing a chapter on the rise and fall of female suffrage in early New Jersey, and another chapter on the Kentucky court fight of the mid-1820s, in which two courts claimed legitimacy and sparred over economic relief measures for the poor. Once again, I’m placing an importance on contingency: these moments that seemed so alien and anomalous in retrospect, could have, under only slightly different circumstances, turned into the norm.