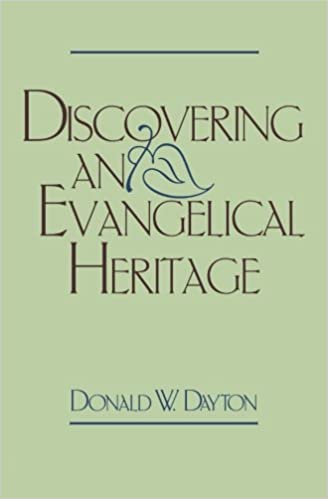 While I was a student at Trinity Evangelical Divinity School pursuing an M.A. in American church history, I read a lot of Dayton. As a young evangelical, I was passionate about exploring the roots of the movement that I embraced as a sixteen-year-old kid. I read Dayton’s Discovering an Evangelical Heritage as well as his unpublished essays that circulated among evangelical scholars and graduate students.

One of those unpublished pieces was a paper Dayton read in January 1988 at the Wesleyan/Holiness Study Project First Fellows Seminar at Asbury Theological Seminary. It was titled, “An Analysis of the Self-Understanding of American Evangelicalism With a Critique of its Correlated Historiography.” The paper criticized what Dayton believed was a Reformed bias in evangelical historiography.

At the time I encountered Dayton’s work in the early 1990s, Reformed historians such as George Marsden and Mark Noll were at the height of their scholarly game. Their books and articles were shaping our understanding of American evangelicalism in profound ways. Dayton did not have the funding Marsden and Noll enjoyed. He did not publish his work in places that would have been respected by the larger academy. But he was relentless. He insisted that modern evangelicalism was a Protestant movement with roots in the Pietist, Wesleyan, and Holiness traditions. Evangelicals, he argued, were abolitionists, feminists, reformers, and defenders of social justice. While Marsden and Noll wrote about Jonathan Edwards, revolutionary-era Calvinists, Old and New School Presbyterians, common sense realism, Princeton theologians, and J. Gresham Machem, Dayton called attention to Jonathan Blanchard, Charles Finney, Theodore Weld, the Tappan brothers, Phoebe Palmer, and A.B. Simpson. Much of his work provided a historical foundation for the Evangelical Left.

To be fair, Marsden’s work on fundamentalism and evangelicalism did take into consideration the revivalist tradition. His books covered D.L. Moody, Billy Sunday, Billy Graham, and the Keswick Movement. (I seem to remember hearing or reading a story somewhere about Dayton giving Marsden a bag of books on Holiness and Wesleyan church history as he was writing either Fundamentalism and American Culture or his history of Fuller Theological Seminary, Reforming Fundamentalism). But I always thought Dayton’s work did not get the attention it deserved. While Marsden and others privileged a Reformed interpretive lens, Dayton tried to imagine what the story might look like if told through a Pietist/Wesleyan/Holiness lens. Dayton believed that this lens offered a clearer vision of the subject at hand.

Much of this debate is covered in Doug Sweeney‘s 1991 Church History essay, “The Essential Evangelicalism Dialectic: The Historiography of the Early Neo-Evangelical Movement and the Observer-Participant Dilemma” (now republished in this book) and in a 1993 issue of the Christian Scholars Review. At the time of Sweeney’s essay (which drew heavily on his own Trinity Evangelical Divinity School M.A. thesis–Sweeney was a few years ahead of me at TEDS), I was corresponding with Dayton about my thesis on separatist fundamentalism. At the moment, I do not have access to that correspondence (no time to find a box of correspondence in the basement for a blog post), but I was able to dig up a July 14, 1991 handwritten letter on Northern Baptist Theological Seminary stationary:

I just got your letter of June 23. I’m in the Orient most of the summer, but was back for a couple of days, before [I’m] off again ’til about Aug. 8. Hence this hurried, informal response.

You have permission to quote my paper. I’ve enclosed a copy plus a couple other articles along the same line. I plan to finish  in Aug. or Sept. a major statement in critique of George’s history of Fuller. I’ll try to remember to send you a copy.

I’ve mixed feelings about Doug Sweeney’s published essay. I liked the thesis better. I wonder if [Carl] McIntire is as “Reformed” as you indicate. Certain features (revivalism, premillennialism, no-smoking, drinking, etc.) would not be as classically Reformed, would they?

I’ll be back August 8 or so–and would be glad to get together sometime.

A few notes on this letter:

Nine years later, we resumed our correspondence while I was a post-doc in the Lilly Fellows Program in Humanities and the Arts at Valparaiso University.  I wrote Dayton after a Monday afternoon colloquium devoted to a discussion of Alan Wolfe’s October 2000 Atlantic cover-story titled “Opening the Evangelical Mind.” I was interested in how the road to evangelical “openness” (to use Wolfe’s term) ran through Dutch theologian Abraham Kuyper and the broader Reformed tradition. At the time of Wolfe’s piece, the discussion among evangelical academics (especially among historians) had shifted from the debate over the theological roots of fundamentalism/evangelicalism to the state of evangelical thinking and the implications of Mark Noll’s 1994 book The Scandal of the Evangelical Mind.

Noll, Marsden (his 1997 book The Outrageous Idea of Christian Scholarship was part of the discussion), and others advocating for a renewal of the evangelical mind were building their case on the assertion that American evangelicalism–at least in its 19th and 20th-century manifestations– was a a largely anti-intellectual movement. American evangelicalism, Noll argued, had been so focused on personal piety, activism, evangelism, and acts of social justice that it ignored or downplayed Christian thinking. To me it seemed that in order for these Reformed evangelical historians to make a case for the revival of an evangelical mind, they needed to embrace Dayton’s historiography.

In an October 2000 e-mail, I asked Dayton if he thought the 19th-century Pietist/Wesleyan/Holiness tradition had become the bogeyman for what Wolfe described in The Atlantic as the “opening of the evangelical mind.” I wondered if the current Reformed push for a renewed intellectual life among evangelicals meant that Dayton had won the historiographical battle. In other words, evangelical thinking was necessary in 1994 because 19th-century evangelicalism was defined by the people, ideas, and actions that Dayton had always put at the center of his story. Evangelicalism was more about Finney, Palmer, and Weld than it was about Edwards (and his theological descendants), Warfield, and Machen and this is why renewed Christian thinking was now necessary.

Here is Dayton’s response to my e-mail, sent from his Drew University e-mail account:

I was intrigued by your note and wished I could have been present for your discussion. I tried to call last night and left a message on your voice mail. I may try again. I just saw the Wolfe article as I passed through the airport over the weekend and just read it late last night.

As you probably know, I resist the word evangelical not only because it usually carried the “reformed” connotations but because it fails to convey the historical and sociological reality of what seems to me is really going on.

For me it is noteworthy that we have had pentecostal seminaries only for a couple of decades and holiness seminaries only a generation before that (Asbury took off after WW II, followed by the Nazarenes, Anderson, Western Evangelical, etc.). Part of the issue is whether to see the evangelical seminaries in that line and revealing a similar dynamic of constituencies moving into the middle class (like Pentecostals) and needing a seminary. This is clearly true for Trinity (carried by the Evangelical Free Church–and holiness-like founder [Rev. Frederick] Fransen), and I would argue Gordon (rooted in the ministry of holiness Baptist A.J. Gordon, a major figure in the development of “faith healing”), and even for Fuller, as I argued in my dialogue with Marsden in Christian Scholars Review. If this is true, it seems odd to me to compare the emergence of these very young traditions of theology and intellectual activity with Reformed and Lutheran [which have] half a millennium of university theological tradition. I don’t even know how to dialogue with people like Wolfe who don’t seem to me to see what is going on.

Nor do I know how to enter a discussion with people like Mark Noll (his SCANDAL book). It seems very odd to me to stand in a college that was founded by the Wesleyan Church in the Holiness Movement (ala Jonathan Blanchard), to claim that it is the best available, and then blame the holiness movement for the fact that it is not better. [Noll was at Wheaton College at the time]. The holiness folk founded a majority of the Christian College Coalition schools–especially the better ones (Wheaton, Seattle Pacific, Azusa, Houghton, Gordon–both branches, etc.)  Mark [Noll], Rich Mouw and others were raised in baptistic fundamentalism, went to holiness schools and then grafted themselves into the Reformed tradition (Princeton Theological Seminary for Mark,  CRC & Kuyper for Rich) to do their intellectual work. I understand this; my own theological formation is essentially Barthian and I teach Calvin regularly. But I do object to reading these personal pilgrimages back into the history and confusing genealogy with teleology (Marsden on Fuller or the usual interpretations of the history of Wheaton, emphasizing Blanchard’s Presbyterianism and ignoring the fact that it is “Oberlin Perfectionism” that is at issue).

It is the failure to understand “evangelicalism” historically that leads to such strange claims as those of [Gordon-Conwell Theological Seminary theologian] David Wells that there is an intellectual “decline” in “evangelicalism” since Edwards that has not been recovered. But here again we are comparing apples and oranges–Yale and Princeton with “new” schools founded in the 19th and 20th centuries that have NO historical or theological continuities except as products of the latter engraft themselves into the theological traditions of other cycles of theological tradition to enter the intellectual world to achieve a sort of intellectual respectability that involved the betrayal of both their class interests and their theological traditions in which they were reared and/or educated!

Whatever one thinks about this letter, it was classic Donald Dayton. He was less concerned about defending the theological convictions of the Pietist-Wesleyan-Holiness tradition than he was about getting the history correct. He did not hesitate to call out other scholars for their supposed ambition. This latter claim was the reason why so many Christian academics saw Dayton as a real pain in the ass (and I say this as compliment). The debate continues.

Here is a reflection on Dayton’s life from his former Drew University student Christian Collins Winn:

Donald (“Don”) W. Dayton was by all accounts brilliant, a voracious reader and lover of books, and one of the foremost interpreters of American religious history. Very few scholars produce work that shapes their generation, even fewer break genuinely new ground that has the potential to shape generations to come. Dayton’s work rose to this level of significance. As a scholar, his contributions in both the historiography of evangelicalism and in the historiography and theological interpretation of the Holiness Movement and Pentecostalism have fundamentally altered our interpretation of American religious history.

Not without controversy—in keeping with the nature of any truly groundbreaking perspective—Dayton had a striking genius for reading against the grain of accepted scholarship, unlocking alternative construals and opening up new pathways for interpretation and appropriation often taken up by later scholars. Many of his early proposals were rejected by established scholars, only later to be embraced; others continue to wait for the academy to catch up. Don also made major contributions through his extensive ecumenical work, where he advocated for marginal voices and traditions to be taken seriously and given a seat at the table. Moreover, his influence can be discerned in the lives and ongoing scholarship of the hundreds of students whom he mentored with his hallmark generosity and loving patience.