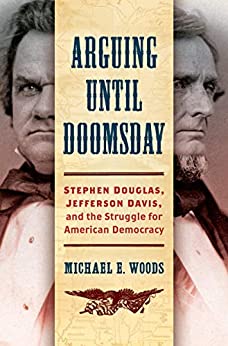 Michael E. Woods is currently Associate Professor of History at Marshall University. Starting in August 2020, he will be Associate Professor of History and Director/Editor of the Papers of Andrew Jackson at the University of Tennessee, Knoxville. This interview is based on his new book, Arguing until Doomsday: Stephen Douglas, Jefferson Davis, and the Struggle for American Democracy (The University of North Carolina Press, 2020).

JF: What led you to write Arguing until Doomsday?

MW: Initially, I envisioned Arguing until Doomsday as an article, not a book. The inspiration came from two sets of sources I encountered during the research for my first book (Emotional and Sectional Conflict in the Antebellum United States [Cambridge, 2014]). The first surfaced in the archives: I spent some time exploring Stephen A. Douglas’s papers at the University of Chicago and was struck by the amount of supportive mail he received from Republicans, including staunchly antislavery Republicans, during the late 1850s. The second appeared in the Congressional Globe, a staple for anyone doing work on antebellum political history: the extended debate between Douglas and Mississippi senator Jefferson Davis in May 1860, which unfolded just as their Democratic Party was tearing itself apart over selecting a presidential candidate and writing a platform. Together, these sources suggested that we needed to rethink the relationship between antebellum sectionalism and the Democratic Party. Specialists are familiar with the Democratic split in 1860, but in some narratives it appears almost out of nowhere. Yet there were portents of the rupture—such as Douglas’s rather surprising fan mail in 1857 and 1858—that appeared well before 1860. I decided to use Davis and Douglas’s careers to tell the longer history of that intraparty conflict. And because I wanted to situate both men in the contexts of their home states, I realized that I would have to write a book-length study.

JF: In two sentences, what is the argument of Arguing until Doomsday?

MW: The 1860 rupture of the Democratic Party was the product of long-term conflicts over balancing property rights and majoritarianism: Stephen Douglas’s primarily northern faction pressed for localized white men’s majority rule, while Jefferson Davis’s primarily southern faction demanded the federal defense of slaveholders’ property rights. In the context of rapid expansion and heightened pressure from pro- and antislavery activists, Democrats like Davis and Douglas could not permanently reconcile these competing agendas, and their efforts to control the party ultimately tore it apart.

JF: Why do we need to read Arguing until Doomsday?

MW: The book reexamines a vital topic—antebellum sectional strife and the origins of secession and the Civil War—from a fresh perspective, enlivened by a dual-biographical approach. Davis and Douglas are typically paired with Abraham Lincoln, but Arguing until Doomsday revisits them from the vantage point of a rivalry that played out within the Democratic Party but across sectional lines. This perspective helps us to understand how sectionalism and partisanship intertwined in sometimes surprising ways. Some southern Democrats, for instance, called for secession in the event that Lincoln or Douglas won the 1860 presidential election. Simultaneously, there were southern critics who denounced Davis as too soft on defending slavery, even as northern Democrats worried that Davis would destroy the party by forcing a proslavery platform on them. These dynamics become much easier to understand if we trace the long rivalry between Davis and Douglas, who began speaking for frankly sectional constituencies when they entered Congress in the mid-1840s.

MW: I can’t remember a time when I wasn’t fascinated by American history, but my inspiration to make a career of it came near the end of my undergraduate studies, when I took a seminar (on Chinese history, actually). History is all about conversations, whether carried out in person in the classroom or in print, from one scholar to another. I relished participating in both types of conversations in that seminar and I decided I wanted to continue with them, as a teacher and a scholar.

MW: I’m working on another biographical project that focuses on John H. Van Evrie, a shadowy figure who was one of the most extreme and outspoken racist propagandists of the mid-nineteenth century. Born in Canada, Van Evrie built a twenty-five year career in New York City as a writer, newspaper editor, and publisher who dedicated himself to promoting white supremacy—a phrase he actually introduced into popular usage. Van Evrie is neither sympathetic nor inspirational, but I think he can help us to trace precisely how ideas about race and slavery and freedom circulated at a time when information was moving more cheaply and swiftly than ever before. We usually think of the nineteenth-century communications revolution, made possible by innovations like the telegraph and the rotary printing press, as a good thing. But Van Evrie’s career exposes a sinister side of that revolution. New communications technologies are only as edifying as the messages they carry and the people who use them.