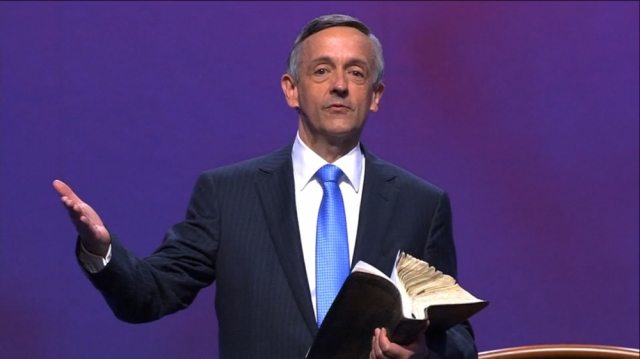 If you had thirty minutes to say something to the most powerful man in the world, what would you say?

This is how I started our short series titled “Three Sundays in April.”

On April 12, 2020, Donald Trump watched the Easter Sunday service at Robert Jeffress‘s First Baptist Church of Dallas, Texas. What did he hear?

Jeffress, at age 64, is younger than Greg Laurie (the subject of Part 2 in our series), but he is much more traditional. I don’t think I have ever seen him without a suit and tie. His hair is cut short. He carries a big Bible. And his church has a robed choir.

While Jeffress has long-been a celebrity in Southern Baptist circles, I had never heard of him until he made national headlines during the 2012 presidential campaign. In October 2011, Jeffress was in Washington D.C. to introduce Texas governor Rick Perry at the annual Values Voters Summit. After he completed his introduction, Jeffress told reporters that Mitt Romney, one of Perry’s opponents in the GOP primaries and a practicing Mormon, did not deserve the votes of evangelical Christians because he was a member of a cult.

After a little research, I learned that this was not the first political stunt Jeffress has pulled. He has always loved the limelight. In May 1998, while serving as the pastor of the Wichita Falls (TX) Baptist Church, Jeffress led a protest against the Wichita Falls Public Library for acquiring books titled Heather Has Two Mommies and Daddy’s Roommate. After a member of his congregation checked these books out of the library and showed them to Jeffress, the pastor wrote a check for $54.00, sent it to the library, and vowed never to return the books. According to the Associated Press, the plan backfired.

In December 2010, his third year at First Baptist-Dallas, Jeffress created a website–grinchalert.com–to shame local stores that advertised using “Happy Holidays” instead of “Merry Christmas.” There was a place on the website where readers could add a store to the “naughty list.” Jeffress appeared on CNN to defend his antics.

Today, Jeffress can be seen regularly on Fox News and Fox Business News. If there is an opportunity for a Trump photo-op with evangelical leaders, Jeffress is on the first plane from Dallas Washington D.C.  We have covered him extensively here at the blog and I wrote about him in Believe Me: The Evangelical Road to Donald Trump. In addition to his role as a pastor of a large congregation, Jeffress is a culture warrior–a political operative who wants to restore the United States to its supposed Christian roots.

Jeffress grew-up in First Baptist Church-Dallas, a flagship congregation in the Southern Baptist Convention with a long history of racial segregation and Jim Crow. This history, it is worth noting, is absent in a series videos created for the church’s 150th anniversary in 2018. One of the videos extols former pastor W.A. Criswell, one of the most famous Southern Baptist preachers of the 20th century and a segregationist, as a “champion” of “race and family values.” Criswell led Jeffress to faith in Jesus when the current pastor was a five-year-old boy. Jeffress was baptized, married, and ordained in the church. First Baptist-Dallas was the site of his first sermon.

While at Dallas Theological Seminary, Jeffress imbibed the “end times” theology that has informed his numerous popular books, including Twilight’s Last Gleaming: How America’s Last Days Can Be Your Best Days, Countdown to Apocalypse: Why ISIS and Ebola are Only the Beginning, and A Place Called Heaven.  Like Greg Laurie, Jeffress thinks that believers will one day meet God in the air as part of an imminent rapture. Those remaining on earth after the rapture will live through seven years of tribulation before Jesus returns with his saints (the true believers raptured seven years earlier) to establish a millennial kingdom. According to this view of biblical prophecy, Jews will eventually return to Israel, rebuild the temple, and accept Jesus as their Messiah. This explains why Jeffress believes Donald Trump’s decision to move the U.S. embassy from Tel Aviv to Jerusalem was important. God is using Trump to advance His purposes and prepare the world for the last days through the president’s contribution to the restoration of His ancient “capital” city.

When Donald Trump pointed his web browser toward First Baptist-Dallas on Easter morning, he was met with a hearty welcome from Jeffress:

Today I’d like to say welcome to a very special guest visitor, a great friend of mine, our great president Donald Trump. Mr. President, we’re so honored that you would choose to worship with us today. And I know there are millions and millions of Christians all over this country who are not only grateful for you, but they are praying for you regularly for that continued wisdom that comes from God as you navigate us through this crisis we’re in. We are going to get through this, we are going to make it to the other side, but we want you to know we are praying for you.

After his message to Trump, Jeffress introduces the First Baptist choir and orchestra. He tells his listeners that these songs were recorded before social distancing guidelines went into place. The choir begins with the classic Easter hymn, “Christ the Lord is Risen Today.” I am not sure when this music was recorded because the sanctuary is full. Is this from last year’s Easter service? Did the church hold a mock Easter service sometime before the quarantine? I’m not going to try to figure this out. Whatever the case, the music sounded great and it is very appropriate and uplifting for Easter.

When Jeffress comes back on the feed, ready to preach, he offers yet another welcome to Trump. Before he starts his sermon, he says: “Mr. President, our church absolutely loves you.” He adds: “We appreciate your strong articulation of the Christian faith. I’ve never heard a stronger affirmation of faith than the one you gave Friday, Good Friday, in the Oval Office. We thank you for your commitment to religious liberty.”

I have no doubt that Robert Jeffress has preached a version of this sermon every Easter Sunday of his ministerial career. From the perspective of Christian orthodoxy, there was nothing controversial about it. Jeffress focused on the empty tomb, Jesus’s victory over death, and the future resurrection of believers. This is pretty basic Easter fare. He did not mention Trump and he did not talk about politics (although he did take a few shots at liberal theologians who deny Jesus’s bodily resurrection).

But like Laurie on Palm Sunday, Jeffress only got it half right. He failed to mention that Jesus’s resurrection initiated the Kingdom of God. He failed to note that those who embrace the Christian Gospel are citizens of this Kingdom and are thus called to practice a form of citizenship defined by New Testament ethics.

Recently, through my reading of the works of Oxford University New Testament scholar and theologian N.T. Wright, I have been reflecting on the political nature of the Kingdom of God. As I wrote in my last post in this series, the members of this Kingdom must speak truth to the principalities and powers of this world. Citizens of the Kingdom should respect government authority, but must also call the ruling powers to task when it is appropriate. As we read in the New Testament Book of Acts, the earliest Christians found the courage to challenge the authorities of their day through the power of Jesus’s resurrection and the conviction of the Holy Spirit.

Here is part of Wright’s commentary on on 1 Corinthians 15:20-28, a passage that directly connects the bodily resurrection of Jesus Christ to the Kingdom that this resurrection initiated:

We should not ignore the political overtones of this, another letter to a Roman colony. The whole paragraph is about the Messiah through whose “kingdom” (basileia) the one true God will overthrow all other authorities and rulers. “Resurrection,” as in Pharisaic thought, belongs firmly within kingdom-of-god theology; and every first-century Jew knew that kingdom-of-God theology carried inescapable political meaning. The present “ordering” (tagma) of society places Caesar at the top, his agents in the middle, and ordinary people at the bottom; the creator’s new ordering will have himself at the top, the Messiah–and his people, as in [1 Corinthians] 6:2 and elsewhere!–in the middle, and the world as a whole underneath, not however exploited and oppressed but rescued and restored, given the freedom which comes with the wise rule of the creator, his Messiah, and his image-bearing subjects. This passage thus belongs with Romans 8, Philippians 2:6-11 and 3:20-21, as, simultaneously, a classic exposition of the creator God’s plan to rescue the creation, and a coded but powerful reminder to the young church, living in Caesar’s world, that Jesus was lord and that at his name every knee would bow. (N.T. Wright, The Resurrection of the Son of God, 337-338).

Jeffress misses this dimension of the Easter story. For him, Easter is all about Christians getting to heaven. But the Easter message has both “on earth” and “as it is heaven” dimensions. And one day, as the hymn-writer says, “earth and Heav’n [will be] be one.”

Jeffress’s theology leaves no place for the church to speak truth to power. This approach to Easter is pretty common among American evangelicalism. As we will see in our next post in this series, too many evangelical churches offer a kind of cheap grace that measures results in the “decisions” people make–decisions, they believe, that will secure a place for them in heaven.  As a result, the church does not connect the resurrection power of Jesus to the task of social, cultural, and political engagement beyond abortion, religious liberty, and other Christian Right favorites.

Yes, Donald Trump, the most powerful man in the world, needs to hear about saving faith and eternal life in Jesus. (Unless, as many court evangelicals have suggested, he is already “saved”). But Easter is also about the announcement of Jesus as a ruler who will one day topple all the empires of the world. It is time that the evangelical church, especially during Eastertide, reminds the president of this theological reality.