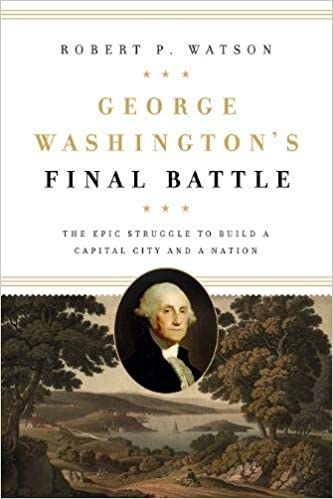 Robert Watson is Distinguished Professor of American History at Lynn University. This interview is based on his new book, George Washington’s Final Battle: The Epic Struggle to Build a Capital City and a Nation (Georgetown University Press, 2020).

JF: What led you to write George Washington’s Final Battle?

RW: I have always admired George Washington and loved the capital city–the majestic government buildings, world-class museums, the National Mall, and the city’s history. However, I have always been surprised and a bit dismayed that most Americans know very little about the capital’s history, the difficult and unlikely story behind the location and design of our national seat of government, and Washington’s role in building the city that bears his name. Yet, it is an intriguing and inspiring story, one that mirrors the forging of the Republic.

JF: In two sentences, what is the argument of George Washington’s Final Battle?

RW: We know George Washington as many things–heroic general, first president, a man of honor and discipline, and so on, but too often we fail to appreciate that he was also a visionary and a man possessing formidable political skills (when he wanted or needed to deploy them, which was the case while building support for the capital city). Both these sides of Washington are on display in his struggle to build a grand capital city.

JF: Why do we need to read George Washington’s Final Battle?

RW: In building a grand capital city along the Potomac, Washington not only realized a personal passion but helped strengthen the fledgling Republic and federal government, imbue his countrymen with a sense of national pride and American identity, and give the new nation credibility in the eyes of Europe.

RW: I grew up in central Pennsylvania, not far from Gettysburg and a Saturday drive away from Valley Forge and Philadelphia. Some of my earliest and most cherished memories were of visiting the many important historic sites in the area. So, I supposed it was through osmosis that I developed a passion for history. I know I picked the right occupation because I never tire of visiting museums, battlefields, and historic sites around the US and internationally.

RW: A book on the Civil War and another book project on the capital city.